IAVA uses real data to drive the development of scalable solutions to benefit veterans and their families. With the best data in the business, IAVA and QRF produce best-in-class data-centered research. Our careful analysis of the member survey and continuous surveillance of data about service members, veterans and their families informs the development of IAVA’s advocacy campaigns and programs.

We Engage Our Members

Our members are a critical part of our advocacy work. IAVA leverages the power of our membership through an in-depth member survey and through frequent flash polls.

We Are A Think Tank

IAVA creates innovative solutions to address the challenges facing veterans, and we regularly publish research reports that provide even deeper insight into these issues.

We Engage Our Members

All of IAVA’s work starts with our members. We regularly survey our members about the challenges they face, their goals for the future, and the current status of the programs meant to serve them. These surveys have one of the largest samples of Iraq and Afghanistan veterans and provide us with an enormous amount of data that guides all the work we do on their behalf. IAVA is the only organization with a research program focused exclusively on all the issues facing veterans of Iraq and Afghanistan. Our team is constantly watching the trends, identifying new challenges, and creating policy solutions and programs to help this generation of veterans succeed. 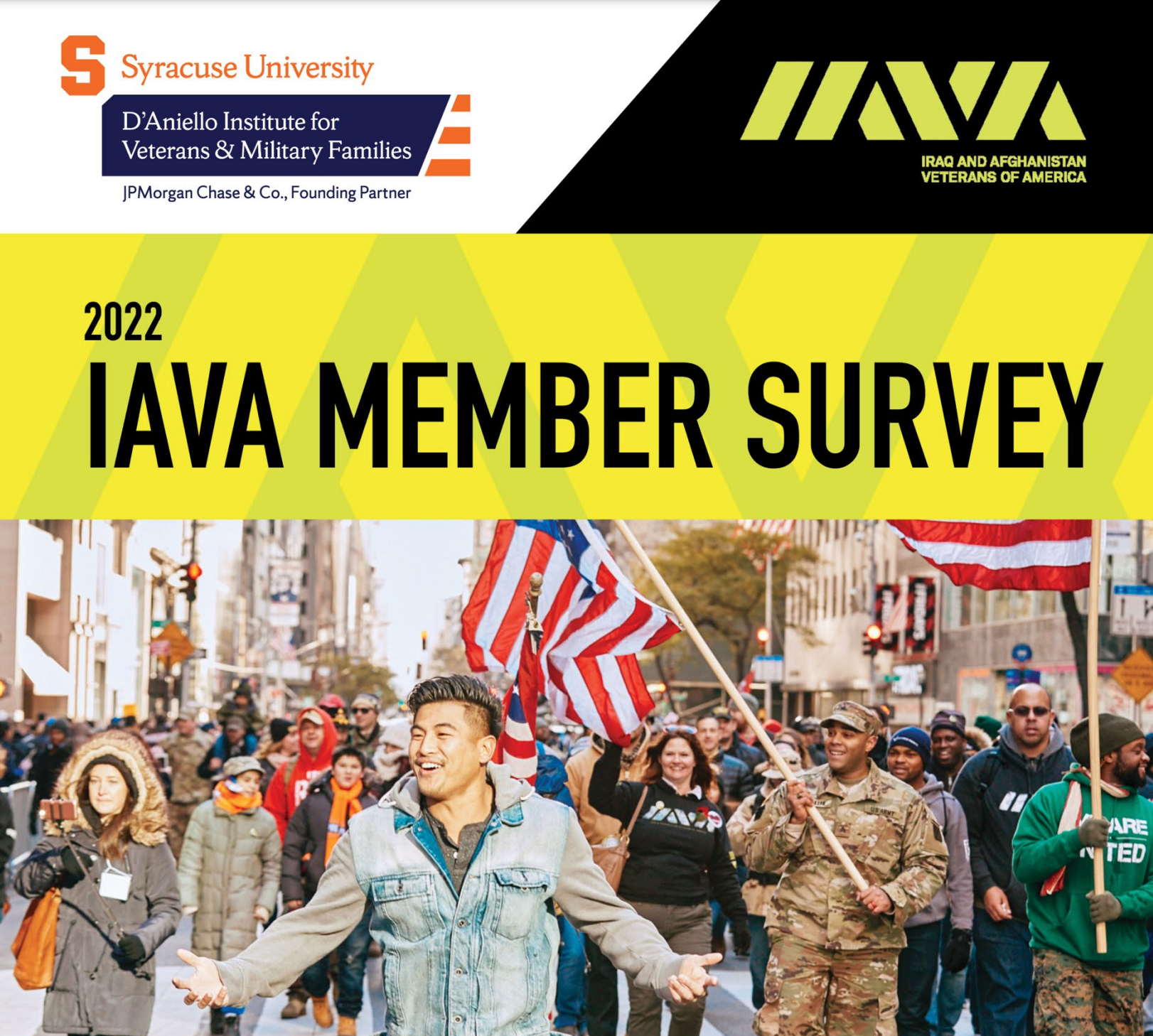 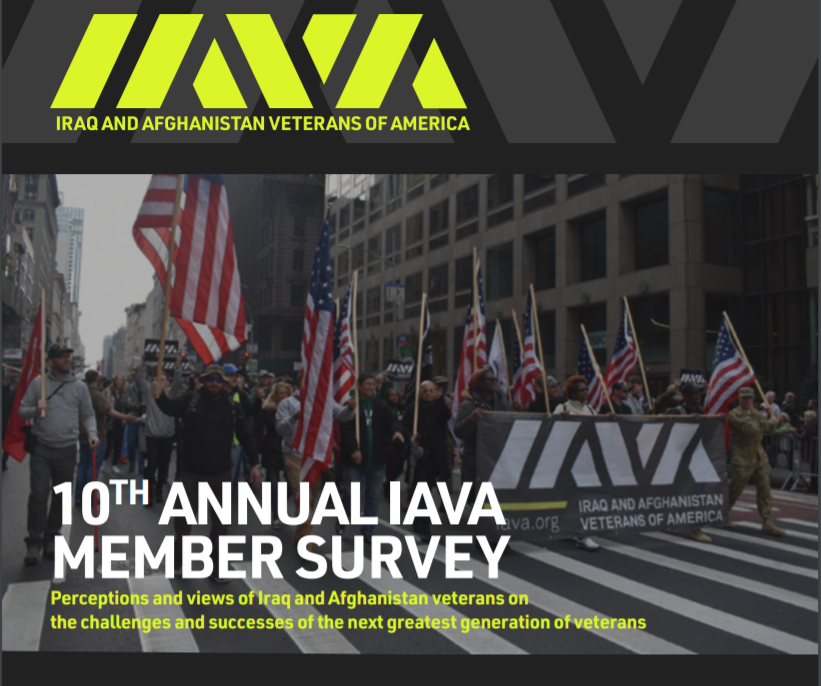 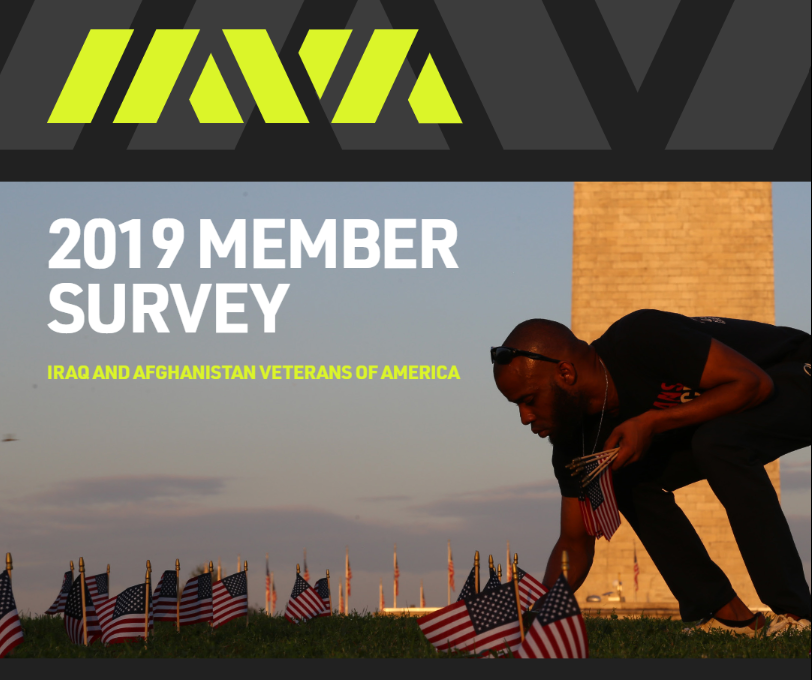 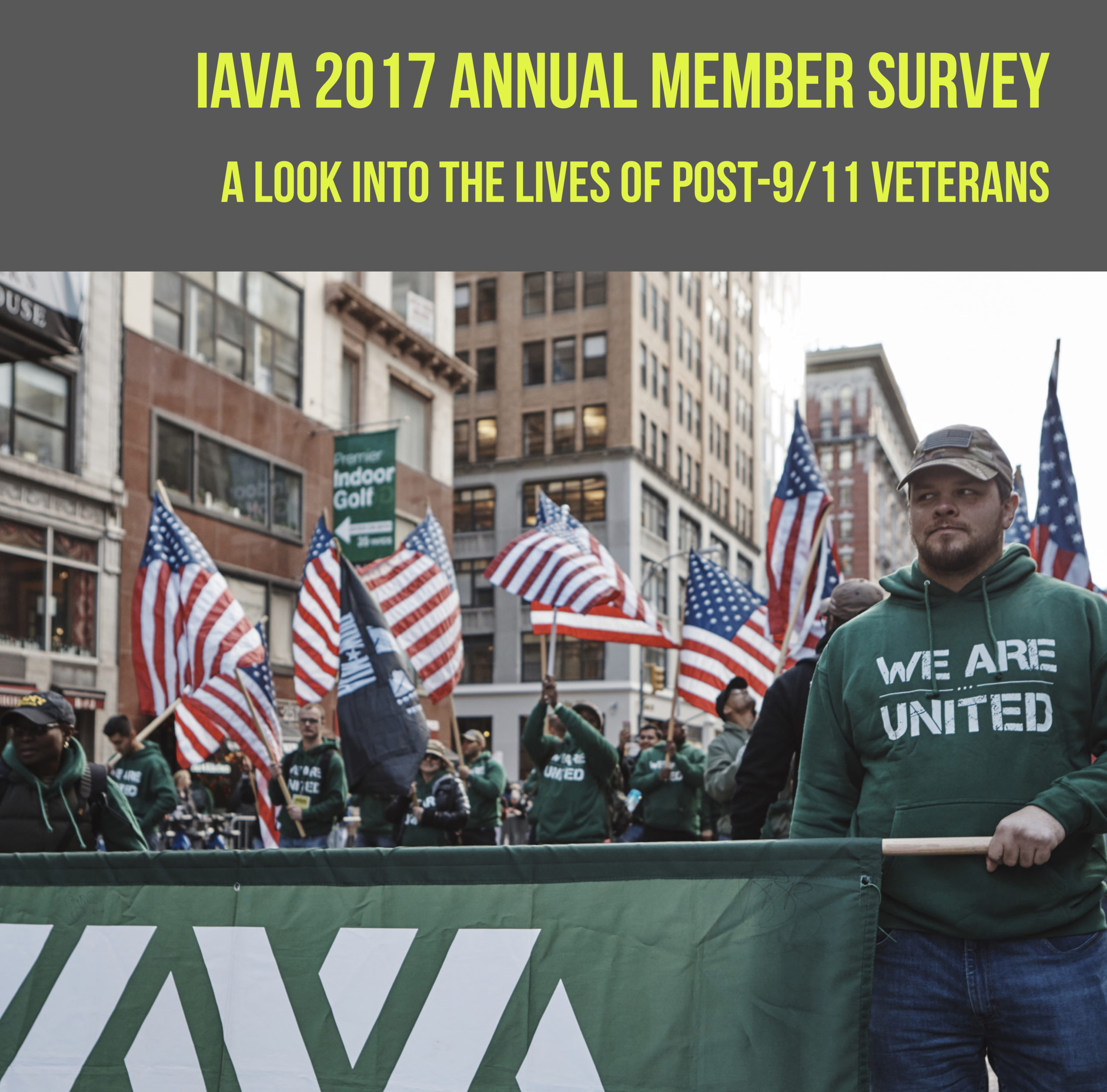 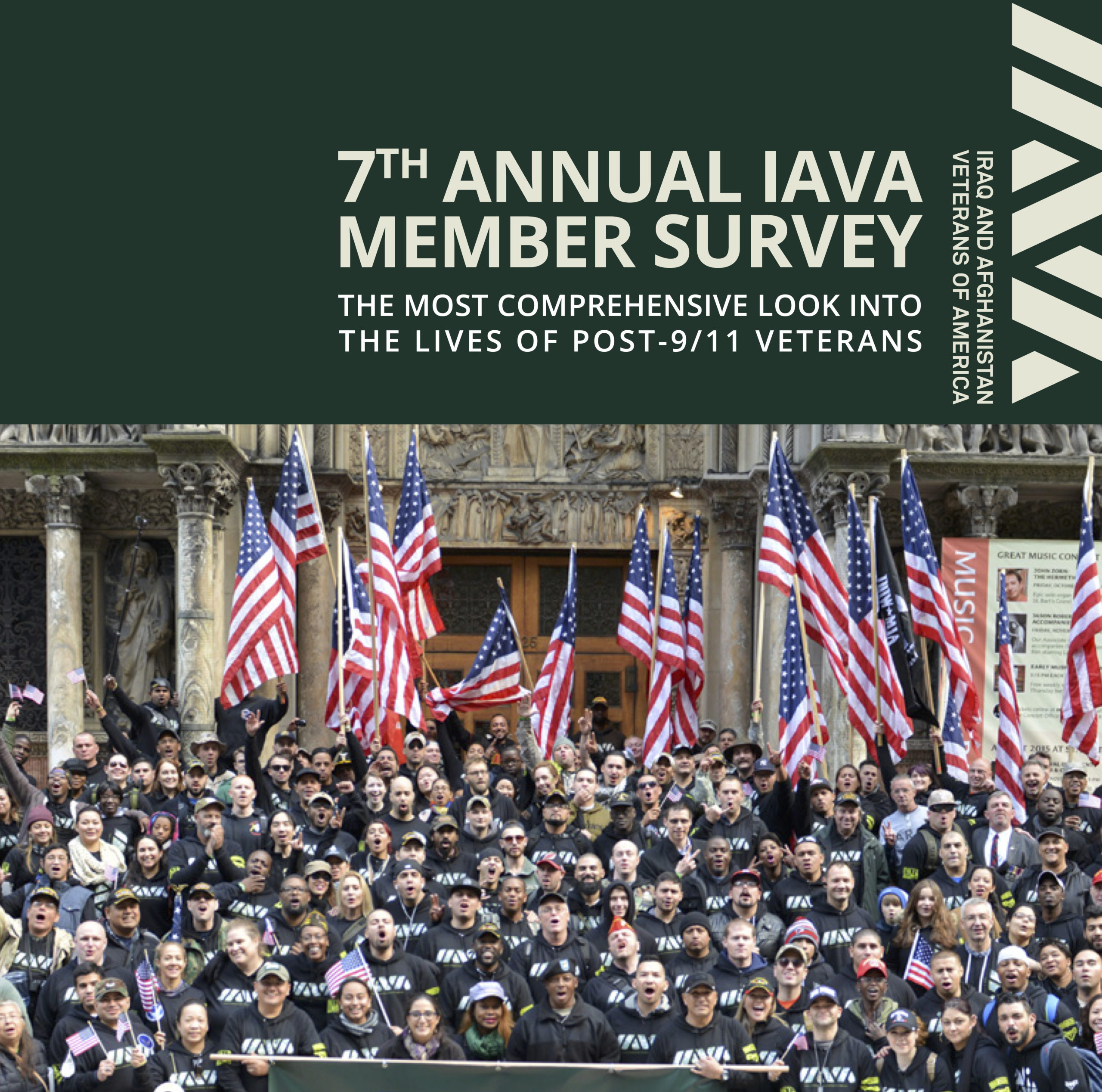 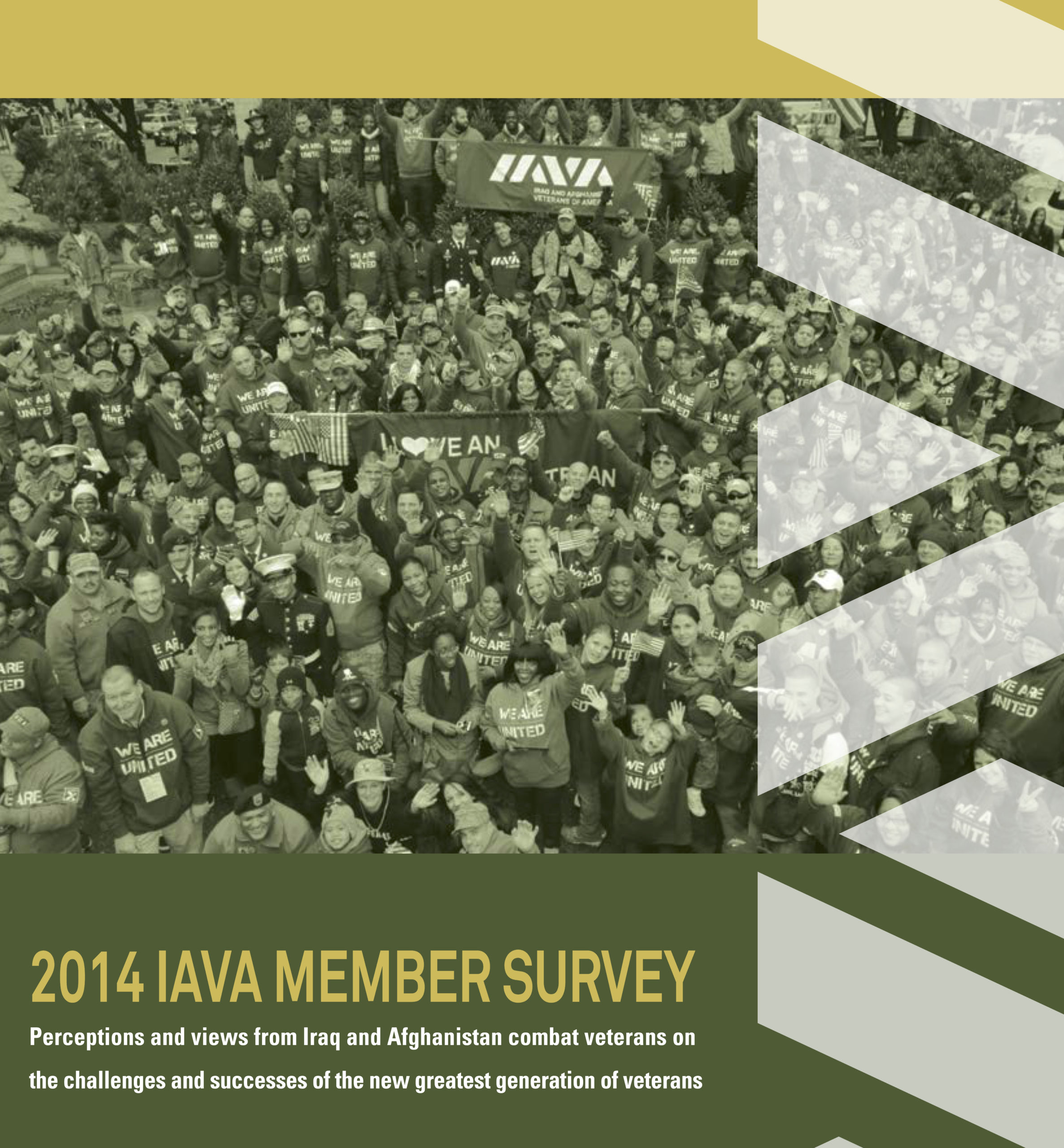 IAVA regularly surveys and polls our membership. Join now if you’d like to participate. Membership is always free!

We Are a Think Tank

Our members are a critical part of our advocacy work. Their stories put a face on veterans’ issues, and they are more than ready to contact their Member of Congress to advocate on behalf of veterans and their families. Our member survey results direct our Policy Agenda, which lays out our vision statement of what policies stakeholders should pursue to better the lives of veterans of Iraq and Afghanistan. IAVA educates veterans and their families about the ways new legislation in Washington can impact their lives through our website, and social media.

The Commander John Scott Hannon Veterans Mental Health Care Improvement Act of 2019 was signed into law, providing much-needed updates related to veteran transition assistance, mental health care, care for women veterans, and telehealth care, as well as a vital provision to find and treat at-risk veterans who do not use the VA.

The Commander John Scott Hannon Veterans Mental Health Care Improvement Act of 2019 passed in the House, clearing the way for the President's signature.

The Commander John Scott Hannon Veterans Mental Health Care Improvement Act of 2019 passed in the Senate and was referred to the House.

The MISSION Act passed in the House with amendment.

Ryan Britch, IAVA's Associate for Government Affairs, delivered a statement regarding suicide prevention to a hearing of the NY State Joint Assembly.

The Commander John Scott Hannon Veterans Mental Health Care Improvement Act of 2019 was introduced in the U.S. Senate, proposing much-needed updates related to veteran transition assistance, mental health care, care for women veterans, and telehealth care, as well as a vital provision to find and treat at-risk veterans who do not use the VA.

After reconciliation of differences between the Senate and House versions, the MISSION Act was signed into law on June 6, 2018 yet not fully implemented until July 2019. This law was considered a WIN for IAVA as it created a consolidated community care program called the Veterans Community Care Program which, relevant to suicide prevention, removed barriers to veterans receiving mental health care. IAVA continues to monitor its implementation.

The MISSION Act passed in the Senate without amendment by unanimous consent.

Melissa Bryant, IAVA's Director of Political and Intergovernmental Affairs, presented testimony before a hearing of the House Veterans' Affairs Committee (HVAC), specifically providing an assessment of the Veterans Crisis Line.

Unanimous approval in the SVAC

The Senate Veterans’ Affairs Committee unanimously approved the Clay Hunt SAV Act as its first legislative action of the 114th Congress. The bipartisan bill was cosponsored by 18 Democrats, 9 Republicans, and 1 Independent.

SAV Act reintroduced in the Senate

Sens. John McCain (R-Ariz.) and Richard Blumenthal (D-Conn.) reintroduced the Clay Hunt Suicide Prevention for American Veterans (SAV) Act in the U.S. Senate. IAVA spearheaded the creation of the bill and praised the Senators for standing with the veteran community.

Unanimous passage in the House

One lone Senator stopped passage of the Clay Hunt Suicide Prevention for America’s Veterans (SAV) Act. Even though IAVA and veterans groups from around the country joined in demanding Sen. Tom Coburn (R-Okla.) release his block on the Clay Hunt SAV Act, the bill died at the end of the 113th Congress when the hold was not released.

After passing the House by a unanimous voice vote, the Clay Hunt Suicide Prevention for American Veterans (SAV) Act (H.R. 5059), critical legislation that will improve access to mental health care, moved to the Senate for consideration. IAVA called on the Senate to expeditiously pass this critical veteran suicide prevention bill.

IAVA veteran members delivered a petition to Majority Leader Harry Reid (D-Nev.) calling on him to bring the Clay Hunt Suicide Prevention Bill to the Senate floor before Congress adjourns next week. The hand-delivered petition includes signatures of more than 59,000 IAVA veterans and family members urging Congress to help reverse the trend of 22 veterans dying by suicide every day.

"IAVA held a day of action on Capitol Hill, rallying in support of bipartisan suicide prevention legislation and calling for Majority Leader Harry Reid (D-Nev.) to immediately bring the Clay Hunt Suicide Prevention Bill to the Senate floor. IAVA veteran members will deliver a petition of more than 57,000 signatures urging Congress to help reverse the trend of 22 veterans dying by suicide every day. "

Before the Senate Veterans’ Affairs Committee (SVAC), Susan Selke, mother of Clay Hunt, a Marine veteran who died by suicide in 2011, urged Congress to take swift action in passing the Clay Hunt Suicide Prevention Bill of 2014.

At a hearing of the House Veterans’ Affairs Committee (HVAC), Susan and Richard Selke, parents of Clay Hunt, a Marine veteran who died by suicide in 2011, urged Congress to take swift action in passing the Clay Hunt Suicide Prevention Bill of 2014. The official hearing topic was "Service Should Not Lead To Suicide: Access to VA's Mental Health Care" and was the first committee mention of the SAV Act. In the announcement of this bill, Susan Selke stood with members of IAVA, Congressional leaders from both parties, and House Veterans' Affairs Committee Chairman Jeff Miller (R-FL) as he introduced the suicide prevention bill that is named after her late son. Alongside other families, Susan shared her gut-wrenching story of losing her son to suicide three years ago.

"IAVA heralded a significant step toward combating veteran suicide in America with the introduction of new, historic and comprehensive legislation introduced by U.S. Senator John Walsh of Montana. To bring attention to this fight, supporters placed 1,892 American flags on the National Mall representing the number of veterans and servicemembers estimated to have died by suicide to date in 2014."

Young veterans from across America participate in IAVA's annual "Storm the Hill" event. Those storming Capitol Hill with IAVA demanded Congress and the President take new action on their top issue: combating veteran suicide. At an event with leading mental health advocates, IAVA announced the “We’ve Got Your Back: Campaign to Combat Suicide” and unveiled IAVA’s 2014 Policy Agenda.

Recognizing the gravity of the trend in veteran suicide, the House Veterans' Affairs Committee (HVAC) held a hearing, "HONORING THE COMMITMENT: OVERCOMING BARRIERS TO QUALITY MENTAL HEALTH CARE FOR VETERANS." This was the first step in the long, on-going battle to combat suicide.

How did IAVA help create the 988 hotline?

The National Suicide Hotline Designation Act (S. 2661) designates 9-8-8 as the national suicide prevention and mental health crisis hotline, helping individuals and families, including veterans, who are experiencing mental health distress to easily access immediate help and resources. IAVA worked diligently as Advocates to get this done.

HAVEN’T FOUND WHAT YOU’RE LOOKING FOR?