New York, NY (February 8, 2018) — Today, following news of President Trump’s proposal for a military parade, Iraq and Afghanistan Veterans of America (IAVA), the leading non-partisan veterans empowerment organization representing the Post-9/11 generation of veterans, released a poll of its members. The poll, conducted from February 7th to 8th over a 24 hour period, shared how veterans view the proposal: 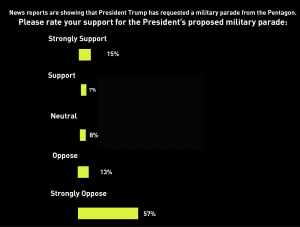 “It is clear that our community has strong opinions on this issue. Their voices are critical and must be heard. We hope leaders in the Pentagon and White House will listen to our members—especially in these decisive and overly-politicized times,” said Paul Rieckhoff, Founder and CEO of IAVA. “We, as much as anyone, are committed to honoring and empowering our military and veterans—and that starts by listening. Most of all, our members believe America should honor and support our military and veterans everyday, and in the ways and times we need it most. Guided by our dynamic and diverse membership, IAVA has plenty of important recommendations for how to do it in our annual Policy Agenda. We encourage all lawmakers, members of the media, and our fellow citizens to spend some time reading this playbook for how we believe our country can support us most effectively, on the issues we care about the most.”

Emails were sent to IAVA’s members inviting them to participate in IAVA’s poll on a military parade. The poll was available for 24 hours, from 3 PM on 2/7/18 to 3 PM on 2/8/18.  The results represents only data collected from the military and veteran community.

4,615 IAVA veteran members and service members participated in the survey with a 100% completion rate. The margin of error for this poll is +/- 1.4 percentage points at the 95% confidence level.