New York, NY (June 27, 2018) — As the Senate Committee on Veterans’ Affairs readies for a confirmation hearing today at 2:30PM ET for Mr. Robert Wilkie to be the next Secretary of the Department of Veterans Affairs, Iraq and Afghanistan Veterans of America (IAVA), the leading voice of the Post-9/11 generation of veterans, revealed results of an exclusive poll of post-9/11 veteran views of the nominee. The poll, conducted over a two-day period and surveying more than 1,200 IAVA veterans and servicemembers, found that 41% of veterans support Mr. Wilkie for the role of VA Secretary, 14% did not and 42% were undecided about him for the critical leadership position. 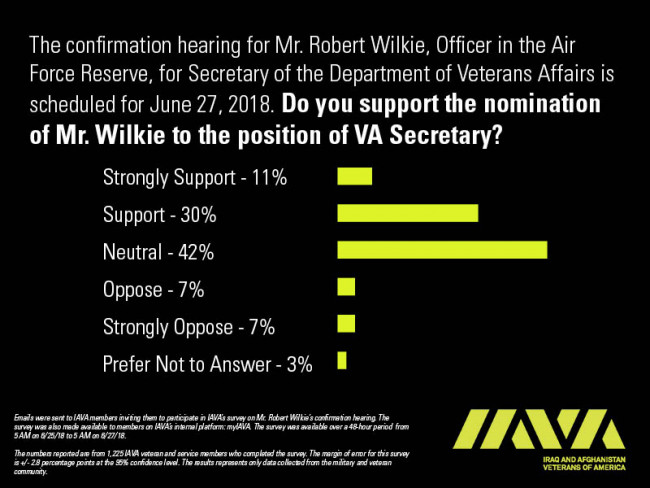 IAVA members have also been very vocal about what issues they care about most.

During fielding of the survey, the Washington Post reported on Mr. Wilkie’s controversial past work, leading some to call for increased scrutiny–while others defended Mr. Wilkie.

“IAVA members nationwide have spoken and are extremely focused on today’s hearing. We look forward to learning more about Mr. Wilkie’s vision for the second largest Department in the federal government. With a budget of more than $180 billion and over 300,000 staff, the welfare of millions veterans, and critical programs like the Post-9/11 GI Bill and veterans’ healthcare, this job is vital to America’s veterans and to our national security. IAVA members know how important this nomination is and they’re making their voices heard. Especially after the recent and dramatic withdrawal of Dr Ronny Jackson, we expect an extremely rigorous confirmation hearing and public vetting. For this critical leadership position at this turbulent time, American needs a steady hand who will always put veterans above politics. We have now been through seven VA Secretaries since the start of the war in Afghanistan, and after many months of drama and controversy, we deserve stability, transparency and integrity,” said Paul Rieckhoff, Founder and CEO of IAVA. “Like any other candidate, Mr. Wilkie will have to prove to millions of veterans nationwide that he is up to this mammoth, sacred leadership task. VA has never before been more vital–or more vulnerable. IAVA members have been clear about what we hope to see from the next leader of the VA. Most of all, we need a committed, focused, leader who will always put veterans above politics. We need a leader who will put veterans voices first, and they can start by focusing on IAVA’s Big 6 Advocacy Priorities, driven by extensive data from our members nationwide. We also look forward to seeing if Wilkie plans to expand privatization at VA, which vets nationwide and all leading VSOs continue to overwhelmingly oppose. And after news reports this week that many find troubling, Wilkie absolutely must prove he can be an advocate for all veterans. Especially for a community as diverse and rapidly-changing as ours.”

IAVA will continue to pressure all elected officials and leaders in Washington, including the acting VA Secretary, to work with leadership from both sides of the aisle to ensure VA is best equipped to care for all generations of veterans, including the 2.8 million Post-9/11 veterans. IAVA looks to the nominee to focus specifically today on the 2018 Big 6 Advocacy Priorities and all the urgent issues outlined in the IAVA Policy Agenda:

IAVA has invited our members nationwide to share their priorities and questions with Mr. Wilkie, with members of the Senate, and with the media. Thousands have responded and many are featured online at IAVA.org here.

IAVA’s Big 6 Advocacy Priorities
In 2018, IAVA’s focus is on 6 priorities that our members see as most pressing from among our comprehensive Policy Agenda. This “Big 6” contains the challenges and opportunities that IAVA members care about most–and see as areas where we can uniquely make an impact. IAVA is building on our core four policy priorities from 2017 to elevate and introduce to the nation two long-standing issues that are extremely important to our community – toxic exposure and cannabis. IAVA members are poised to educate the public, design solutions for positive impact, and lead the way to the future—just as we have since our founding in 2004. Each campaign will drive toward outcomes in 4 key areas: 1) Public Awareness 2) Executive Action 3) Legislative Change 4) Local Support.