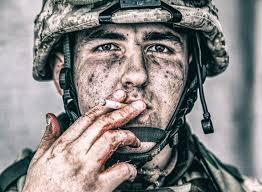 As a veteran advocacy organization, Iraq and Afghanistan Veterans of America (IAVA) focuses on non-partisan priority issues all Americans can support, like combating veteran suicide and access to post military education. These priorities are driven by veteran responses to IAVA’s annual member survey, the most recent of which highlighted the fact that tobacco use and addiction is an ongoing threat to the health of all generations of veterans.

According to the CDC, cigarettes remain the number one preventable killer in the United States, and veterans smoke cigarettes at significantly higher rates than the national average. The history between tobacco and the military is long and intertwined, and the ramifications of this toxic pairing still have an impact today. Despite knowledge of the negative health impacts, the military included packs of cigarettes in rations until as recently as 1975. The stress of combat is one that a civilian cannot understand, and, for better or worse, nicotine helps: it has proven to both raise alertness and increase calmness in the user. Given the high levels of stress service members face while deployed (often also accompanied by long periods of boredom and limited sleep), it is not surprising that their rate of use is higher.

IAVA’s recent poll on tobacco use shows that 99% of our members who smoked cigarettes began prior to their separation from the military, and that, while many have since quit, 34% still use tobacco products to this day. The national average is just 11%.

If the military helped turn our service members into smokers, then the government should also play a role in getting them off of tobacco — and there are ways we can. The Department of Veterans Affairs (VA) has been a strong leader in smoking cessation and smoke free initiatives. These efforts should be applauded. Unfortunately, current cessation programs are not enough. 50% of our tobacco-using members have tried these programs but were unsuccessful.

Of IAVA’s members who smoke, 67% believe that the VA should take a leadership role in exploring products that offer nicotine without combustion. There are products which have been scientifically reviewed by the United States Food and Drug Administration and these are a good place to start as they can potentially help the transition to going smoke-free. By avoiding the tar and other byproducts of traditional cigarettes, smoke-free alternatives to cigarettes provide harm reduction. This isn’t necessarily the long term solution, but it is one that can mitigate the health risks of a traditional nicotine addiction right now.

Smoking alternatives are certainly not risk free. Concerns over increased youth usage and last year’s rash of acute lung injuries associated with vaping serve as reminders that we must be vigilant and take into consideration the holistic impact of new technologies. But the technology should be explored thoroughly, if it can help. Veterans smoke cigarettes at a higher rate than their civilian counterparts so, as the largest integrated health care system in the country, it is the duty of the VA to at least explore the options for treatment and cessation, even if one of the options is a polarizing one.

The shortfall of attention and anti-smoking funding in the veteran non-profit landscape is due partially to the fact that the general population assumes that usage is victimless, as it is a choice made by adults. However systemic addiction is just not that simple. From IAVA’s member polling, we know that more than 60% of our smoking members who utilize e-cigarettes and other forms of vaping would return to traditional combustion cigarettes if vaping options were banned. That alone is a strong enough data point for us to have a discussion about non-combustion alternatives. It may not be a popular option, but it may be one in the immediate term that reduces harm to the veteran community.

Helping veterans quit smoking is the ultimate goal. We know that military service takes a toll on those who serve: IAVA’s most recent annual member survey found that, while 65% rated their health as excellent before joining the military, only 5% rated their current health as excellent. It is worth discussing real options that can improve that number and make quitting possible, something no veterans non-profit is currently doing. To begin tackling issues like this, we need corporations and the philanthropic community to invest in both immediate and long term strategic and impactful solutions; our consolidated care program, the Quick Reaction Force, is a good example. But more must be done. Starting the conversation is the first step in the battle against cigarette addiction, but only actual resources to support our veterans will allow us to win it.

This piece originally ran in The Well News publication on May 28, 2020.