WASHINGTON, DC (January 30, 2018) – Ahead of President Trump’s first State of the Union address, Iraq and Afghanistan Veterans of America (IAVA), the leading non-partisan Post-9/11 veterans empowerment organization, surveyed its 425,000 members nationwide. With over 1,000 respondents, the majority of IAVA members who responded plan to watch the State of the Union, and they believe it is important for the president to elevate veterans issues when he addresses the nation. The key veterans issues they want to see the president address are veteran suicide, VA reform, employment, education benefits and women veterans. 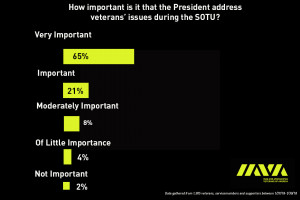 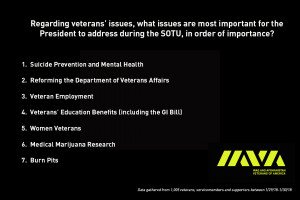 “Tonight, the majority of our members will be tuned in to the president’s speech to hear what he has to say about the state of our country. And they expect to hear veterans issues elevated on the national stage,” said Paul Rieckhoff, Founder and CEO of IAVA.“Our members around the globe want the president to address critical issues like mental health and suicide prevention, reforming the VA and veteran employment. As we have seen time and time again, veteran issues are American issues and are a matter of national security. Now is the time for renewed focus on the less than one percent of the country that has stepped serve in our most recent wars. Veterans aren’t political props; we’re deeply engaged citizens, and we will continue to hold the president and leaders in Washington accountable on their promises.”

For more information on IAVA’s detailed recommendations for the President, the administration, and Congress, see our Policy Agenda.

Methodology: Emails were sent to IAVA’s members inviting them to participate in IAVA’s short survey on the State of the Union. The survey was also distributed through IAVA’s social media channels. The survey was available from 1/29-1/30/18. Over 1,000 service members, veterans and supporters participated and completed the survey. The results represent only data collected from the military and veteran community.