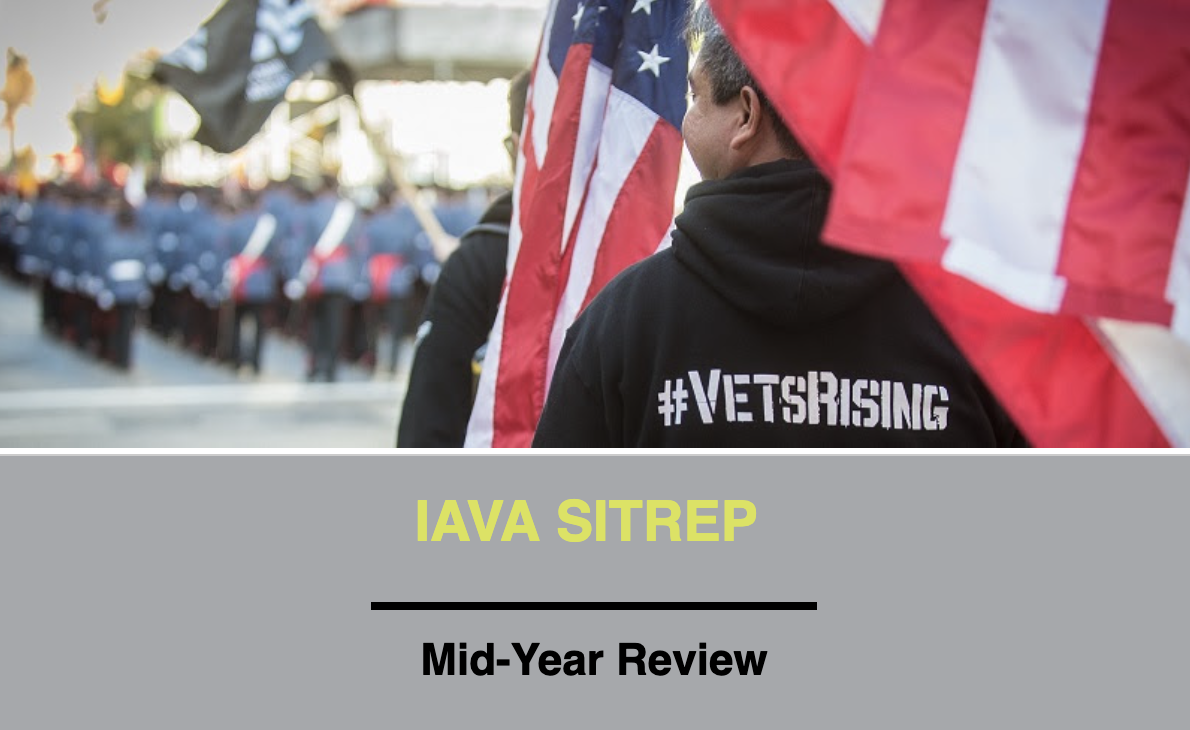 As the leading voice for the post-9/11 veteran community, IAVA continues to advocate on behalf of all veterans and create awareness about issues and topics impacting our community. Below are important articles and news sources from the first half of this year:

(IAVA Press Release) IAVA Condemns Senators Blocking the Honoring Our PACT Act: “This is unacceptable. Sick veterans are dying, and IAVA along with our VSO partners and advocates call on the Senate to fix this immediately. 41 US Senators failed veterans tonight, denying healthcare and benefits for those who deployed in wars around the world in America’s name for decades,” said Jeremy Butler, CEO of IAVA…Read more.

(IAVA Media) IAVA Joined MSNBC to Talk About the Urgency to Pass the Honoring Our PACT Act: “We are going to continue to stand fire watch here at the Capitol until Congress passes the PACT Act,” said Matt Zeller, Senior Advisor for IAVA…Watch here.

(IAVA Media) IAVA Joined Jon Stewart, VFW, and Others for a Press Conference on the Honoring Our PACT Act: “The PACT Act will not only take care of our current veterans suffering from toxic exposure but will establish a presumption which will leave a legacy for future generations of veterans,” said Tom Porter, EVP of Government Affairs for IAVA…Watch here.

(IAVA Testimony) IAVA Submitted Testimony to the Senate Committee on Veterans’ Affairs: “According to IAVA’s latest member survey, over 80% of IAVA members were exposed to burn pits during their deployments and a shocking 90% of those exposed believe they already have or may have symptoms,” wrote Travis Horr, Director of Government Affairs for IAVA…Read more.

(IAVA Press Release) IAVA Applauds U.S. Supreme Court Ruling on Veteran Employment Discrimination Case: “The decision today reaffirms important protections for those who have fought for us so that they will not be discriminated against due to their service. This is an important win for LeRoy Torres as well as servicemembers and veterans alike,” said Jeremy Butler, CEO of IAVA…Read more.

(IAVA Press Release) IAVA Celebrates Bipartisan Senate Passage of the Honoring Our PACT Act: “Over 80% of IAVA’s members were exposed to burn pits during their deployments. This bill keeps a promise to those veterans and the millions of others affected, that the country they fought for is there to fight for them too,” said Jeremy Butler, CEO of IAVA…Read more.

(IAVA Media) IAVA’s CEO and EVP of Government Affairs Delivered a Critical Update on the Honoring Our PACT Act: “The PACT Act still has a number of steps before it becomes law but we are working hard to ensure that veterans with illness from their toxic exposures get the healthcare and disability benefits they deserve,” said Tom Porter, EVP of Government Affairs for IAVA…Watch here.

(IAVA Press Release) IAVA Announces Launch of the 988 National Suicide Lifeline: “IAVA is proud to join with the Department of Veterans Affairs and our nation’s mental health community to advocate for and support this critical resource for American families,” said IAVA CEO Jeremy Butler…Read more.

(MSNBC) IAVA Joined MSNBC to Discuss our Afghan Allies and Advocates’ Efforts: Matt Zeller, Senior Advisor for IAVA, spoke with MSNBC’s Andrea Mitchell on the plight of our Afghan allies and the advocates dedicated to ensuring we keep our country’s promise and bring them to safety…Watch here.

(The Hill) Memorializing the Military Achievements of Women: “Past and current servicewomen have provided the same strength of character and commitment to the country as their male counterparts. Still, they have not received the same public awareness of their service — a known problem that needs to be addressed,” wrote Jeremy Butler, CEO of IAVA…Read more.

(U.S. Senate Committee on Veterans’ Affairs) Senate Unanimously Passes Tester, Boozman, Hirono, Collins Bill to Improve Veterans’ Access to Lifesaving Breast Cancer Screening & Care: “It can already be a struggle for women veterans to access high-quality breast cancer care even without a long commute. I was proud to testify in support of this bill in Committee and IAVA applauds Senate passage of the MAMMO for Veterans Act,” stated Iraq and Afghanistan Veterans of America Executive Vice President Tom Porter…Read More.

(Blavity) How Systemic Inequities Kept Many Black Veterans From Building Black Prosperity While Using the GI Bill: “The negative effects many Black veterans faced under the GI Bill may seem irreversible, but there is still an opportunity to rectify these inequities,” wrote Jeremy Butler, CEO of IAVA…Read more.

(IAVA Media) IAVA Partnered with 2U to Host a Live Panel on High-Quality Education Opportunities: “It is important that we help families navigate the post-military career world as well as upscaling and leveraging their GI Bill benefits,” said Kaitlynne Hetrick, Associate of Government Affairs for IAVA…Watch here.

(IAVA Media) IAVA, SPARTA, and MMAA Hosted Live Event on LGBTQ+ Non-Discrimination and Inclusivity: “We are grateful to collaborate with Sparta and MMAA to raise awareness and move the needle so that our fellow LGBTQ+ veterans and servicemembers can serve our country without discrimination and with equal treatment to their non-LGBTQ+ counterparts.” said Jeremy Butler, CEO of IAVA…Watch here.

LGBTQ+ Veterans: IAVA Announces Financial Support to Three LGBTQ+ Military and Veteran Service Organizations: “Since its inception, IAVA has been an advocate for the LGBTQ+ military and veteran community, and we are continually inspired by those who lead the fight for fairness and equality,” said Jeremy Butler, CEO of IAVA…Read more.

(IAVA Media) IAVA Joined Longtime Partner PhRMA to Discuss Veteran Healthcare: “This event is an essential continuation of the veteran healthcare conversation where we cover our community’s top health priorities and what we can collectively do to achieve them,” said Tom Porter, EVP of Government Affairs for IAVA…Watch here.

(IAVA Partnerships) IAVA and 2U Continue Connecting Veterans With High-Quality Educational Offerings: IAVA partnered with 2U to bring veterans high-quality education opportunities. This partnership amplifies IAVA’s commitment to empowering veterans and is designed to unlock trustworthy education offerings for our community…Learn more.

(IAVA Partnerships) IAVA Partners With No One Left Behind to Support the #FinishTheMission Campaign: “Campaigns like this are critical because they allow us to share and amplify the work our Afghan allies did for us. We will fight to ensure that our country keeps its promise to those who served us,” said Matt Zeller, Senior Advisor for IAVA…Learn more.