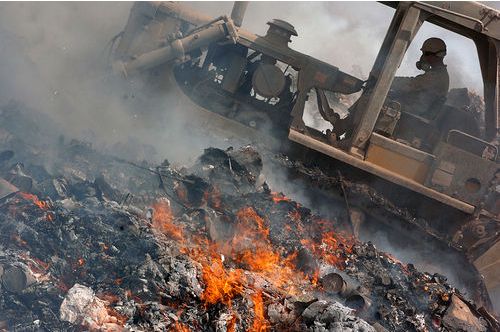 Before my deployment to Afghanistan in 2010, I was an avid long-distance runner. Sprinting through miles and miles of open spaces is when I felt grateful — grateful to be alive and to be healthy. Immediately after my return home, I began experiencing migraines, got winded climbing a flight of stairs, and couldn’t run without having to stop to breathe. Where did these ailments come from?

Burn pits. Giant piles of burning trash are used to get rid of waste in warzones. Service members used jet fuel to burn medical and human waste, chemicals, paint, and munitions, to name only a few of the many items set ablaze. These toxins are so dangerous that no corporation would ever dare introduce them within the United States for fear of economic and criminal repercussions.

Burn pits have been used extensively since 1990 for security purposes as they help leave as little footprint behind as possible. However, the poisonous fumes have affected around three and a half million American servicemembers, who continue to pay the price in visible and invisible ways.

Not all toxic exposure injuries are immediate, some do not manifest for years. Exposure to toxins from burn pits takes time to present and is one of the leading causes of long-term, chronic injuries. While the existing medical care system provides world-class care for veterans with visible wounds, it lacks the funding, authority, and readiness to address the invisible and often longer-term wounds facing our returning warfighters.

Currently, the VA has twelve toxic exposure presumptions an individual must present within ten years of separation from active service to be eligible for benefits — nine of which were only recently added to the list. Regrettably, many other dangerous illnesses caused by toxic exposures are not on that list.

Furthermore, if the veteran shows symptoms of other conditions, including some cancers, as little as five years after separating from active duty, the onus is on the veteran to prove causation. This leaves some veterans to cover the costs of the health care they need to survive out of their own pockets, causing many of them to fall into debt and file for bankruptcy.

Miscalculations, misinterpretations, and poor judgment by our leaders on both sides of the aisle set us on this path. While numerous, the highest cost levied upon our veterans is the long-term health impacts — that turn a healthy warfighter into a person who has difficulty climbing the stairs or lifting their child because they are short of breath. Others succumb to far more debilitating ailments, including cancer.

We did this to ourselves. We, in our haste for victory and security, excavated vast swaths of earth in which we placed our waste, lit it on fire, and knowingly exposed our cherished sons and daughters to inconceivably poisonous and carcinogenic fumes. It is an uncomfortable and inconvenient thought, but the harsh reality is that one of the gravest threats facing our veterans is wounds the government knowingly inflicted and willfully overlooked by disallowing care to the majority of those exposed.

Today, veterans with invisible injuries are walking through the doors of the VA, asking for health care and benefits. Eighty percent of those veterans are getting turned away and must seek care at their own expense. Congress has the responsibility to budget and authorize the funds to take care of the Americans they sent to war for two decades. Understandably, the cost implications of any legislation providing long-term care are extensive, but there is a difference between being fiscally conservative and fiscally responsible.

The U.S. had 20 years of war to budget for the care of veterans who would eventually become ill from toxic exposure. Instead, we are just now getting to it, and unfortunately, some veterans have already died. We are only asking for what is owed to us; the care and services needed to address injuries we sustained while in service — those visible and invisible.

For years, the major focus of the veteran and military community, including the Iraq and Afghanistan Veterans of America (IAVA), has been the development and passage of the bipartisan Honoring Our PACT Act. This comprehensive legislation aims to ensure that our service members who were victims of toxic exposure, are cared for now and in the future.

Thankfully, some congressional leaders are trying to make a difference and ensure those who have been and will be exposed to toxic burn pits have access to the care to which they are entitled. After passing the House in March, the PACT Act is headed to the Senate floor on May 26, and will be voted on very soon.

The bill will not only take care of our current veterans suffering from toxic exposure but will establish a legacy for future generations of veterans. If our government fails our veterans now, potential future service members may not choose to sign a blank check to their government, knowing they may not be cared for when they return home with injuries.

This is when we decide what kind of legacy we want to leave behind and reflect on whether we truly mean it when we profess our support for our military. How many more must die before we do what is right and pass the Honoring Our PACT Act? Congress must take action now. In the midst of our divisive political environment, our country needs a bipartisan win that supports those who sacrificed for us, to support America’s heroes.

US Air Force Veteran Jen Burch deployed to Afghanistan from 2010 to 2011 and now serves as Communications and Government Associate for Iraq and Afghanistan Veterans of America.

This piece was originally published by THE HILL on May 24, 2022.