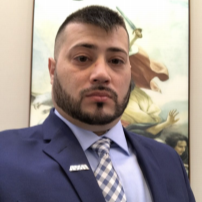 Background: Daniel served 4 years in the Marine Corps infantry from 2005 to 2009.  He deployed twice with 2nd Battalion 7th Marines, in both Iraq and Afghanistan.  He is a Purple Heart recipient and the father of two boys.  Daniel is a volunteer with several veteran organizations in his community of Flint.  Daniel now works as a peer support counselor with the Veterans Treatment Court.  The issue of Suicide is close to him after serving alongside Clay Hunt, the namesake of a bill passed with the support of IAVA in the past.  Since his deployments, his unit has continued to lose Marines to suicide after suicide.  Daniel worked through his own challenges since coming home but he now hopes to help those that are still suffering.  Daniel wants to be representative of the voices of his fellow vets and to help right the wrongs and help guide the ideas of how best to train, educate, treat, and care for all American Veterans.