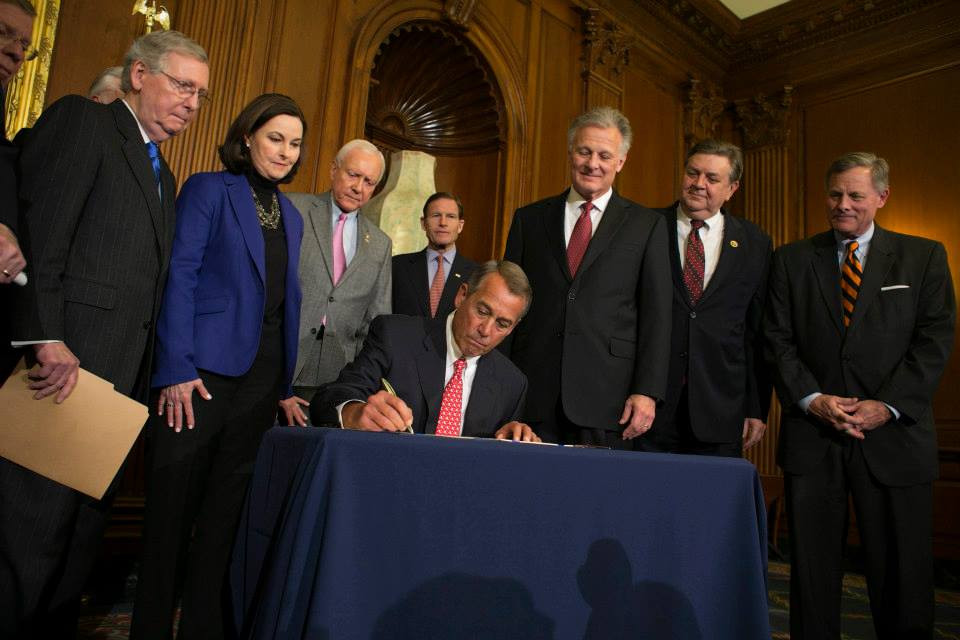 Washington D.C. (February 10, 2015) – This evening House Speaker John Boehner (R-Ohio) signed the Clay Hunt Suicide Prevention for American Veterans (SAV) Act certifying its passage during an enrollment ceremony. The Speaker was joined by Susan and Richard Selke, parents of Clay Hunt, Paul Rieckhoff, IAVA CEO and Founder, and IAVA member veterans who were present for the ceremony. The Clay Hunt SAV Act, which passed the House in January and the Senate unanimously last week, will combat veteran suicide and improve access to mental health care. The legislation is named after Marine sniper Clay Hunt from Texas, who died by suicide in 2011. Iraq and Afghanistan Veterans of America (IAVA) commends Congress for standing with our veterans and passing the bipartisan bill.

The bill now goes to President Obama, who will sign it into law on Thursday, February 12, 2015. Click here to visit a timeline of IAVA’s work on combating suicide.

“We are so thankful for Speaker Boehner holding this ceremony today, and for the members of Congress who helped pass this bill so quickly at the beginning of this session. Last year, Richard and I began this journey to make sure not another veteran faces the obstacles Clay did when accessing mental health care,” said Susan Selke, mother of Clay Hunt. “While this bill is not a remedy to a complicated issue, it does help address gaps in accessing mental health care. Had legislation like this existed years ago I believe Clay would be here with us today. We are fortunate to see our country is now one step closer to reversing this terrible suicide rate.”

“This is a historic day for IAVA members and veterans nationwide. After a year of hard work urging Washington to focus its attention on veteran suicide, we have finally come full circle,” said IAVA CEO and Founder Paul Rieckhoff. “We thank Speaker Boehner and Congress for passing this bill and making sure our veterans get the mental health care they so desperately need. We also thank Senators McCain and Blumenthal for leading on this issue and reintroducing the bill as their first agenda items this year. IAVA also applauds Rep. Tim Walz for introducing the House version and Chairman Jeff Miller for his stewardship. Their leadership and commitment to veterans have been vital in this fight. Next, our veterans look forward to seeing the bill signed into law at Thursday’s signing ceremony at the White House. The brave men and women who served our country will now begin to receive the access to the quality mental health care they were promised and rightfully deserve.”

Developed by IAVA and its allies on Capitol Hill, and driven by quantitative and qualitative data from IAVA’s annual member survey, the Clay Hunt SAV Act will:

Increase Access to Mental Health Care and Capacity at VA to Meet Demand
· Requires the VA to create a one-stop, interactive website to serve as a centralized source of information regarding all VA mental health services for veterans.
· Addresses the shortage of mental health care professionals by authorizing the VA to conduct a student loan repayment pilot program aimed at recruiting and retaining psychiatrists.
· Extends Combat-Eligibility for mental health care services at VA for one-year, providing for increased access for veterans that may be suffering from conditions such as Post Traumatic Stress Disorder (PTSD).

Improve the Quality of Care and Boosting Accountability at VA
· Requires evaluations of all mental health care and suicide prevention practices and programs at the VA to find out what’s working and what’s not working and make recommendations to improve care.