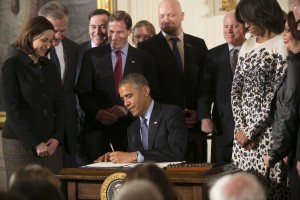 Washington D.C. (February 12, 2015) – This afternoon President Obama signed the Clay Hunt Suicide Prevention for American Veterans (SAV) Act into law at a public signing ceremony inside the White House. Susan and Richard Selke, parents of Clay Hunt, and Paul Rieckhoff, IAVA CEO and Founder, joined the President on-stage. IAVA members from across the country were also present. The Clay Hunt SAV Act, which passed the House in January and the Senate unanimously last week, will combat veteran suicide and improve access to mental health care. The legislation is named after Marine sniper Clay Hunt from Texas, who died by suicide in 2011. Iraq and Afghanistan Veterans of America (IAVA) commends the President for standing with our veterans and passing the bipartisan bill.

“Richard and I are humbled and thankful to have met with the President today and witness him signing this legislation into law,” said Susan Selke, mother of Clay Hunt. “It is encouraging to know that this law, among other things, will enable the VA to evaluate all of its current suicide and mental health programs and attract and hire more doctors and mental health care professionals to serve our veterans’ needs. Had legislation like this existed years ago I believe Clay would be here with us today.”

“This is a momentous day for veterans and their families. IAVA is proud to have led this fight with Susan and Richard Selke to ensure every veteran gets access to quality mental health care,” said IAVA CEO and Founder Paul Rieckhoff. “We thank President Obama for signing this bill to combat suicide and help curb the veteran suicide rate. We can’t afford to lose any more veterans to suicide — these brave men and women are leaders, mentors, friends and family members. The Clay Hunt SAV Act will increase capacity and access to mental health care at VA to meet demands, improve the quality of care, boost accountability at VA, and develop a community support system for veterans. This legislation will also get more mental health professionals into VA so they can start helping veterans like Clay with their invisible injuries. This bill will not stop every suicide but it will definitely help save lives. And it’s important for all Americans to understand that today is not the end of our fight against suicide, it’s just the beginning. We hope this day and Clay’s legacy will inspire all Americans to join our fight and work even harder in the years ahead.”

Rieckhoff added: “We also thank the more than 20 veteran service organizations and partners who helped support this critical legislation. IAVA praises Senators McCain and Blumenthal for leading on this issue and reintroducing the bill as their first agenda items this year. IAVA also applauds Rep. Tim Walz for introducing the House version and Chairman Jeff Miller for his stewardship. Their leadership and commitment to veterans have been vital in this fight.”

Click here to visit a timeline of IAVA’s work on combating suicide. For an updated list of sponsors for the Clay Hunt SAV Act click here.

Developed by IAVA and its allies on Capitol Hill, and driven by quantitative and qualitative data from IAVA’s annual member survey, the Clay Hunt SAV Act will:

Increase Access to Mental Health Care and Capacity at VA to Meet Demand
· Requires the VA to create a one-stop, interactive website to serve as a centralized source of information regarding all VA mental health services for veterans.
· Addresses the shortage of mental health care professionals by authorizing the VA to conduct a student loan repayment pilot program aimed at recruiting and retaining psychiatrists.
· Extends Combat-Eligibility for mental health care services at VA for one-year, providing for increased access for veterans that may be suffering from conditions such as Post Traumatic Stress Disorder (PTSD).

Improve the Quality of Care and Boosting Accountability at VA
· Requires evaluations of all mental health care and suicide prevention practices and programs at the VA to find out what’s working and what’s not working and make recommendations to improve care.

In March of 2014, IAVA launched a yearlong effort to elevate conversation about the veteran suicide crisis. Over the course of the year, united with its partners Tragedy Assistance Program For Survivors, American Psychiatric Association, Brigade, Causes.com, Pivot TV, Change.org, Linkin Park, Cale Conley, Mayhem Music Tour and thought leaders from across the country, IAVA was able to galvanize attention and support for the Clay Hunt SAV Act.