New York, NY – January 28, 2019 – After founding IAVA in his tiny studio apartment in New York City 14 years ago, IAVA Founder and CEO Paul Rieckhoff is stepping down next month as the leader of the renowned veterans advocacy group. Rieckhoff will transition to focus on new creative endeavors, including his second book, launching his first podcast and leading other to-be-announced media projects. Rieckhoff will continue to serve on the IAVA Board of Directors. 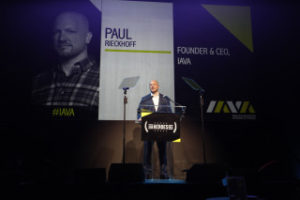 “Outside of building my family, founding and leading IAVA has been the greatest honor of my life. And all our groundbreaking work has always truly been a team effort. I’m humbled and grateful to have served alongside so many inspiring colleagues, partners and IAVA members to create and grow a new model for impact. Together, we have defined the national dialogue for a new generation of veterans, changed countless lives and positively impacted history forever. From the passage of the new Post-9/11 GI Bill, to the repeal of “Don’t Ask Don’t Tell,” to the Clay Hunt Suicide Prevention for American Veterans Act, to the creation of the Rapid Response Referral Program, to the IAVA/NBC Commander-in-Chief-Forum, to serving as the watchdog on countless issues like the recent shutdown, we have always had the back of veterans and led the way for a new generation. We jump-started a national movement, empowered a “New Greatest Generation” of leaders and showed the world that veterans are not a charity, we’re an investment. I’ll always be IAVA member #1 and forever grateful for the opportunity to serve this community. After 14 incredible (and exhausting) years, it’s time for me to embark on new challenges. Most exciting of all, the arrival of our second son next month.”

“It’s now time for a new leader to take IAVA to the next level in it’s journey, and Jeremy Butler is that leader. Jeremy is dynamic, tireless, honorable and dedicated. I’ve never seen anyone work harder for his fellow veterans and servicemembers than Jeremy. He is a true patriot and tenacious advocate, who always leads from the front and inspires others. From his continued service in the Navy, to working by my side for the last three years, Jeremy has always put our mission and our people first. Our veteran community could have no finer a person powering IAVA’s charge into the future than Jeremy Butler.”

After a deliberate search, the IAVA Board of Directors voted unanimously to select Butler to lead the renowned non-profit veterans empowerment organization into the future.  He is uniquely qualified to lead IAVA through its next chapter and fight on behalf of all veterans. 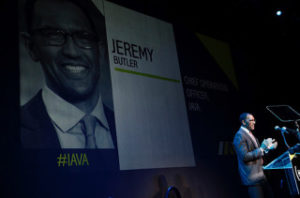 Jeremy Butler joined IAVA in 2015 with over 15 years of experience providing substantive and strategic counsel to leaders in high-profile government and private sector offices, including the Departments of Defense and Homeland Security. Originally from Glenarm, Illinois, Butler is a graduate of Knox College and the U.S. Naval War College where he received a Master of Arts in National Security and Strategic Studies. He continues to serve our country as a Surface Warfare Officer in the Navy Reserve and previously served as IAVA’s Chief Operations Officer, Acting Chief Development Officer and Senior Military Fellow.

For the last year, Butler has led all IAVA internal operations nationwide. Prior to that, his extensive experience at IAVA spanned all aspects of the organization’s work, including leadership roles in communications, finance and development. Butler is a well-known and respected voice in the veteran and military community and has regularly served as an IAVA spokesperson at events and in the media. He has contributed to Fox News, C-SPAN, Sirius XM, NY1 and numerous veteran and military media outlets.

“It is truly an honor to be given this opportunity to serve”, said Butler. “Since Paul founded the organization over 14 years ago, IAVA has done more to support America’s veterans than most will ever know. It is both humbling and exciting to step in to this new role. I am incredibly thankful to be able to work with the IAVA Board of Directors, staff and members to ensure that we continue to connect, unite and empower post-9/11 veterans everywhere.”

Butler’s leadership is complimented by an incredibly talented, deep and effective senior leadership team, staff and Board of Directors that have guided IAVA to great heights over the past few years.

IAVA Chairman of the Board of Directors and Iraq veteran, Scott Feldmayer added, “The IAVA Board, staff and members worldwide salute Paul on an incredible tenure. His vision for change became a catalyst for this generation of veterans and their families. For more than a decade, Paul led IAVA’s enormous growth and built IAVA into the sustainable, leading organization it is today. We wish him and his growing family all the best in the next phase of what is sure to be a lifetime of service and innovation.”

Rieckhoff  is an Ashoka Fellow and a member of the Council on Foreign Relations, and he is the recipient of numerous awards and honors, including: GQ’s “50 Most Powerful People in D.C.”, Esquire magazine’s  “America’s Best and Brightest,” Rolling Stone’s “The Quiet Ones: 12 Leaders Who Get Things Done”, Penthouse Magazine’s Annual “Badass List”, The Hill’s “Top Lobbyists: Grassroots” for 2014, 2015, 2016 and 2017, and Task & Purpose’s “Mighty 25 Veterans Poised to Make a Difference.”

In 2014, Rieckhoff was selected for a “Teddy Award” by TIME Magazine for his political courage in demanding VA reform throughout years of scandal. Political guru Joe Klein wrote: “Paul Rieckhoff of Iraq and Afghanistan Veterans of America has been an edgy, controversial figure in recent years, a creative critic of the Department of Veterans Affairs. The revelation of widespread corruption and incompetence in the VA, and the dismissal of Secretary Eric Shinseki, proved the value of Rieckhoff’s persistence. His willingness to take flak for his brothers and sisters in arms merits a Teddy.”

Rachel Maddow did an unprompted tribute to Rieckhoff and his work at IAVA upon hearing that he was leaving, which can be seen here:

“Paul is leaving IAVA in excellent hands.” Feldmayer added, “Jeremy Butler is one of the finest rising leaders of our time. He embodies the best of what America, the military, and the IAVA movement is all about. The IAVA Board of Directors, staff and members nationwide are honored to stand with Jeremy in serving veterans and we are excited for an incredible future for IAVA and the veterans community worldwide.”

“Iraq and Afghanistan Veterans of America is vital to our nation’s veterans-and to all Americans.” added The Honorable Robert A. McDonald, 8th Secretary of the Department of Veteran Affairs, Retired Chairman, President, and CEO of The Procter & Gamble Company. “As V.A. Secretary, I saw first-hand the powerful impact of IAVA. Paul built an innovative organization that is leading the way for a new generation and I salute his many years of leadership and dedication. Jeremy is a Navy veteran and a strong leader who I know is ready to continue the important work for IAVA. I look forward to continuing to support him and all IAVA’s important work for many years to come.”

Jeremy Butler is available for interviews, will share his vision for IAVA’s future in a Facebook live event on February 1, and will lead IAVA’s “Camouflage Wave Welcome Reception” in Washington this Wednesday, January 30. Butler will also present IAVA’s 2019 Policy Agenda before a joint session of Congress in March, the lead element of IAVA’s quarterly ” Storm The Hill” advocacy activation. Rieckhoff, Feldmayer and others are available as well.