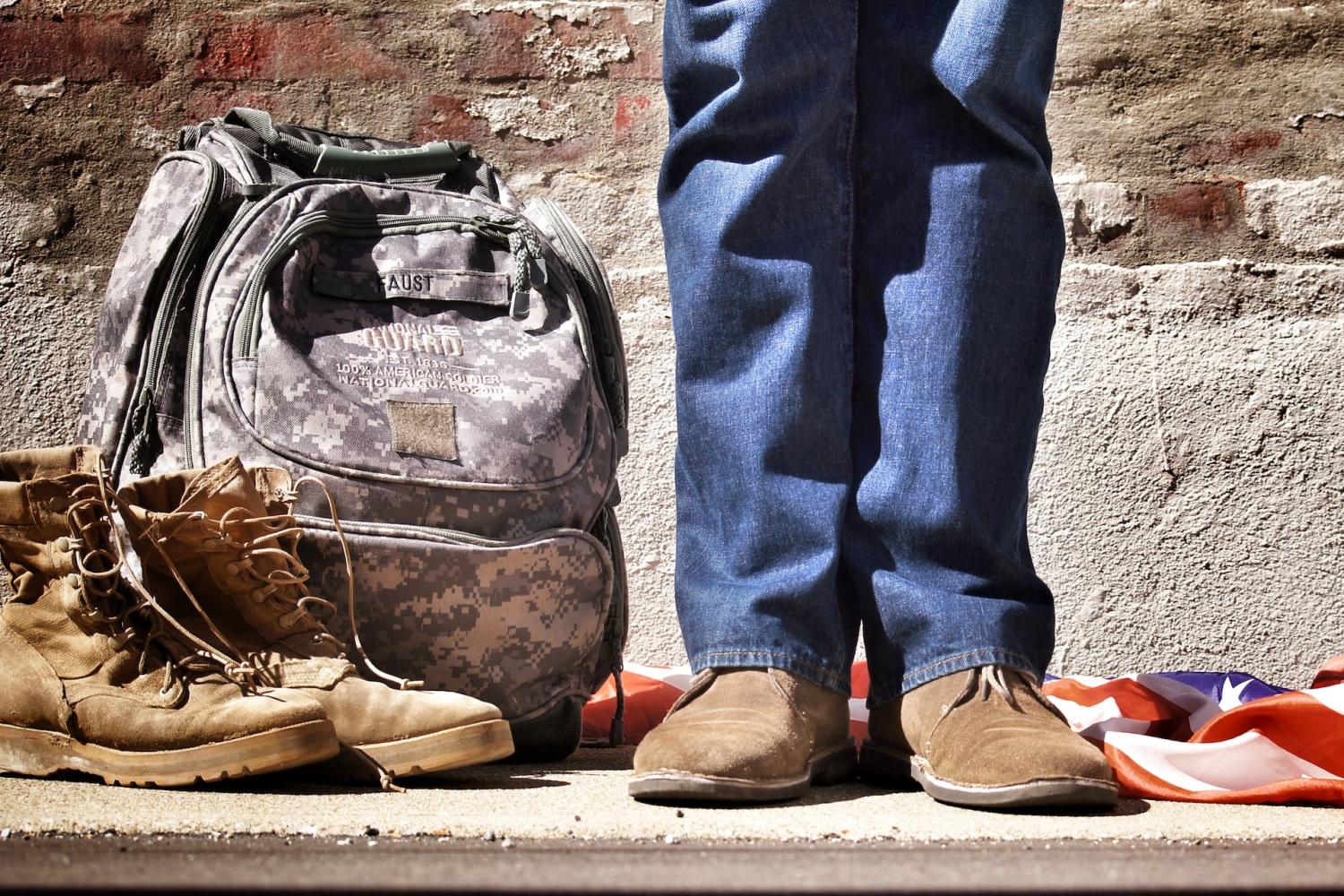 Much like many other signs I’ve seen, this one outside the New York city subway says “Homeless Veteran. Please Help.” It pains me to see yet another fellow veteran who has fallen through the cracks of an extremely broken system – who hasn’t been afforded the same protection they’ve provided for their country by risking their lives every single day.

On any given night, an estimated 40,000 veterans go without shelter in the United States. Additionally, about 1.5 million veterans are considered at-risk of homelessness. According to Iraq and Afghanistan Veterans of America’s (IAVA) most recent member survey, 23 percent of respondents didn’t have a permanent place to live when they transitioned out of the military, out of which 77 percent reported couchsurfing temporarily.

These statistics reflect the frightening and challenging reality of the veteran housing crisis, which has been exacerbated by the COVID-19 pandemic. Due to the nature of veterans’ service, this community faces unique challenges during their transition back to civilian life, which perpetuates a military-to-housing insecurity pipeline.

In order to break this pattern, we must combat all the leading contributors of homelessness – unemployment, lack of affordable housing, substance abuse, mental health challenges, and many more – through a holistic approach that employs a clear understanding of their interconnectedness.

One of the most obvious shifts that veterans face post-service is a change in employment. While veterans spend years in the military upgrading their skills in particular fields, these skills are not always transferable to the civilian labor force. This is a significant impediment to veterans during their transitional period.

What’s more, veterans are often subject to increased scrutiny from employers. The reluctance of employers to hire those with the possibility of deployment (for individuals continuing their service in the Guard and Reserves) as well as veterans with disabilities – despite legal requirements against such discrimination – affects employment opportunities. Further, they may not have the qualifications, such as a diploma or certificate, which are often required to obtain a position. This has resulted in a combined under-employment and unemployment rate of 61 percent for transitioning service members and veterans.

These veteran-specific barriers to full employment have a direct impact on housing insecurity. The inability to secure employment results in the lack of a reliable source of income, which hinders veterans’ capacity to apply and pay for housing.

Only 36 affordable and available rental homes exist for every 100 extremely low-income renters – creating an overall shortage of 7 million affordable rental homes nationwide. Uncertain income in addition to lack of affordable housing creates a vicious cycle of housing insecurity. Moreover, 2017 census data showed that more than 660,000 veterans living in low-income households still spent more than 50 percent of their income on housing. Veterans in this situation are at a higher risk of being evicted or experiencing homelessness, with countless individuals forced to make impossible decisions on whether to pay for housing or other necessities like food.

While many short and long term housing instability solutions and prevention services have been implemented, they are often underutilized and often unequipped to address the complex needs of veterans who have experienced homelessness for long periods of time.

As previously mentioned, injuries among returning service members can lead to housing insecurity if they do not have adequate support networks. Overall, 53 percent of individual veterans suffering from homelessness have disabilities, compared to 41 percent of non-veteran individuals without shelter. Additionally, medical bills due to these injuries can begin a chain reaction that eventually leads to homelessness.

Fifty percent of veterans experiencing homelessness suffer from serious mental illnesses. Mental health challenges often exacerbate veterans’ isolation from communities despite the need for community support to navigate living with a disability and accessing care, which can compound the housing insecurity cycle.

Physical disabilities and mental illness often go hand-in-hand with substance use disorder (SUD). For example, veterans who have been prescribed opioids for pain management as a result of a service-related injury are at risk of abuse and, in turn, addiction. Additionally, 37 to 50 percent of veterans who served in Afghanistan and Iraq were diagnosed with a mental health issue associated with SUDs and 63 percent of those diagnosed with SUDs also met the criteria for PTSD. Veterans who are dealing with SUD or who have been incarcerated as a result of substance abuse issues are often unable to participate in housing programs.

Where do we go from here?

One such solution that addresses the intersectionality of housing issues is the Building Solutions for Veterans Experiencing Homelessness Act of 2021. This bill would strengthen programs emphasizing permanent solutions to housing instability and homelessness experienced by veterans across the country and preserve expiring COVID-19 related housing programs.

Among the many critical solutions in this bill, this legislation would provide greater accommodations for veterans experiencing homelessness by permanently removing barriers on funding for construction of transitional housing, expanding public transportation for veterans to access physical and mental healthcare and delivering appropriate medical care for aging veterans while they await long-term care placement, and increase and make permanent funding connecting veterans with long-term jobs.

Current programs from veteran service organizations (VSOs), such as IAVA’s Quick Reaction Force (QRF) which helps veterans navigate housing programs based on their needs and preventing evictions – would also be enhanced by this legislation.

The problem of homelessness is perceived by some as a personal moral failure, not a systemic problem that has led us to abandon the most vulnerable in our society. It takes concrete actionable solutions from society, as a whole, to end homelessness. By expeditiously passing the Building Solutions for Veterans Experiencing Homelessness Act, our policymakers can make historic gains in eliminating the veteran housing crisis.

Jeremy Butler is the Chief Executive Officer for Iraq and Afghanistan Veterans of America. Jeremy joined IAVA in 2015 and took over as CEO in 2019. Jeremy served in the Navy from 1999 – 2005 as a Surface Warfare Officer. He transitioned to the Reserves and has remained there since.

This piece was originally published by TriplePundit on November 11, 2022.