IAVA’s members have identified 6 priority issues that matter most to them.

IAVA is committed to ending the veteran suicide epidemic.

Burn pits are the Agent Orange of our generation. Our members see burn pits as a critical, urgent and growing threat.

We must ensure that our veterans receive the best possible care.

IAVA is fighting to fully recognize and to improve services for women veterans.

What is the issue?

How can I help?

I am a woman veteran

Up to Speed: Women Veterans

WHY IS IAVA FOCUSED ON WOMEN VETERANS?

Over 345,000 women have deployed since 9/11. While the number of male veterans is expected to decline in the next decades, the population of women veterans will increase. Women continue to take on new roles and responsibilities throughout the services. Yet, their service and sacrifice is often overlooked. In 2017, IAVA launched our groundbreaking campaign, #SheWhoBorneTheBattle, focused on recognizing the service of women veterans and closing gaps in care provided to them by the VA. While many other organizations waited or chose other issues, we made the bold choice to lead on an issue that was important to not just the 20% of our members that are women, but to our entire membership, the future of healthcare and America’s national security.

HOW ARE WOMEN VETERANS IMPACTED?

Not only do women veterans encounter barriers to care and benefits, they do so in a culture that often does not accept them or fully recognize them as veterans. The time to act is now. We must improve access to care and benefits while changing the underlying culture to one inclusive of women. This glaring problem is best exemplified in the gendered and very outdated motto that greets every person, male and female, who walks into the VA: “To care for him who shall have borne the battle and for his widow, and his orphan.”

HOW WIDESPREAD IS THE PROBLEM?

The number of women in both the military and veteran communities has been growing steadily since the 1970s. While more women are joining the military and are finally given unprecedented roles in combat and greater responsibilities in leadership, veteran services and benefits often lag behind.

83% of IAVA members believe it is important for IAVA to focus on the issues impacting women veterans while only 27% feel that the general public understands the contributions of women in the military. 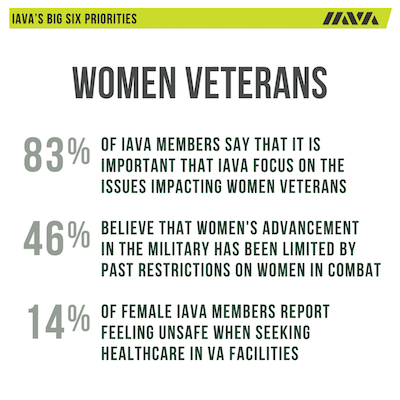 This is appalling, how can I help?

Donate to support our work

Learn about our supported legislation to ensure veterans are cared for and take action.

How is IAVA fighting?

IAVA is working hard with leaders to ensure that the women who fought for our country receive the care they need and earned at the VA; learn about our current leg below and take action.

The Honoring Our Veterans Act

Women often encounter a culture that does not accept them or fully recognize them as veterans. This glaring problem is best exemplified in the outdated motto that greets every person, male and female, who walks into the VA: “To care for him who shall have borne the battle and for his widow, and his orphan.” The Honoring Our Veterans Act (H.R. 2806/S.1313) would change the motto to read: “To fulfill President Lincoln’s promise to care for those ‘who shall have borne the battle’ and for their families, caregivers, and survivors.”

We fight and win for veterans every day, but we can’t do it without you. Commit to supporting veterans and we’ll keep you updated about our important work and let you know how you can help.

Are you a woman veteran?

Women veterans are 1.8 times more likely than civilian women to commit suicide. Among women who do not use VA services, we have seen a 98 percent increase in suicide rates.

QRF IS HERE FOR YOU

MORE ABOUT RECOGNIZING AND IMPROVING SERVICES FOR WOMEN VETERANS

While the past few years have been encouraging in the display of growing interest in ensuring health care accessibility for women veterans at VA, increasing support for women veterans, and expanding services, there is still much work to do. Women still report being stigmatized or feeling unwelcome at VA, and the Departmental motto itself is gender-exclusive. As a nation we must recognize GI Jane as much as GI Joe; it’s past time that the military culture and our nation embrace this, and recognize, celebrate, and support the service of all veterans that serve this nation.

We need to take the American people to a place where women vets are envisioned just as readily as men. Congress must act to not only bring equality to VA health care for women, but also resource-sensible services like childcare. “Access to Quality Care for Our Veterans” should be gender blind, which in the case of supporting single parents, can impact men just as much as women.

Beth Riesgraf, star of Paramount Network’s hit series 68 Whiskey, partnered with IAVA to shine a light on the unique issues women face during active duty service and when they transition back to civilian life. The goal of the film is to build meaningful support for The Deborah Sampson Act. Watch her film HERE.

Civilians and veterans should have the same standard of care. Our veterans must have the same right to pursue alternative therapies while under VA care.

The Post-9/11 GI Bill has now sent more than one million veterans and dependents to school. We must ensure veterans and their dependents have access to education benefits.

Select a topic from the list below to learn about IAVA’s advocacy priorities.