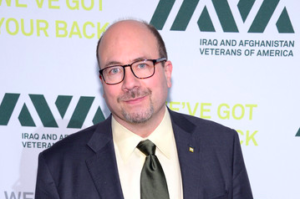 Newmark’s unrestricted, transformational gift is one of the largest IAVA has ever received. This investment will create a long-lasting impact on the organization’s mission, operations and community, and it will power innovative non-partisan advocacy work, groundbreaking veterans research, and dynamic direct-support programs, which serve millions of veterans nationwide. It will also ensure IAVA remains at the forefront of using technology, social media and data to empower the veteran community.

Before sharing the news of this incredible donation, which comes just three days before Veterans Day, Newmark accepted the 2018 IAVA Civilian Leadership Award, which was presented by IAVA veterans and special guest Stephen Colbert. To amplify the impact of his gift, Newmark, a longtime supporter of veterans and military families, challenged other Americans to donate and help IAVA reach their target of raising $20 million by the end of Veterans Month (November 30).

“IAVA is vital to the future of our veterans – and the future of all Americans,” said Newmark. “I’ve been proud to serve on their Board for the last ten years, and I’m humbled to contribute to their mission-critical work of advocating on behalf of and providing personalized support to post-9/11 vets. IAVA is helping veterans participate equally in the opportunities they have fought to protect, and I hope my gift will help them do more of what they do best.”

Newmark continued: “After a polarizing election, this Veterans Day is especially important. As a country, we need a reminder that veterans and military families deserve recognition for their service year-round. I ask those who’ve done well in this country to support IAVA and help them raise $20 million this November.”

“Tonight, America’s heroes have a hero,” said Paul Rieckhoff , IAVA Founder and CEO. “With this donation, Craig Newmark has positively changed history for veterans everywhere and invested in the future of our entire post-9/11 veterans community. His generosity will ensure IAVA remains a powerful voice, strong watchdog and vital safety net for millions of veterans and their families for years to come.”

Rieckhoff continued: “Craig embodies the IAVA mission and all that is great about American ingenuity, generosity and service to country. He is a true patriot, an inspirational voice and a role model for people worldwide. We are truly grateful for his support and leadership, and we hope everyone in America will follow him in joining our mission.”

This expanded investment of Newmark in America’s veterans follows a year of historic gifts to promote trustworthy journalism. Donations in that area included $20 million to the now-named Craig Newmark Graduate School of Journalism at CUNY, $20 million to the tech-focused journalism startup The Markup, and generous gifts to New York Public Radio, THE CITY and others. Newmark views his increased support for veterans and military families as a strategic component of his groundbreaking multi-pillar focus on helping to protect American democracy – alongside trustworthy journalism, voter protection and women in technology.

About IAVA
Iraq and Afghanistan Veterans of America (IAVA) is the premier veterans advocacy and support organization on the planet. Every day, we fight for veterans. Hard. We are the tip-of-the spear non-profit engine of impact that connects, unites and empowers over 400,000 veterans and allies nationwide. Founded by Iraq veteran Paul Rieckhoff in 2004, IAVA is the non-partisan leader in advocacy, public awareness and 1-on-1 case-management support. We organize locally and drive historic impacts nationally.

IAVA is vanguard of the veterans movement and the most powerful network of veterans on the planet. We have connected more than 1.2 million veterans with resources and community, and provided thousands of veterans of all generations with life-saving and life-changing personalized support from IAVA’s Master’s-level social workers. We partner with all those who share our commitment to this generation of veterans — whether they’re Democrat, Republican, or independent. We’ve led in the passage of the Post-9/11 GI Bill, the Clay Hunt Suicide Prevention for America’s Veterans Act, the VOW to Hire Heroes Act and numerous other pieces of game-changing policy and legislative change. We’ve worked closely with the White House, Members of Congress, the Department of Defense (DoD), the VA, corporations, and other nonprofits to create powerful networks for impact. We’re a tough watchdog as well, holding political and media leaders accountable for failures to support our community.

This year, we’ve listened to our members nationwide and prioritized what they want action on the most: our Big 6 Advocacy Priorities. These include: 1) combating suicide, 2) recognizing and supporting women vets, 3) defending the GI Bill, 4) reforming VA, 5) driving support and recognition of burn pit exposure and 6) empowering wounded veterans to utilize medical cannabis. Our broader, comprehensive Policy Agenda includes a focus on homelessness, veteran employment, equality, service dogs, a national memorial for our generation and much more.

All our work is powered by IAVA’s incredible national membership and by our innovative Research Department, that uses real data to drive the development of scalable solutions to benefit veterans and their families. Through careful analysis of IAVA’s powerful annual member survey and continuous surveillance of data about service members, veterans and their families, IAVA’s Research Department informs the development of IAVA advocacy campaigns and programs and promotes accurate representations of veterans in the public discussion on the most important issues of our time. We believe veterans are not a charity, we’re an investment. We know veterans are powerful source of hope, unite and impact. We are not damaged or broken. We are the future. We are #VetsRising. And we invite you to invest in our future, empower America’s next greatest generation of leaders and join our movement today.