IAVA Members and supporters have sent over 33,000 messages to Capitol Hill to #DefendTheGIBill. Join us now and TAKE ACTION.

Congress is breaking its sacred promise to our veterans as some look at the Post-9/11 GI Bill as a piggy bank to fund other programs. IAVA has pledged to all veterans that we will fight this effort—and we’ve made good on that promise. Congress originally planned to complete their raid on the Post-9/11 GI Bill by Memorial Day. They failed. Then they moved their goal post to July 4th. They failed. Then before it left for its summer and fall recesses. Again, they failed. Each time IAVA’s relentless advocacy stood in their way.

This fight is far from over though. The end of the year is fast approaching and there are very few days left in the 114th Congress. Given that the legislation that includes the GI Bill cuts are a top priority this year for Veterans Committee leaders, we fully expect an all-out push to ram these cuts through in the final days of this Congress.

For months Iraq and Afghanistan Veterans of America (IAVA) opposed the so-called “Veterans First Act.” This legislation includes $3.4 billion in cuts over the next five years to the Post-9/11 GI Bill, robbing veterans and their families of benefits that they were promised. The Senate developments follow the passage of a similar House legislative package, which includes a 50 percent cut to the housing allowance provided to children who will have their parent’s Post-9/11 GI Bill benefits transferred to them.

During the course of IAVA’s #DefendTheGIBill campaign, IAVA members have sent over 33,000 letters to Capitol Hill and we’ve held over 250 meetings with Members of Congress. We’ve also taken our fight to the press and social media. On July 14, 2016, a day before Congress left for its summer recess, IAVA secured a major victory when Sen. Kelly Ayotte (R-NH) stood up for veterans by blocking the Veterans First Act from going forward with the cuts. 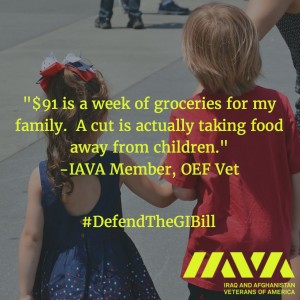 Now that Congress has left Washington, the fight to defend the GI Bill has shifted to the campaign trail. Earlier in the year, IAVA was happy to secure the support of presidential candidate Hillary Clinton. In a recent speech Clinton stated, “I will protect, preserve and defend the post-9/11 GI bill. …Unfortunately, there are some…in Congress chipping away at it. That’s not just wrong, its is shortsighted.”

But while Secretary Clinton continues to support IAVA in defending the Post-9/11 GI Bill, many have not joined her. As stated in a Washington Post article,”…the Veterans First Act is supported by both Republicans and Democrats and has more Democratic co-sponsors than Republican. Sen. Tim Kaine, Clinton’s vice-presidential pick, supported the legislation.” 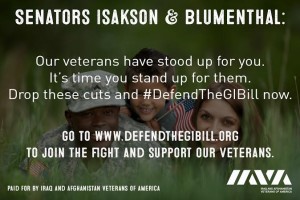 Donald Trump and many of his fellow Republicans have also been noticeably absent in opposing GI Bill cuts. While Sen. Ayotte has been a great champion of Post-9/11 Veterans in the Senate, others have yet to follow her example. IAVA finds this inaction unacceptable and calls on the leaders of both political parties to take a stand and pledge to #DefendTheGIBill and oppose any cuts to critical veterans benefits like the landmark education law. 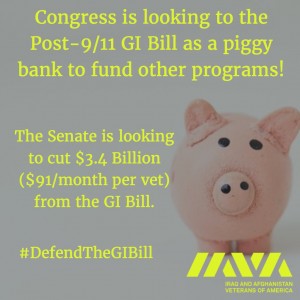 Time is of the essence – as Congress seeks to pass the veterans omnibus before Election Day – and we are fighting on two fronts. We must oppose:

On September 14, 2016, Lauren Augustine, Army Veteran and IAVA Senior Legislative Associate testified before the Senate Veterans’ Affairs Committee (SVAC), the Senators with the power to stop the cuts to the Post-9/11 GI Bill. Near the end of the hours-long hearing aimed at discussing the future of the VA, SVAC Chair, Senator Johnny Isakson (R-GA) asks Lauren pointedly what IAVA’s position is on the so-called Veterans First Act. We’ve been clear with Congress for months that we oppose the proposed cuts to hard earned education benefits in Veterans First so his question left most of us here at IAVA scratching our heads. But not Lauren. Watch her response in the video above.

Published on July 13, 2016 in the Hartford Courant and the Marietta Daily Journal, the hometown newspapers of Senators Veterans’ Affairs Committee leaders, Senator Johnny Isakson (GA) and Richard Blumenthal (CT), calling them out for pushing for the first cut to the Post-9/11 GI Bill.

IAVA’s members — and all those ready to stand with America’s New Greatest Generation — call on all members of Congress, the President and the Presidential candidates to commit to never using the Post-9/11 GI Bill as a piggy bank. IAVA’s membership have already sent over 33,000 messages to Capitol Hill asking their representatives to defend the promise and we are leaning the full resources of IAVA’s Communications, Policy, and Outreach Teams into the campaign.

To join this fight, ask your Members of Congress to commit to #DefendTheGIBill and oppose the cuts in the House and Senate. You can also support IAVA’s advocacy efforts at IAVA.org/donate. 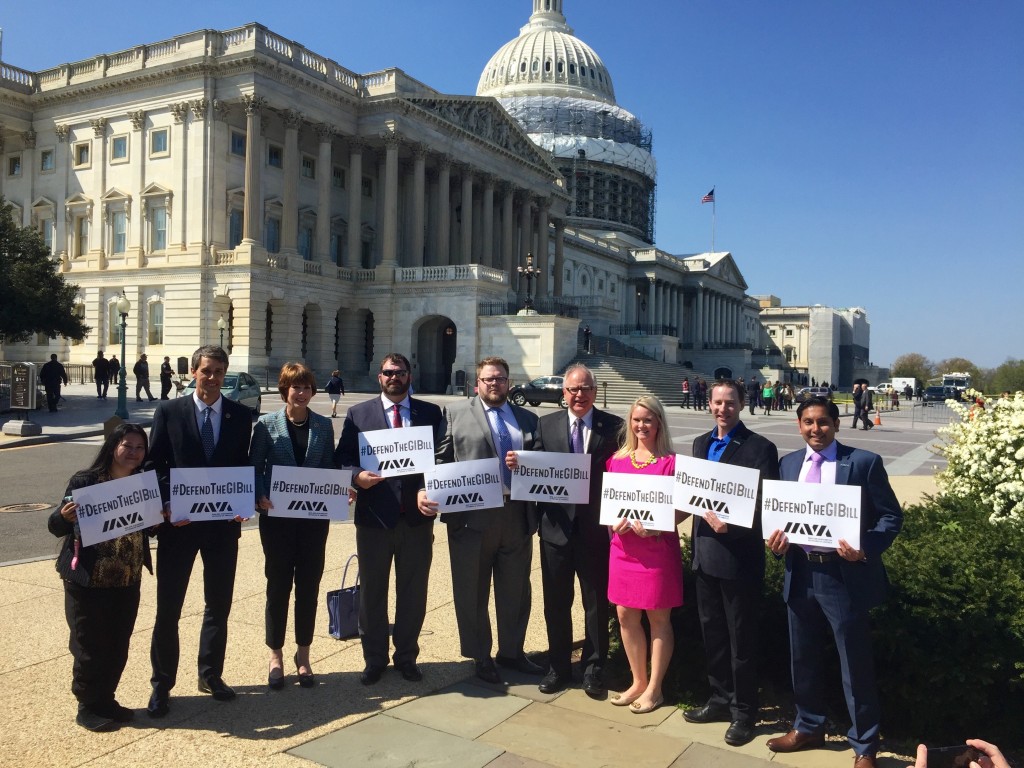 Who Stands with IAVA to #DefendTheGIBill?

Members of the House of Representatives

Don’t see your elected official here? Ask your Senators and Representative to #DefendTheGIBill.

★ = Veteran of the Armed Forces

Who Has NOT Stood with IAVA Yet?