WASHINGTON, D.C. (February 5, 2019) — Today, as President Trump addresses the nation in his State of the Union address, Iraq and Afghanistan Veterans of America (IAVA) incoming CEO Jeremy Butler will be attending the State of the Union. In anticipation of the speech and the response, Butler has prepared a video statement about what veterans want to hear tonight. It is available here. Butler will also provide a reaction via Twitter later tonight after the speech and the Democratic response. 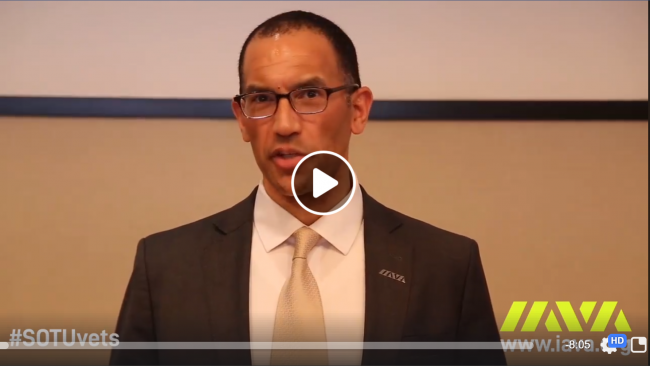 Butler is giving voice to IAVA’s 425,000 members, the 3 million men and women who have deployed overseas to the conflicts in the Middle East and Afghanistan, and the entire generation of post-9/11 veterans. These veterans and currently serving military members will be watching alongside him, wondering whether America’s leaders will choose to prioritize the issues important to them.

IAVA surveys its membership annually about a range of issues from their positions to the conflicts in Iraq and Afghanistan to immigration, firearms, and cannabis. The 2019 results were released last week and are available here. Here’s what veterans care about the most: veterans issues. IAVA members ranked veterans issues above all other issues, including the economy and military/defense issues, for determining their support for a political candidate.

IAVA’s members and supporters will be listening closely to hear how the President addresses pressing issues facing today’s veterans, such as mental health and suicide prevention, Departments of Veterans Affairs and Defense reform, protecting GI Bill benefits, burn pits and other toxic exposures, access to cannabis for medical purposes, and the recognition and welfare of women veterans. These issues comprise IAVA’s “Big 6” priorities.

Butler’s statement is a reflection of these priorities. His reaction later tonight will be a fair evaluation of President Trump and Ms. Stacey Abrams’ performance based on IAVA’s emphatically non-partisan vantage point. Watch the IAVA video statement now, and watch IAVA tonight on Twitter and tomorrow on Facebook Live to hear how our leadership did tonight. IAVA members and all veterans are encouraged to live tweet all day using the hashtag #SOTUVets.