NEW YORK (November 13, 2013) – Last night, Iraq and Afghanistan Veterans of America (IAVA) held its 7th Annual Heroes Gala in New York City. Taking place one day after Veterans Day and likely the last year in which American troops are fighting in Afghanistan, IAVA’s Heroes Gala honored those who have made a unique and lasting contribution to IAVA’s mission to improve the lives of Iraq and Afghanistan veterans and their families. IAVA helped unite the nation during Veterans Day, participating in more than 150 events across the country, including the annual New York City Veterans Day Parade, an IAVA Leadership Fellow attending the White House Breakfast in Washington, D.C. with President Obama, and the #UniteWithVets social media campaign that has brought together tens of thousands of people worldwide. A video with highlights from the Gala can be viewed at http://vimeo.com/79326497.

“These are the faces of our movement and the leaders of America’s future,” said IAVA CEO and Founder Paul Rieckhoff, surrounded by IAVA Leadership Fellows. “We’re not a charity, we’re an investment. Step up tonight and give us the tools we need. And we’ll do the rest and make you proud. And together, we’ll make every day, Veterans Day.” 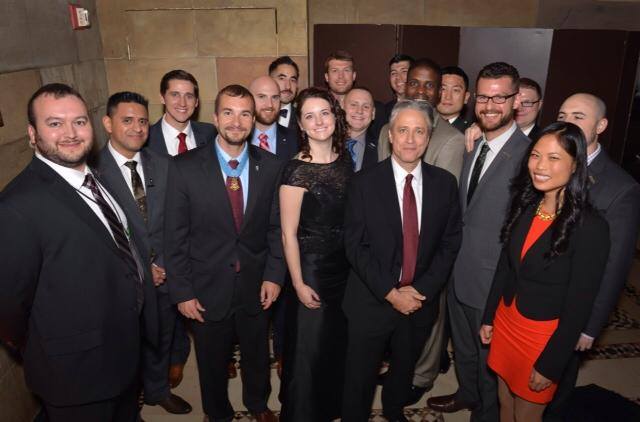 The Heroes Gala was hosted for the fifth year in a row by Brian Williams, anchor and managing editor of NBC Nightly News. IAVA honored Jon Stewart, host of The Daily Show, with the 2013 IAVA Civilian Service Award.

Upon receiving the award, Stewart said, “The least we can do is keep the promises we made to the individuals who have given so much, and I will continue to be an annoyance to the people who do not do that. And I thank IAVA for this honor tonight.”