Washington, DC (June 9, 2018) – This week, Iraq and Afghanistan Veterans of America (IAVA), the leading voice of the Post-9/11 generation of veterans, testified on legislation to initiate support for injuries from burn pits and other toxic exposures, and continued to advocate for its Big 6 priorities during its quarterly Storm the Hill. Earlier this week, IAVA members and leadership met with Representative Jamie Raskin (D-MD), to discuss the growing movement. Following the meeting, Representative Raskin cosponsored the IAVA-back Burn Pits Accountability Act and Deborah Sampson Act.

IAVA members attending the meeting reflect a wide range of diversity and come from across the country. Attendees included Jeff Sigler, Corey Foster, and Shahriar Chowdhury. 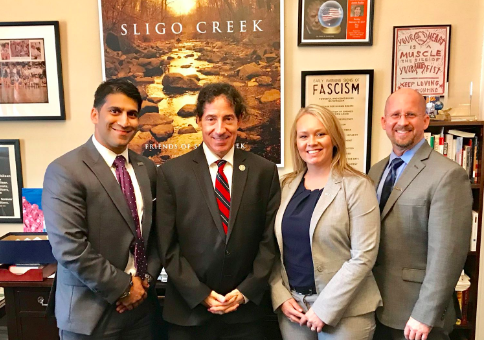