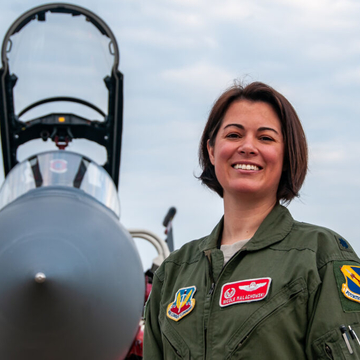 Colonel Nicole Malachowski (USAF, Retired) embarked on an adventure among the first group of women to fly fighter aircraft. She served as a mission ready fighter pilot in three operational F-15E fighter squadrons and has flown over 188 combat hours in both OPERATION DELIBERATE FORGE and OPERATION IRAQI FREEDOM. She served in combat as an F-15E Flight Commander, F-15E Evaluator, Instructor Pilot and Flight Lead. Colonel Malachowski was a Command Pilot with over 2,300 flight hours in six different Air Force aircraft: T-3, T-37, T-38, AT-38, F-15E, and the F-16C/D.

Upon her medical retirement, she voluntarily authored recommendations to the Chief of Staff of the Air Force on how to improve the support of the Air Force’s wounded, ill, and injured, specifically those patients enduring complex and chronic illnesses. Her own personal experience going through the medical retirement process drove her to act on behalf of countless other Airmen enduring similar challenges. Because of her efforts, and in an unprecedented move, the Chief of Staff of the Air Force directed the establishment of a “Task Force on Support to Airmen with Complex Medical Conditions”. In her veteran capacity, Nicole was appointed to this Air Force wide effort, which resulted in dozens of actionable findings and recommendations currently being evaluated for implementation.