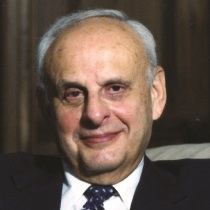 In the universe of foreign policy, Dr. Gelb has lived and worked in three worlds.

He’s lived in the government world: he’s worked in the Senate, on the team of Senator Jacob Javits. He’s worked at the Defense Department as the Director of Policy Planning and Arms Control for International Security Affairs, where he also served as the Director of the Pentagon Papers Project. And he’s worked at the State Department, where he was Assistant Secretary of State, serving as the Director of the Bureau of Politico-Military Affairs. He’s lived in the journalism world: where he worked for The New York Times as a diplomatic correspondent, national security correspondent, deputy editorial page editor, editor of the op-ed page, and columnist. As national security correspondent for the Times, Dr. Gelb was awarded the Pulitzer Prize in Explanatory Journalism.

And of course, he’s lived in the think tank world: where he’s worked as a senior fellow at the Brookings Institution and a senior associate at the Carnegie Endowment for International Peace. He’s also been a Visiting Professor at Georgetown University and an Assistant Professor at Wesleyan University. He was President of the Council on Foreign Relations from 1993-2003 and now serves as the Board Senior Fellow and President Emeritus at the Council.