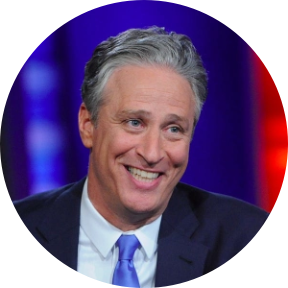 Award-winning comedian Jon Stewart is best known for his long-running stint as the host of ‘The Daily Show with Jon Stewart.’

By 1989, comedian Jon Stewart was hosting the Comedy Central series Short Attention Span Theater. In 1993, he launched MTV’s first talk show, The Jon Stewart Show. Throughout the 1990s, Stewart appeared on several television programs. In 1999, he became anchorman of The Daily Show (later renamed The Daily Show with Jon Stewart), announcing his departure in 2015 after a highly esteemed run. He is also a film and TV actor, appearing in the comic films Half Baked (1998) and Big Daddy (1999), among a variety of other productions.

Early Years
Jon Stewart was born Jonathan Stuart Leibowitz on November 28, 1962, in New York City. (He later legally changed his last name to Stewart.) His family later relocated to Lawrenceville, New Jersey, where Stewart spent most of his youth.

In 1984, Stewart graduated from the College of William and Mary in Williamsburg, Virginia, where he studied psychology and played on the men’s soccer team.

Throughout the 1990s, Stewart appeared on numerous television programs, including a regular role as himself on The Larry Sanders Show. Other credits include the comedy special Jon Stewart: Unleavened, guest host of The Late Late Show with Tom Snyder and the guest host of Mr. Show with Bob & David.

‘The Daily Show with Jon Stewart’
In January 1999, Stewart took over as anchorman for The Daily Show, a popular late-night show that dubbed itself “the most trusted name in fake news.” With fast-paced dialogue and sardonic wit, Stewart, who was also the show’s co-executive producer, became a highly visible critic of Washington politics and the established news media.

Due to the success of The Daily Show, which won a slew of Primetime Emmy Awards, Stewart became an in-demand public figure. He went on to host numerous award shows, including the Grammys in 2001 and 2002, and the Academy Awards in 2006 and 2008.

Emmy-Winning End
In February 2015, Stewart made the announcement during a taping that he would be leaving The Daily Show later in the year. On August 6, 2015, Stewart signed off on his last episode of The Daily Show, celebrating with his news team and getting a star-studded farewell from some of his most famous political targets.

The program once again won an Emmy several weeks later for Outstanding Variety Talk Series, with Stewart using his trademark wit at the ceremony telecast to talk of life post-Show. Comedian Trevor Noah took the reins of The Daily Show after Stewart’s exit.

Films: ‘Half Baked’ to ‘Rosewater’
Stewart is also a film and television actor. His film career has been mixed, from the stoner comedy Half Baked (1998) to the box-office bomb Death to Smoochy (2002) with Robin Williams and Edward Norton, to the successful Adam Sandler vehicle Big Daddy (1999). He also had roles in the romantic drama Playing by Heart and the horror-comedy The Faculty, which were both released in 1998. In addition, Stewart has lent his voice to several animated films, including Doogal (2006).