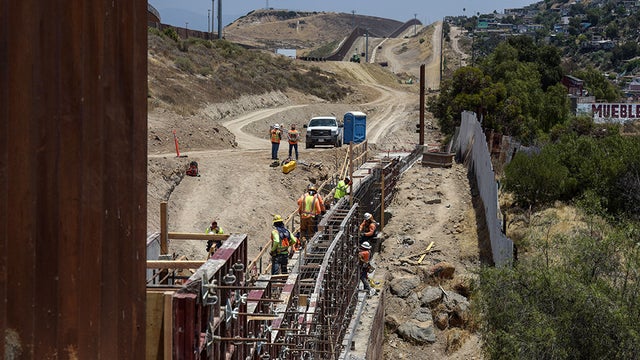 A prominent veterans association on Monday evening backed a pair of lawsuits against President Trump’s move to divert millions of dollars in military funding to his promised wall along the U.S.-Mexico border.

Iraq and Afghanistan Veterans of America (IAVA) filed an amicus brief in two cases related to the Trump’s border wall: Sierra Club v. Trump and California v. Trump. The American Civil Liberties Union filed the two lawsuits, which challenge the legal rationale Trump used in February to declare a national emergency at the southern border and reallocate funds for a wall there.

The group, which has about 425,000 members, said it filed its brief in opposition to the $3.6 billion in moved military construction funding, “which was set aside to help military service members and their families. Instead, the funds are now being diverted to the controversial border wall.”

“IAVA takes no position on the constitutionality of President Trump’s national emergency declaration or the wisdom of building a border wall. Nevertheless, IAVA strongly opposes requiring military service members and their families to pay the cost of funding the wall,” a statement accompanying the brief said.

The move is one of several efforts meant to block Trump’s use of the construction funds for his wall.

In the Senate last week, Democratic-sponsored legislation tried and failed to reverse Trump’s use of military base project dollars by attempting to override his veto of a resolution that would have ended the emergency declaration.

The House tried in March, also unsuccessfully, to override the president’s initial veto.

The Pentagon on Sept. 4 released a list of military construction projects that would see some of their funding go toward the wall, including schools and hurricane-destroyed bases.

IAVA contends that many of those deferred plans will make service members stationed in the United States and abroad less safe.

Among the gutted tasks is a $16 million undertaking needed to revamp a rail holding area at an ammunition plant in Indiana, where service members “currently work in violation of Army safety standards while handling and storing explosives.”

Another is a $37 million project for a specialized Air Force facility in Maryland meant for unloading hazardous cargo and a range for bomb-defusing training.

The IAVA brief also claims that service members and their families will be denied basic living necessities and emergency services because of the funding shift.

“For instance, the Air Force needs $41 million to replace a failing central heat power plant boiler at Eielson Air Force Base in Alaska, where winter temperatures reach 65 degrees below zero,” the brief says.

The existing schools “all suffer from varied states of disrepair and overcrowding,” such as at the middle school at Joint Base Andrews, Md., “which has a waitlist of 115 children, suffers from mold and pest infestations as well as sewage backups and heating and ventilation failures.”

Bechtel Elementary School in Germany is described as “in failing condition” and “does not meet U.S. fire suppression standards and needs extensive infrastructure work ranging from electrical branch circuits to lighting to plumbing and piping.”

The brief presses the courts to cancel the president’s diversion of funding and reinstate the money back to the intended projects.

“Even if Congress decides to fund these projects again in later years, that would lead to the deferral of other high-priority military construction even further down the line,” IAVA argues.

“Service members are used to discomfort. … But they should never be asked to work in unnecessarily unsafe or harmful conditions, or to wait even longer for basic facilities that are already long overdue. That is the result of the funding diversions, and this Court should bear that result in mind as it considers the issues before it,” IAVA adds.