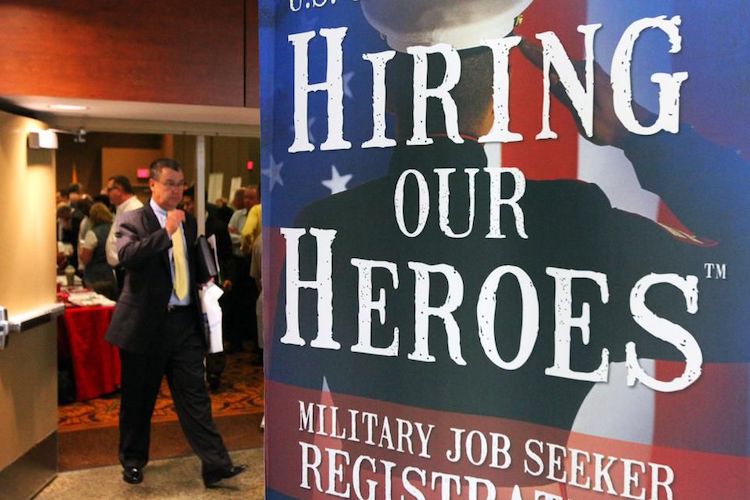 The jobs market defied predictions with a burst of new hires in July that kept the unemployment rate for all veterans at a pre-pandemic level of 2.7% while the national jobless level ticked down from 3.6% to 3.5%, the Labor Department reported Friday.

But for post-9/11 veterans, whose jobless rate has been most subject to fluctuation, the unemployment rate in July was 3.4%, up half a percentage point from 2.9% in June, according to the Labor Department’s Bureau of Labor Statistics (BLS).

“It’s been up and down, up and down” for post-9/11 veterans since the COVID-19 pandemic hit in early 2020, Tom Porter, government affairs vice president for the Iraq and Afghanistan Veterans of America, said in a phone interview with Military.com.

“We hope this is just a blip on the veterans’ side of this,” Porter said of the increase in unemployment for post-9/11 veterans. But he added that the latest BLS monthly employment situation report was “good news overall. Veterans are continuing to experience a positive job situation.”

The BLS data showed that the unemployment rate for all veterans, which dipped below 3% in March for the first time since the start of the pandemic, remained at 2.7% in July, the same as it was in June.

Robert Frick, corporate economist for Navy Federal Credit Union, said that the fact “the veterans unemployment rate held steady at 2.7% in July, well below the non-veteran rate at 3.5%” is an encouraging sign.

“However, veterans’ numbers are volatile given sample size and other issues. What’s important is the downward trend in veterans unemployment in the last year,” Frick said in a statement to Military.com. “Training while in-service and the GI Bill benefits help veterans keep an edge in the hot jobs market.”

The surprising results in the BLS report were fueled by a major increase in total non-farm employment of 528,000 new jobs, far exceeding analysts’ predictions of about 250,000.

“Both total non-farm employment and the unemployment rate returned to their February 2020 pre-pandemic levels,” William Beach, the BLS commissioner, said in a statement.

The positive BLS report came despite two consecutive quarterly downturns in the gross domestic product, continuing inflation and two interest rate increases of 0.75% each by the Federal Reserve Bank.

In response to the BLS report, President Joe Biden said in a statement, “More people are working than at any point in American history. There’s more work to do, but today’s jobs report shows we are making significant progress for working families.”

This piece was originally published by Military.com on August 5, 2022.