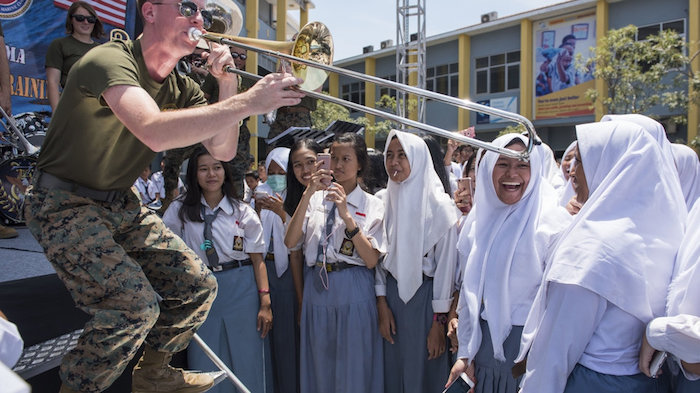 The probe is being conducted by Ginnie Mae, a government-owned corporation whose purpose is to make mortgages more affordable. It does so by guaranteeing repayment on $2 trillion of mortgage bonds even if borrowers default on the underlying loans. Ginnie-backed securities support several federal housing initiatives, including programs in which loans are made through the Department of Veterans Affairs. | Bloomberg >>

The majority of those veterans with federal posts are in the departments of Defense and Veterans Affairs. Combined, those two agencies boast nearly 450,000 of the government’s 625,000-plus employees with military experience. Nearly half of all Defense Department civilian employees and one-third of all VA workers are veterans. | Military Times >>

In 2013, while the Affordable Care Act that passed in 2010 was still being implemented, 9.1 percent of veterans under 65 were uninsured. That fell to 5.8 percent by 2015 – a drop attributed to Medicaid enrollment facilitated by the ACA. A repeal would reverse those gains, and the recently proposed GOP policy would lead to more veterans losing insurance than gained coverage under the ACA, according to the study by policy researcher Rand Corp. | Stars and Stripes >>

Iraqi security forces have made great progress toward defeating the Islamic State in Iraq. Whether this military success will translate into enduring stability will depend in large part upon the attitudes of Iraqi Sunnis toward the postwar state. Since 2003, Iraqi Sunnis have viewed the political system as unfair and marginalizing their role in the nation’s politics. A recent public opinion survey we carried out reveals a startling and potentially significant shift in Sunni attitudes toward the Iraqi state. | The Washington Post >>

Three suicide attacks claimed by Islamic State killed at least 60 people in southern Iraq on Thursday, a health official and police sources said, suggesting a shift in the ultra-hardline group’s tactics since it lost control of its stronghold in Mosul. Iraqi and Kurdish security officials say the Sunni militants are likely to wage a guerrilla war in Iraq after their self-proclaimed caliphate in Mosul collapsed. | Reuters >>

Kentucky Republican Sen. Rand Paul, an anti-war crusader, had offered an amendment to the 2018 National Defense Authorization Act (NDAA) to repeal war authority granted in 2001 and 2002. He argued Wednesday that the current war authorizations are outdated and that Congress needed to “grab power back” from the executive branch, which he said has been using the war authorizations for “unauthorized, unconstitutional and undeclared war.” | CNBC >>

Authorities said they were transported to Womack Army Medical Center by helicopter after an explosion on one of the training fields at the base, according to WRAL. “There was an incident that occurred on one of the ranges,” Special Operations Command spokesman Lt. Col. Rob Bockholt told the Associated Press. “We’re looking into exactly what happened.” | Business Insider >>

On September 11th, 2017 the Navy released images of the USS Jimmy Carter (SSN-23)-the Navy’s one-off, heavily modified Seawolf class nuclear fast attack submarine-as it made its way through the Hood Canal on its way back to its home port at Naval Base Kitsap-Bangor in Washington State. Flying from the boat’s conning tower was a big Jolly Roger flag. Its peculiar presence set off a round of inquiries as to its meaning. | The Drive >>

Three of the Marines were listed in critical condition Wednesdayafternoon at the Burn Center at the University of California San Diego Health and five were in serious condition, the Marine Corps said in a statement. Four other Marines were rushed to the University of California Irvine Medical Center in nearby Orange County, including two in critical condition there. | ABC News >>

“We got reports back that the outlying communities of Houston were being forgotten,” said Orrick, who did relief work for Hurricane Katrina as a soldier in 2005. “We sent a recon team down to see that and it was true. The VFW there in Rockport called us said, ‘Hey! We need help here.'” | WTHR >>

Humble Design, which helps homeless people successfully transition from a shelter to independent living, is focusing on homeless veterans at its newly acquired Dearborn warehouse, which volunteers are helping refurbish. The non-profit organization, founded in 2009, helps people leaving a shelter into low-income housing by providing a clean living space with donated household supplies and gently used goods and furniture. | Press and Guide >>

An Army veteran who lost all four limbs in an explosion in Afghanistan says the name of his newborn son pays tribute to two medics who helped save his life. Travis Mills runs a retreat in Maine for combat-injured veterans. He says his son’s name, Dax, is a mashup of the medics’ names, Daniel and Alex. He says that without them, “We would not be where we are today.” | The Boston Globe >>