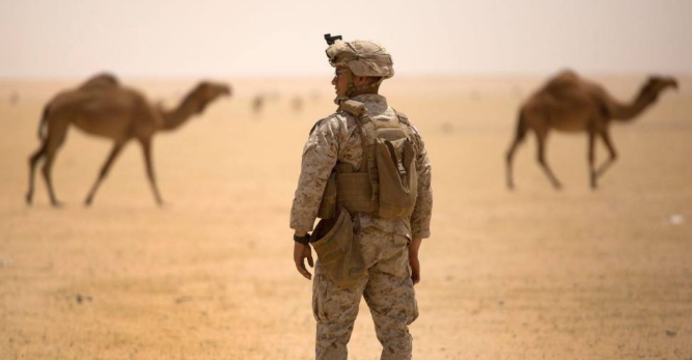 Sets aside $505 million for gender-specific health care, which the VA said is a 7 percent jump from fiscal 2017. Iraq and Afghanistan Veterans of America, which has been advocating this year for increased VA services for women veterans, still criticized it as a “ridiculously small commitment.” | Stars and Stripes >>

The national discourse of veteran employment has evolved considerably in recent years, as public perceptions of veterans and their contributions to the civilian workplace have shifted. In August 2011, President Barack Obama announced to a forum of employers and concerned stakeholders at the Washing Navy Yard, “Today, we’re saying to our veterans, you fought for us, and now we’re fighting for you.” He announced in February 2012, “… we’re going to do everything we can to make sure that when our troops come home, they come home to new jobs and new opportunities.” | U.S. Naval Institute >>

Los Angeles has one of the nation’s worst rate of homeless veterans, but its Veterans Affairs campus doesn’t support many homeless vets. Instead it hosts parrots, gardens, a baseball stadium and other features. Soon, however, officials say the facility will begin building a new community of local homeless veterans. | NPR >>

The oil ministers of Iraq and Iran both told CNBC on Wednesday that they’re ready to back a deal to extend OPEC-led production cuts through the first quarter of 2018. OPEC is meeting in Vienna to discuss rolling over its six-month deal with 11 other exporters to remove 1.8 million barrels a day from the oil market in order to shrink global crude stockpiles. | CNBC >>

The Pentagon is pushing to reinforce the Afghan army with up to 5,000 more American troops. Some administration officials expected Mr. Trump to make a decision on a deployment before the NATO meeting, which would have laid down a marker for the other alliance members. | The New York Times >>

Loose controls made it easier for equipment to end up in the hands of jihadist groups and Iranian-backed Shia paramilitary forces hostile to the US and accused of human rights violations. Amnesty also said it had regularly documented lax controls and monitoring of equipment in the Iraqi chain of command. | Financial Times >>

The raid targeted a compound that was being used by AQAP “as a headquarters, a place to meet and plan for external operations,” according to US Navy Capt. Jeff Davis, a Pentagon spokesman. The mission was to “disrupt” operations in a known safe haven, though another US defense official could not point to a specific disrupted operation. | CNN >>

The chemical weapons attack in Syria this past April was a tragic reminder of why most of the world has renounced the use of such munitions. And it’s sadder still that it came almost exactly 20 years after the enactment of the Chemical Weapons Convention, which calls for a halt to the production of chemical weapons and the destruction of any remaining stockpiles.  | Fast Company >>

“I think this whole thing, as disturbing and as difficult as it has been, has actually been a benefit,” said Gen. Robert Neller during testimony at a defense subcommittee hearing for the Senate Appropriations Committee. “I think it’s been a benefit to our Corps because I think it’s brought up a very simple point – it’s really not about social media, it’s about how we view women in our Marine Corps.” | Marine Corps Times >>

Back in 2009, Marine Corps veteran Donald Downer Jr. started sending care packages to troops in Afghanistan and Iraq. Last Friday, he sent his 3,000th care package, this one addressed to Capt. John Lefebvre who is currently serving in Afghanistan, reports the Baltimore Sun. At approximately $17.35 per care package, it’s estimated that Downer has spent almost $116,000, according to the paper. | Marine Corps Times >>

Joey Jones is a man whose work for military families caught the attention of Grammy winning artist Zac Brown. The two have teamed up and are now finding unique ways to help make a difference in the lives of those who’ve struggled through the wars in Afghanistan and Iraq.  | Fox 5 Atlanta >>

Clinton Smith hires veterans because he knows military service has helped them become dedicated and hard-working staffers. “When you say, ‘I need you to do this right now,’ they get it done and get it done well,” says Smith, a former Marine who is CEO of Government & Civil Employee Services, a financial planning company in the western Pennsylvania borough of Indiana. | The Tribune >>