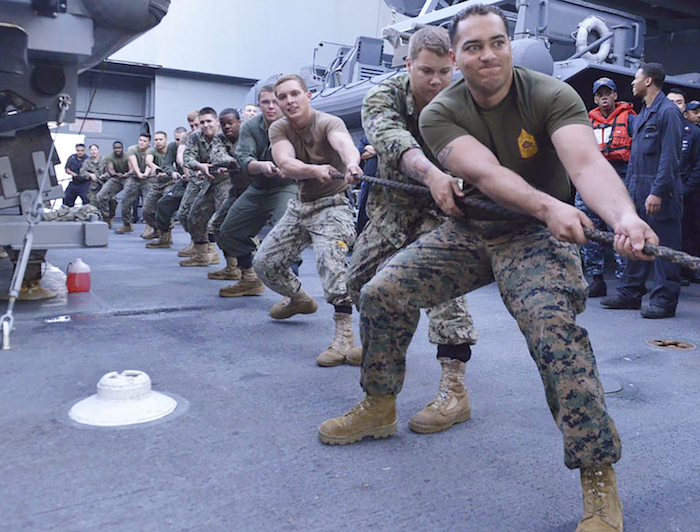 Vets Pleading for Cleanup of Black Mold Festering in VA Hospital
Veterans living at a long-term care facility in a Chicago-area VA hospital are pleading for congressional intervention over being forced to live the past 10 months with black mold growing in their housing complex. | Military.com >>

Military Sexual Assault Victims Discharged After Filing Complaints
The scariest part of Emily Vorland’s relatively uneventful 2009 deployment to Iraq was that the enemy wore Army green, just like she did. When a higher-ranking male officer sexually harassed her, her commander told Vorland to file a formal complaint. | Time >>

War memorial smashed at veterans park
One or more vandals over the weekend smashed a pillar at the Veterans Memorial Park off Tower Road that commemorates the members of the U.S. military who have lost their lives since 9/11. | The Gainesville Sun >>

A newly promoted Afghan general was killed Thursday when he stepped on an anti-personnel mine in southern Afghanistan, the military said. Brig. Gen. Abdul Basir, commander of the first brigade of the Afghan National Army’s 205 Corps, detonated the mine while out “to check on the efforts of the army”. | Stars and Stripes >>

Despite the uncertainty about U.S. future force numbers in Afghanistan, most NATO military chiefs say they are not planning to withdraw their forces from the war-torn country, the chairman of NATO’s military committee said Wednesday. | Voice of America >>

U.S. commanders in Iraq are urging the Iraqis to keep up the fight against the Islamic State group rather than consolidate their military forces in Baghdad to protect against an uptick in terrorist attacks. | Military Times >>

Iraq has reached a $5.4 billion standby agreement with the International Monetary Fund that could unlock $15 billion more in international assistance over the next three years, Finance Minister Hoshiyar Zebari said on Thursday. | Reuters >>

Iraqi forces retook a strategic town in Anbar from Islamic State Thursday, in the wake of a weeklong series of deadly attacks by the insurgents in Baghdad, extending a string of battlefield victories against the extremists. | Wall Street Journal >>

All seven crew members made it out safely when their B-52 crashed on Guam shortly after takeoff, the U.S. Air Force said. No injuries were reported. The plane aborted on takeoff and caught fire at about 8:30 a.m. Thursday Guam time, Pacific Air Forces public affairs said. It crashed on the flight line of the base. | ABC News >>

The chiefs of the military’s unmanned systems departments see a near future in which robots operate side-by-side with ground-pounders downrange. And they already foresee their biggest challenge: establishing an emotional bond of trust between man and machine. | Military.com >>

The one-star in charge of outfitting leathernecks with everything they drive, shoot and wear says Marines should never have to get in a fair fight. | Marine Corps Times >>

David Bitonti took it to the limit. After three decades in the U.S. Navy, the 56-year-old oral and maxillofacial surgeon and dental anesthesiologist had to call it quits in the military—that’s the law. | The Town Courier >>

As Iraq War veteran Randy Shack prepares to head to the driving range at Cedar Crest golf course, he remembers how he felt just a few months ago. “It was just so much anxiety, because I’m a big hermit,” said the Rockwall resident. | WFAA >>

This group of carpenters were military veterans or veterans’ families, brought together by a desire to help another veteran. Griffin had been honorably discharged from the Delaware National Guard following an injury during training. | The Dover Post >>

House Republicans’ plans for next year’s Veterans Affairs and military construction spending were nearly undone Thursday due to an ongoing fight over protections for gay and transsexual workers in federal contracting law. | Military Times >>

The U.S. House of Representatives has passed the Veteran Emergency Medical Technician Support Act of 2016. The legislation directs the Department of Health and Human Services to create a transition program for military medics. | KXAN-TV >>

House and Senate lawmakers adopted separate spending plans for the Department of Veterans Affairs on Thursday, setting the stage for another program funding boost in fiscal 2017 but also months of negotiations over a host of new veterans initiatives. | Military Times >>