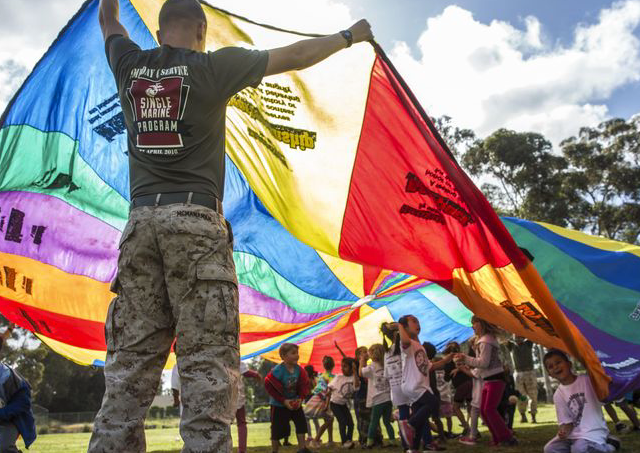 Marine Corps Lance Cpl. Chase McManaman holds a parachute during an activity at an elementary school on April 29, 2016, in San Diego. Marines volunteered for a fitness challenge, which allowed children and Marines to complete a series of exercise stations during the school day. Sgt. Lillian Stephens/Marine Corps | Military Times >>

VA relied on five-year old suicide data
The Department of Veterans Affairs has not provided updated statistics on veteran suicide rates and is still relying on statistics from five years ago to evaluate the effectiveness of their mental health and suicide prevention programs, according to testimony from lawmakers and a veteran advocacy group. | The Washington Examiner >>

Invictus Games: Dogs who heal wounded warriors
Service dogs are becoming more and more common in daily life, but many of the ways in which they assist their masters still go largely unnoticed. These animals don’t just help people who have visual or hearing impairments or mobility issues. | ESPN >>

A shadowy new unit run by Afghanistan’s main intelligence agency has begun operations in southern Helmand province with a mission to exploit divisions within the Taliban insurgency, government officials and a militant spokesman said. | Reuters >>

“This is the valley where I learned empathy,” says Matthew “Griff” Griffin, a former Army captain, holding a photograph of a procession of Army Rangers winding their way through Afghanistan’s snowy Korengal Valley. | Foreign Policy >>

The project, financed by the U.S. government and Washington-based World Bank, could help to ease regional tensions over the use of hydropower resources, but faces security challenges due to fighting in Afghanistan. | Reuters >>

Three Iraqi officers were killed and 10 others wounded early Thursday when two suicide bombers blew themselves up at a police station in western Baghdad, authorities said. The Sunni terror group ISIS claimed responsibility for the attack in a statement, saying that 20 police officers had died. | CNN >>

Iraq overtook Saudi Arabia as the top crude exporter to India in April for the first time since December, according to data compiled by Reuters, as the two biggest OPEC producers fight for market share in Asia’s fastest growing oil market. | Reuters >>

The timing of the long-awaited assault to retake Mosul from Islamic State control will fall on the shoulders of Iraqi security forces, not American commanders, the Pentagon said Thursday. | The Washington Times >>

A former Navy research ship given to the Philippines is set to sail out of Pearl Harbor on Thursday en route to its new home. The BRP Gregorio Velasquez, formerly the R/V Melville, is the Philippines’ first dedicated marine research vessel. | Stars and Stripes >>

As the Army rolls out a new physical assessment for its newest soldiers, the service also is studying the possibility of creating a combat readiness test for troops already in the ranks. | Army Times >>

Both the US Department of Defense (DoD) and NATO have put out requests for military-related apps built on blockchain, a decentralized digital ledger system. | Defense Ones >>

Patrick J. Murphy was returning from a veterans advocacy event in Washington that Tuesday night, taking the 7:10 p.m. Amtrak Train 188 as he’d done countless times as a former U.S. congressman from the Philadelphia suburbs. He sat in the cafe car writing an analysis of the day’s promises made. He was wearing his earbuds, listening to Bruce Springsteen, or maybe it was Beyoncé. | The Washington Post >>

A Richmond Army veteran is going home happy after winning two gold medals at the Invictus Games in Orlando. The Invictus games are an International Paralympic-style competition for wounded veterans. | WTVR >>

The Senate Armed Services Committee’s 2017 defense policy bill set to be unveiled on Thursday will not include additional special immigration visas for Afghan interpreters who helped U.S. troops during the war, according to a congressional source. | The Hill >>

Congressional appropriators would require the Defense Commissary Agency to set aside $48 million in 2017 for the shipment of produce to Pacific commissaries. | Military Times >>