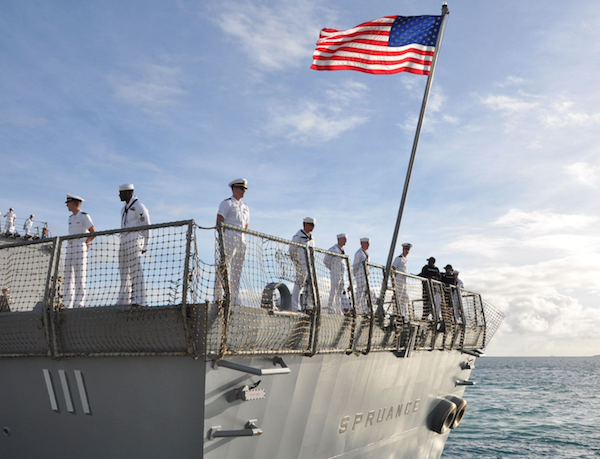 Relief Fund Helps Veterans Misled By Private Schools
Four veterans of the Iraq and Afghanistan wars recently were awarded $5,000 grants to help pay down student loan debt they racked up while attending for-profit colleges. The grants came from the Veterans’ Student Loan Relief Fund, a four-year-old organization that has helped more than 40 veterans it says have been misled into draining their GI Bill benefits and taking out onerous student loans. | Military.com >>

Genetic variants may put some soldiers at higher risk of PTSD
In a massive analysis of DNA samples from more than 13,000 US soldiers, scientists have identified two statistically significant genetic variants that may be associated with an increased risk of post-traumatic stress disorder, an often serious mental illness linked to earlier exposure to a traumatic event, such as combat and an act of violence. | Science Daily >>

U.S. military operations in Iraq expand on paper, but not on the ground
Nearly a month after Defense Secretary Ash Carter announced plans to expand the U.S. military mission in Iraq, little additional combat power has reached the front lines outside Mosul where the Iraqi army has been slow to reclaim ground from well entrenched Islamic State militants. | Military Times >>

The A-29 Super Tucano attack aircraft supplied by the U.S. to the Afghan air force have been used extensively since arriving in January, flying hundreds of sorties including close-air support missions, NATO’s Resolute Support headquarters in Kabul said Tuesday. | Military.com >>

A combat-hardened Green Beret has unleashed a barrage of indictments against the command in Afghanistan and policymakers in Washington, saying the 14-year-old war effort suffers from a “profound lack of strategy” and that special operations overseers show “moral cowardice.” | Washington Times >>

Newly-retired Los Angeles Lakers Kobe Bryant wasn’t content to merely work hard at being a legend in basketball during his career. Growing up in Italy, he learned to love soccer as a fan, admiring the beautiful game and the national team of Brazil as well as the club squad Barcelona for their high level of play. | ESPN >>

Three suicide bombings claimed by Islamic State across Baghdad killed at least 80 people on Wednesday, Iraqi police and hospital sources said, in the deadliest attacks in the Iraqi capital this year. | Reuters >>

The U.S. Navy SEAL who was shot and killed by Islamic State militants in Iraq on May 3 is being promoted to the rank of chief petty officer, the Navy said Wednesday. | The Washington Post >>

They share little more than an enemy and struggle to communicate on the battlefield, but together two relatively obscure groups have opened up a new front against Islamic State militants in a remote corner of Iraq. | Reuters >>

The U.S. Air Force has set the stage for a three-way contest to build its GPS 3 satellites, giving rivals Boeing and Northrop Grumman a chance to wrest work worth billions of dollars away from Lockheed Martin. | Fortune >>

China defended its militarization of its artificial reefs in the disputed South China Sea on Wednesday, saying repeated U.S. Navy patrols in the area are forcing it to boost its islands’ defense capabilities. | Fox News >>

De Los Santos joined the Army after 9/11 and became a special operations staff sergeant out of Fort Bragg in North Carolina. He lost his leg serving in Afghanistan after a rocket-propelled grenade (RPG) hit his patrol. | Yahoo >>

A Campbellsport native is showing off a gold medal after winning the 400 meter race in the Invictus Games — a competition among wounded soldiers from 14 countries. | WBAY >>

Getting down to the root of all the Himalayan blackberry bushes that lined the hill was hard work. Every once in a while Henry Revelez would pull out his inhaler, breathe deeply and start shoveling again. | KXTV >>

Defense officials are developing four courses to educate the military community about new retirement plan options for the 1.6 million service members who will make big decisions starting in 2018 — about whether to opt in to the new retirement system or stay with the current system. | Military Times >>