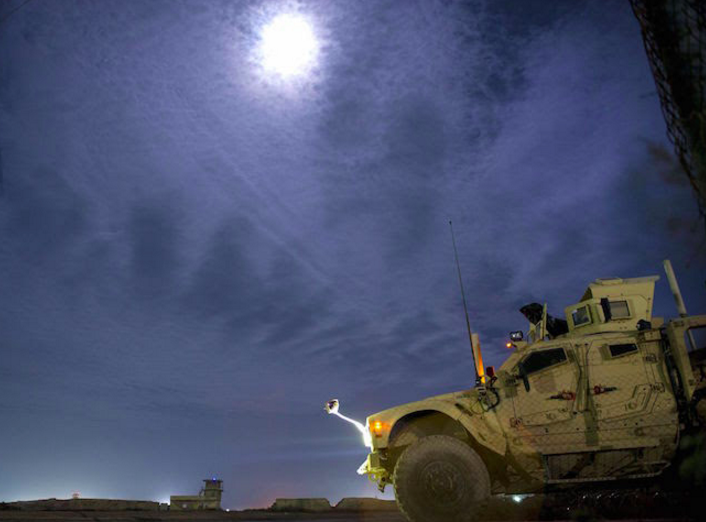 Report Finds Sharp Increase in Veterans Denied V.A. Benefits
After deployment, Mr. Bunn, suicidal and haunted by nightmares, went absent without leave. The Marine Corps charged him with misconduct and gave him an other-than-honorable discharge. As a consequence, the Department of Veterans Affairs does not technically consider Mr. Bunn a veteran and has denied him permanent heath care, disability pay and job training intended to ease his return to civilian life. According to a new report, he is one of a growing number of veterans ruled ineligible for benefits because of less-than-honorable discharges. | New York Times >>

This is the U.S. military’s new medal for troops fighting ISIS
The Pentagon has created a new medal to honor the thousands of U.S. troops who have deployed to Iraq or Syria to support operations against Islamic State militants. The Operation Inherent Resolve Campaign Medal will be awarded to service members who have deployed to Iraq or Syria or its airspace or territorial waters since June 15, 2014, a defense official said. | Military Times >>

The United States has spent 15 years fighting in Afghanistan; more than 2,000 American lives have been lost there since the war began, and hundreds of billions of dollars have been spent in an attempt to rebuild it. A watchdog who oversees U.S. spending there warned it could all be for naught. | Foreign Policy >>

There is no evidence enemy fire caused a U.S. F-16 to crash on takeoff from Bagram Air Field late Tuesday, officials said. The pilot ejected safely. The Taliban claimed to have shot down the aircraft and that there were casualties. Capt. Bryan Bouchard, spokesman for the 455th Air Expeditionary Wing, said that was not true. | Stars and Stripes >>

American taxpayers have lost “billions” of dollars by pouring money into rebuilding Afghanistan with little planning or accountability, the government’s top watchdog for the region told the Tribune-Review on Tuesday. | Tribune-Review >>

The Islamic State continues to expand its deadly global reach, organizing coordinated attacks on major European cities and inspiring copycat rampages in places like San Bernardino, Calif. But at home — in its putative state across Iraq and Syria — ISIS is in retreat, beset on all sides by advancing enemies. A year from now, there may be no Islamic State in Iraq or Syria, and nowhere to fly the fearsome black flag. | Boston Globe >>

It is a battle to win back not only territory, but also the hearts and minds of civilians, many of whom initially welcomed the militants as saviors from a Shi’ite Muslim-led government they perceived as heavy-handed and sectarian. | Reuters >>

As the White House mulls sending more troops into Iraq to support the fight against Islamic State fighters, the chairman of the Joint Chiefs of Staff said existing efforts to counter the extremists, including airstrikes, were increasing in effectiveness. | Military.com >>

The Army is looking to extend the length of basic training, just six months after beefing up the course by rolling out a series of new tests that are mandatory for graduation. “The No. 1 priority is readiness in our Army,” said Command Sgt. Maj. David Davenport, the senior enlisted soldier for Training and Doctrine Command. | Army Times >>

The U.S. Army in Europe will have a permanent footprint of three fully manned brigades on the continent by next February, defense officials announced Wednesday. The Army will begin continuous rotations of U.S.-based armored brigade combat teams on nine-month deployments to train with Eastern European allies, officials said. | Military Times >>

According to deployment statistics provided by the Air Force, tens of thousands of airmen are still deploying these days — but the pace is declining from a few years ago, when the Afghanistan surge was at its peak. However, as the fight against the Islamic State — a war driven almost entirely by United States air power — ramped up, the shape of the Air Force’s deployed forces has also changed, giving some airmen a break, but taxing others to a concerning degree. | Air Force Times >>

A bystander is being hailed a hero after saving the life of a paralyzed man trapped inside a house fire in Memphis this morning.  Morgan Jones, a U.S. Marine, was in the neighborhood working on construction when the fire broke out around 6 a.m. Jones called 911 and was told someone was trapped inside. That’s when he jumped into action. | Fox 13 >>

The days start early for Josh Collins and his wife, Tonia. Getting prepared to paddleboard takes time. His mission comes from the heart. “If any one soldier that’s touched by this that can find a way to fight their own battle, then that’s a success,” Collins said. He suffered a brain injury himself while serving 20 years with Army special forces. | WLOX >>

Determined to save his boss’ life, Snyder, an Iraq War veteran, shed 25 lbs. in three weeks by implementing workout and diet disciplines he picked up during his time in the Army.  “It was just something I had to do,” Snyder, 48, tells PEOPLE. “When somebody needs help, it’s just what you do. It was a no-brainer.” | People >>

Schedulers at Department of Veterans Affairs clinics across Washington state were so stressed out by patient growth and low staffing two years ago that they took questionable short-cuts in booking medical appointments, according to a group of audits released this week. | The News Tribune >>

The cost to taxpayers of treating Washington, D.C.-area military veterans suffering from hepatitis C has eclipsed $64 million per year, according to a review of U.S. Department of Veterans Affairs records by the News4 I-Team. The fast-rising cost is attributed to a cutting-edge but expensive medication the agency began dispensing last year to veterans in Virginia, Maryland, D.C. and West Virginia. | NBC 4 Washington >>