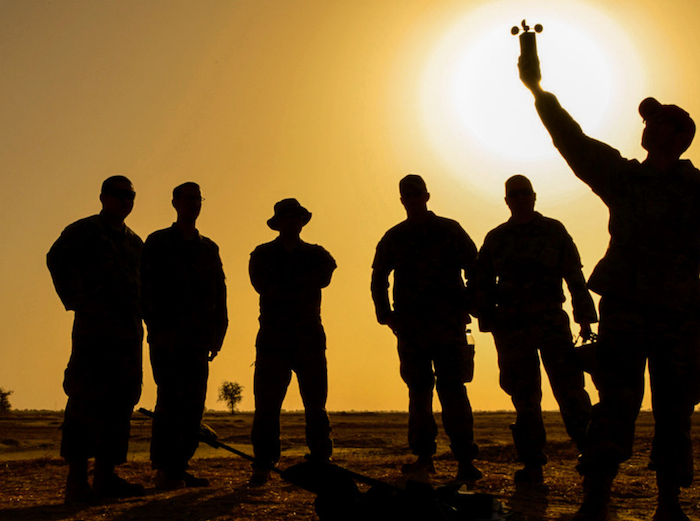 U.S. and multinational soldiers take a wind reading as they wait for a C-130 aircraft during a static line jump and airdrop as part of a Flintlock 17, an exercise with forces from more than 20 nations, in N’Djamena, Chad, March 4, 2017. Richard Bumgarner/Army | Military Times >>

Written by IAVA chief of staff Allison Jaslow, an Army veteran of the Iraq War, the statement called out any officers and senior non-commissioned officers in Marines United who “stood silent when the phrases like ‘barracks whore’ were used in conversation.” | San Diego Union-Tribune >>

After the United States withdrew troops from Iraq in 2011, thousands of combat troops were expelled from the force with less than honorable discharges as the military came under pressure to downsize quickly. This left a large number of veterans — including many kicked out for minor infractions — without access to health care and other benefits that are granted to service members who leave the armed forces with honorable discharges. | The New York Times >>

News of OutVets’ inclusion that year made national headlines. Bishop said the response along the parade route was overwhelming. Thousands of people held signs, waved rainbow flags as OutVets marched by. “My Vietnam vet guys had tears from their eyes the entire time they were walking,” Bishop said. “They didn’t get that kind of response when they came home.” | The Washington Post >>

The remains of hundreds of mainly Shi’ite inmates killed by Islamic State militants (ISIS) when they overran a prison in northern Iraq more than two years ago have been unearthed by forces retaking the area from the group, a spokesman said. | Newsweek >>

But one country is now actively promoting its natural resources to win Trump’s attention for its desperate cause: Afghanistan. The government, led by President Ashraf Ghani, has pitched Trump on its vast mineral reserves in an effort to keep the new president invested in the country’s fate. | Politico >>

Iraqi forces have retaken around 30 percent of west Mosul from Islamic State militants, a commander of the elite Counter Terrorism Service (CTS) said on Sunday, as soldiers pushed further into the jihadists’ territory. | Reuters >>

“They’re quick-fire meals that can be done in a certain amount of time,” Sgt. 1st Class Carlton Hunter, of the 266 Quartermaster Battalion, said. “[Soldiers] have seven to 10 minutes to get their plates and be on their way.” Hunter, who was involved with the testing of the truck, said each of the roughly 300 soldiers who used the food truck were asked to provide feedback in a survey. | Army Times >>

Late last August, just 50 miles south of Washington, D.C., a series of explosions rocked the normally placid Potomac River. The blasts came from artillery belonging to the USS Dahlgren, which was testing a new targeting system. Using a drone to observe its marks, the targeting system automatically recalculated its aim and retrained the Dahlgren’s gunners. The following volley hit, clearly demonstrating the value of the targeting system. But perhaps more impressive was the USS Dahlgren itself, which, despite its name, isn’t a ship. | Newsweek >>

After separating from the military, Taylor worked as a defense contractor in Yemen and returned home to Hampton Roads, where became a real estate developer. Now, he’s one of a handful of veterans elected to Congress in 2016. | Task and Purpose >>

Preparing to enter the fields of battle, U.S. veterans gathered Saturday outside a Paramount Ranch home to Hollywood gunslingers. Only instead of spin-cocking their Winchesters, they drew firehoses as they trained to fight wildfires across the West. “I think it’s an awesome opportunity,” said John Patrick, a 38-year-old former Marine from Roseville, who was part of the first U.S. invasion force in Iraq in 2003. “It’s an opportunity to give back to the community. | Los Angeles Daily News >>

More than a hundred wounded veterans and supporters rode though Atlanta Sunday for the conclusion of the 20017 United Healthcare “Beaches to Peaches Challenge.” The challenge benefits injured veterans and first responder riders of Project Hero. | CBS46 Atlanta >>