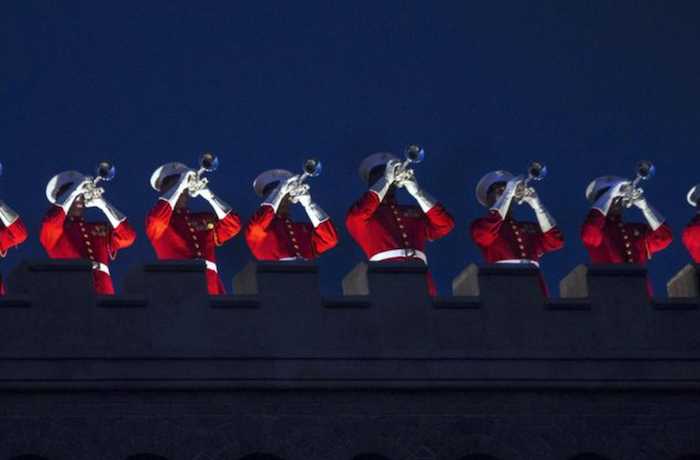 Word spread rapidly from Florida A&M University President Elmira Mangum to friends on social media around the country Monday when it was learned Antonio Davon Brown was among the 49 people killed Sunday morning during a massacre inside an Orlando nightclub. | Army Times >>

Nearly 1,190,000 veterans obtained health services from the VA between Oct. 1, 2001 and March 31 of last year, according to the agency. Almost 379,000 of them were diagnosed with PTSD at some point. Navy veteran Jordan Miller is one of those patients. He’s also considered a PTSD success story at the VA hospital in La Jolla, which is helping to promote June as PTSD Awareness Month. | San Diego Union-Tribune >>

A Marine veteran who served in Afghanistan is being hailed as a hero for helping scores of people escape from an Orlando nightclub targeted by a terrorist. When Imran Yousuf, a bouncer at the Pulse nightclub, heard the gunfire break out early Sunday morning, he told CBS News that recognized it immediately. | Marine Corps Times >>

When she moved to Afghanistan one year after the fall of the Taliban after a childhood in Iran, Forough was well aware she had already overcome many challenges to get an education – and would face many more as she looked for a job. | The Huffington Post >>

The U.S. military used Apache helicopter gunships for the first time in the war against ISIS Monday in northern Iraq when one of the U.S. Army helicopters fired a hellfire missile at an ISIS armored vehicle rigged with explosives, a senior defense official told Fox News. | Fox News >>

Pakistan closed its main border crossing with Afghanistan and imposed a de facto curfew Monday after overnight clashes, including an exchange of gunfire, between the countries’ border security forces. | Los Angeles Times >>

A database that hosts files from the Air Force’s inspector general and legislative liaison divisions became corrupted last month, destroying data created between 2004 and now, service officials said. Neither the Air Force nor Lockheed Martin, the defense firm that runs the database, could say why it became corrupted or whether they’ll be able to recover the information. | Defense One >>

Today there is no shortage of reports concerning the 500 pilot shortage the U.S. Air Force is facing. An issue for several years, it’s expected to get even worse. March 2015 Senate Armed Services committee testimony by senior Air Force leadership explained that “the shortfall evolved from force structure reductions that cut active duty fighter squadrons and fighter training squadrons to a number that cannot sustain billet requirements. As a result, the Air Force is currently unable to produce and experience the required number of fighter pilots across the total force.” | Task and Purpose >>

The Senate approved the National Defense Authorization Act 85-13, but some Republicans voted against it because it contained the requirement to register women with the Selective Service System. The proposal was not considered on the Senate floor, since it was included in the bill that emerged from the Armed Services Committee. | Politico >>

This is performance art. The ice represents the stories veterans carry. It’s part of a $201,000 project funded by the National Endowment for the Humanities using art to help veterans ease the burdens of war they carry. “It helps to share the burden. You tell somebody the story, they sort of have to carry that with them now,” he said. “It makes it easier, lightens the load.” | Minnesota Public Radio >>

Richard Delgado Jr. spent 10 years serving his country in the United States Marine Corps. Even though he’s no longer in uniform, he has never stopped serving. As the Director of Military Community Development at Texas A&M University-San Antonio, Delgado helps veterans and their families transition to civilian life and achieve their goals. | People Magazine >>

“We thought combat was the hardest things we would ever have to do. The amount of horrific things you see, you question your moral compass,” he said. “But coming home was the hardest.” Lopez joined in 2003, became a rifleman and was deployed to Iraq and Afghanistan. He described to me the surreal and horrifying experience of being blown up by an improvised explosive device (IED), for which he was awarded the Purple Heart. Their searing real-life accounts are scenarios the majority of us are unable to fathom. | Discover San Diego >>