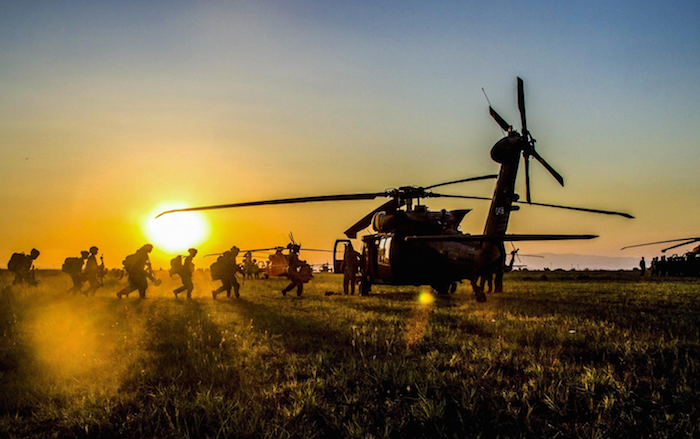 “This is backward, harmful and contrary to American values. It’s also bad for national security,” said Paul Rieckhoff, the group’s founder. “Thousands of transgender troops are serving in our military right now. An unknown number are in combat zones today.” | The New York Times >>

Wait times for medical appointments at veterans facilities in eastern Colorado and the Denver area are among the worst in the nation, U.S. Department of Veterans Affairs data show. Front Range veterans have seen little improvement in the three years since a national scandal erupted over the problem. | Denver Post >>

As people return home to Mosul and other areas of northern Iraq freed from Islamic State, homemade bombs and explosives laid on an industrial scale by the insurgents are claiming hundreds of victims and hampering efforts to bring life back to normal. | Reuters >>

President Trump, searching for a reason to keep the United States in Afghanistan after 16 years of war, has latched on to a prospect that tantalized previous administrations: Afghanistan’s vast mineral wealth, which his advisers and Afghan officials have told him could be profitably extracted by Western companies. | The New York Times >>

Iraq is bidding to make its first independent return to the capital markets in more than a decade, canvassing investors’ interest in a five-year bond after successfully launching a US-backed $1bn fundraising earlier this year. The oil-rich but war-ravaged Middle Eastern country has appointed three banks as bookrunners and will be meeting with prospective investors in the coming days. | Financial Times >>

As the Coast Guard continues to push for funding to modernize an aging fleet and handle a lack of personnel, a government watchdog agency is calling attention to the service’s serious need for strategic planning. | Defense News >>

The United States has continued to support Georgia in building more resilient military forces, training and equipping its army, Georgian president Giorgi Margvelashvili said on Thursday.He added that these issues would be “one of the main” topics discussed during U.S. Vice President Mike Pence’s visit to the ex-Soviet country. | Reuters >>

“The Navy taught me how people can come together and work hard to achieve something bigger than themselves,” said Petty Officer Kerry, 24, who is training to operate nuclear reactors and soon plans to adopt the name Eva. “Strangely enough, I think what the Navy taught us about integrity was what gave me the courage to come out. I had to be honest about who I was with myself and the people I served with.” | The New York Times >>

Hundreds of people in Michigan came together to salute and say a tear-filled final goodbye to a cancer-stricken dog who served three tours in Afghanistan with the U.S. Marines. Cena the black lab received a hero’s farewell Wednesday before being euthanized at a museum ship in Muskegon and carried off in a flag-draped coffin. | Associated Press >>

Craig Meriwether had only just arrived at his first drill with the Army reserves in September 1990 when he learned the news that permanently altered the course of his life. In three days, he’d leave behind his wife and kids – as young as three months old – to ship across the globe to the Gulf War. | Concord Monitor >>