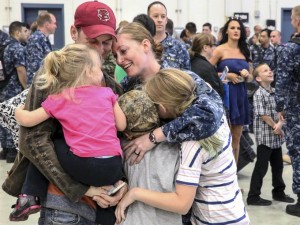 “The civilian military divide is still there. The needle has not moved, even though there have been tremendous efforts in this country in the past five years. But the work hasn’t been enough and it really is going to take public, private and nonprofit partnerships to build a national system of high-quality care and services [for veterans],” Army Col. Miguel Howe said earlier this month, Military Times reported Monday. | The Washington Times >>

Among those updates was a description of the “12 breakthrough priorities” the VA has established as goals for this year. The Department of Veterans Affairs is continuing to work toward improving patient care after the 2014 scandal which found thousands of veterans were not receiving care due to long wait times at VA hospitals, the three officials said. | The Herald Dispatch >>

“If we retreat on security or the economy behind an imaginary wall, we will have lost our leadership, our purpose, our chance to prevail in the 21st century,” Clinton told the crowd of veteran leaders, without ever mentioning Donald Trump’s name. “If America doesn’t lead, we will leave behind a vacuum.”| Military Times >>

The U.N. mission in Afghanistan on Monday reported a worrying increase in the number of civilians killed and wounded in the country this year, making it likely that 2016 will be the worst year since 2009, when the organization began keeping track. | The Washington Post >>

The Islamic State’s latest suicide attack in Baghdad, which killed nearly 330 people, foreshadows a long and bloody insurgency, according to American diplomats and commanders, as the group reverts to its guerrilla roots because its territory is shrinking in Iraq and Syria. | The New York Times >>

“We don’t believe that we are seeing them spread right now,” Brig. Gen. Charles H. Cleveland told reporters at NATO headquarters. “A suicide bomb against a bunch of frankly defenseless citizens really does gain an awful lot of attention for them, and it gives the perception of insecurity, but it doesn’t mean they’re stronger.” | Stars and Stripes >>

Two female Army officers have been selected to enter the training pipeline to join all-male Special Forces units, becoming the first soldiers to do so since Defense Secretary Ashton B. Carter rescinded a ban that banned women from ground combat assignments. | The Washington Post >>

Traveling underwater offers Navy SEALs a lot of advantages. Troops are hard to see below the waves, and until they reach the shore they’re no louder than the ocean itself. The problem is all the water. The current “swimmer delivery vehicles” used by the Navy’s elite special forces require them to wear scuba gear the entire time, because they’re exposed to the sea itself. A new submarine, from Submergence Group LLC and defense giant Lockheed Martin, will instead carry SEALS covertly, underwater, and inside an enclosed submarine. | Popular Science >>

The job to acquire, maintain and modernize more than 2,000 aircraft lands on the Fighters and Bombers Directorate at Wright-Patterson, a workforce of about 3,000 people across the country, said Brig. Gen. Michael J. Schmidt, who since April has been the directorate program executive officer. | Task and Purpose >>

“That’s one of the things that I wanted to do was earn or win that gold medal before I retired. I don’t know why, it’s just one of those goals that I wanted to do it while I was still on active duty. And it happened. It’s just like anything else in the military, you set your mind to it, you set a goal, and you’ve got to figure out how to get to that,” Hochstedler said. | KFOX14 >>

You ride 25 horses, each rider. There’s 40 of us this year. The event is put on by a group called The Adventurists out of Britain, but you get on a horse, you ride for 25 miles. Then you hop off a location that’s called an urtu. It’s basically a farm, where they have a bunch of new houses lined up. You pick a new horse, ride it for another 25 miles. Rinse and repeat.” | NPR >>

The community of Annapolis is taking a special opportunity to show their appreciation to those Service Members and Veterans that have been wounded in combat, injured outside of combat, or fallen ill during their time of service. For these military Service Members and Veterans, their injuries and medical conditions are not holding them back. For them, they are experiencing a new challenge, to learn the sport of sailing. | Eye on Annapolis >>