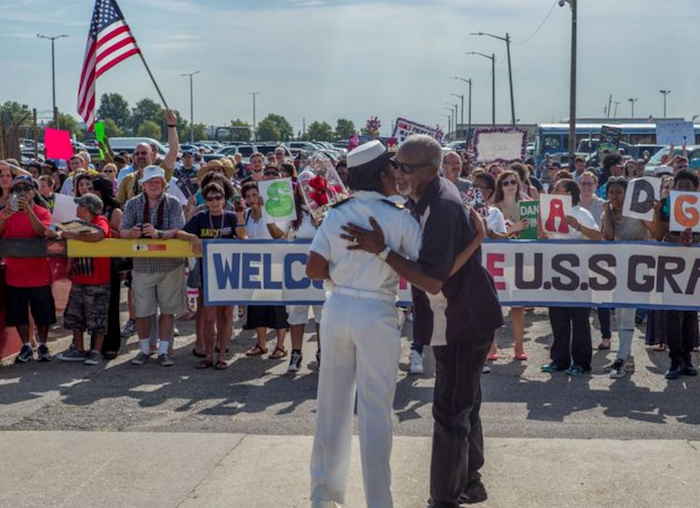 Gavin E. Long, a former Marine sergeant who served in the Corps from 2005 until 2010, was killed at the scene Sunday morning, less than a mile from police headquarters. The shootings began at a gas station just before 9 a.m. after Baton Rouge police answered a report of a man with an assault rifle and were met by gunfire. | Military Times >>

U.S. Rep. Tim Walz, a former command sergeant major in the Minnesota National Guard, has announced a bid to be the ranking member of the House Veterans’ Affairs Committee. The Mankato Democrat, who served 24 years in the Army National Guard, has served on the committee for nine years and unsuccessfully sought the ranking member position in 2014. | Mantanko Free Press >>

Brooks has applied multiple times for the special VA compensation reserved for atomic veterans. He was denied each time on the grounds that his pains and diseases are not among those that qualify. Many atomic vets feel, as Brooks does, abused, neglected and forgotten by the government and a country that exposed them to unforeseen risks. | The Oregonian >>

After prohibiting U.S. forces from targeting the Taliban except in limited circumstances beginning in 2015, Obama shifted course last month and said Nicholson could use U.S. airpower and other military assets against the Taliban if it supported offensive Afghan action as part of a strategic campaign plan. | Military Times >>

A wetland in southeast Iraq, thought to be the biblical Garden of Eden and almost completely drained during Saddam Hussein’s rule, has become a UNESCO world heritage site, Iraqi authorities said on Sunday. Fed by the Tigris and Euphrates rivers, the marshlands of Mesopotamia are spawning grounds for Gulf fisheries and home to bird species such as the sacred ibis. They also provide a resting spot for thousands of wildfowl migrating between Siberia and Africa. | Reuters >>

Five more combat helicopters were delivered by the United States to the Afghan Air Force in a bid to improve the capabilities of the Afghan National Defence and Security Forces (ANDSF). The helicopters are capable of firing rockets or .50-caliber machine guns. | Business Standard >>

“The minute I declare initial operational capability, if the combatant commander called me up and said, ‘We need F-35s,’ I would send them,” Carlisle told reporters on Capitol Hill Wednesday. | Air Force Times >>

A federal appeals court ruled Friday that the U.S. Navy was wrongly allowed to use sonar that could harm whales and other marine life. The Ninth U.S. Circuit Court of Appeals reversed a lower court decision upholding approval granted in 2012 for the Navy to use low-frequency sonar for training, testing and routine operations. | ABC News >>

The Air Force Reserve has been pulling out all the stops to retain the best and the brightest and to keep its end strength of 69,000 airmen. In recent years, the Air Force has been using the Guard and Reserve to bring in civilians for hot career fields, including cyber, intelligence, pilots and engineers. | Air Force Times >>

This week disabled veterans will attend a unique boot camp at Texas A&M. The training will help them build their own businesses. For one week, 16 military vets from across the country are in College Station for a special boot camp: The Entrepreneurship Boot Camp for Veterans with Disabilities. | KBTX >>

Reserve 1st Lt. Deshauna Barber may have made Miss USA pageant history by becoming the first service member to hold the title but she’s determined to not let any one role define her. After going through Virginia State University’s ROTC program, Barber was commissioned as a second lieutenant to the 1015th Quartermaster Company in 2011. | Army Times >>

A handful of volunteers, military veterans and civilians lined the banks of Clay Pit 1 at Fort Gordon to fly-fish Friday, and their fly lines could be seen whirring and buzzing through the air. Veterans Ryan Miller and Joel Saddoris even took it a little further and waded out into the waters, stocked with bream, bass and catfish. | The Columbia County News Times >>