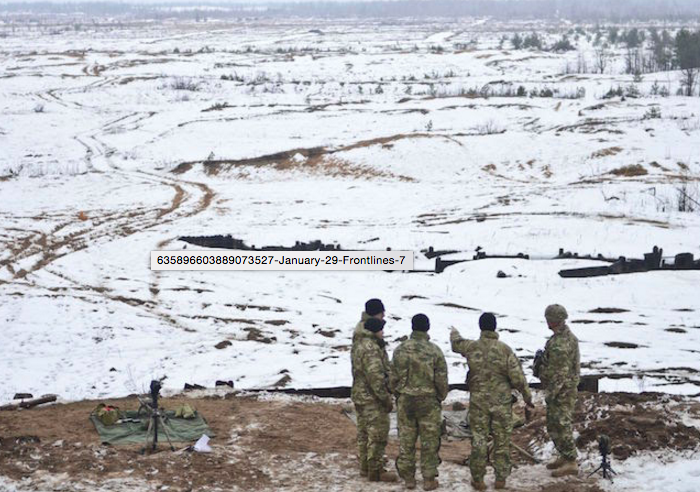 Soldiers of Headquarters and Headquarters Troop, 3rd Squadron, 2nd Cavalry Regiment, stationed out of Vilseck, Germany, overlook the terrain of the sniper range and identify the enemy targets, some as far as 900 meters away, during a field training exercise at Adazi Training Center in Latvia. | Military Times >>

VA electronic claims system melts backlog, but costs alarm Congress
Over the past five years, since Republicans won back control of the House, the Department of Veteran Affairs has been flogged publicly many times, often for allowing a mountain of backlogged disability compensation claims. As the backlog fell, lawmakers now are learning, they should have paid more attention to how much VA was spending on its primary tool for the task — a paperless claim system. They’re paying attention now. | Stars and Stripes >>

For-Profit Colleges Seeking Veterans’ GI Bill Dollars Aren’t Always The Best Fit
More than 1 million veterans and their families are taking advantage of the Post-9/11 GI Bill to attend college. But thousands are still attracted to for-profit schools. Are they aiming high enough? Are for-profits really the best fit for those who served? | NPR >>

Pentagon tells White House: More troops in Iraq, Syria needed to fight ISIS
Hundreds of additional forces including trainers, advisers and commandos are needed in the fight against the Islamic State, Pentagon top brass has conceded, prompting Department of Defense officials to urge the White House to approve further deployments to Iraq and Syria in the coming weeks. | Washington Times >>

America’s 14-year project to defeat the Taliban and build a stable Afghanistan is teetering on the brink of failure, according to a sobering report Friday by a government watchdog. The Taliban controls more of the country than at any time since U.S. troops invaded in 2001, notes the quarterly report to Congress by the Special Inspector General for Afghanistan Reconstruction. | NBC News >>

An Afghan official says at least three members of the security forces have been killed when a roadside bomb exploded near their vehicle in eastern Afghanistan. Gen. Abdul Habib Sayedkhaili, the Kunar provincial police chief, said on Saturday the dead include the police chief and intelligence chief of Sarkano district. | AP >>

Fifteen years into the war that few Americans talk about any more, conditions in Afghanistan are getting worse, preventing the clean ending that President Obama hoped to impose before leaving office. Violence is on the rise, the Taliban are staging new offensives, the Islamic State group is angling for a foothold and peace prospects are dim. | AP >>

Five civilians were killed and eight wounded during U.S-coalition air strikes targeting Islamic State militants in Iraq and Syria betweenJuly 27 and Oct. 15, the coalition leading the military operations said in a statement on Friday. | Reuters >>

Human Rights Watch said Sunday that powerful Iraqi Shiite militias were behind revenge attacks against Sunnis earlier this month that erupted after the Islamic State group bombed a cafe frequented by militiamen. | AP >>

The Defense Department on Friday released the name of a 1st Infantry Division soldier who died in a rollover accident in Iraq. Sgt. Joseph Stifter, 30, died Thursday at Al Asad Airbase in Iraq’s Anbar province, according to the DoD announcement released Friday. Stifter died from wounds suffered when his armored Humvee was involved in a rollover. The incident is under investigation. | Army Times >>

A US Army force of 980,000 is “minimally sufficient” for maintaining national security and the National Guard should keep some attack helicopters, the National Commission on the Future of the Army declared in a new report. | Defense News >>

Marine Corps and industry officials on Jan. 28 unveiled an upgraded Assault Amphibious Vehicle that promises to add 20 years of service to the aging AAVs. The Corps will put the upgraded hog to the test throughout 2016. | Marine Corps Times >>

The Navy challenged China and other countries’ “excessive” attempts to restrict navigation in the South China Sea on Saturday, sailing the guided missile destroyer USS Curtis Wilbur near disputed islands there, according to the Pentagon. | USA Today >>

Sgt. First Class Cedric King was a month removed from a coma when he first addressed the Carolina Panthers in November 2012. The Panthers had a 1-6 record. A little more than three years later, they’re both going to the Super Bowl — the Panthers as NFC champions, King as a fan and inspiration. | ESPN >>

For the second straight year, Reno resident and decorated war veteran Sgt. Thomas “Trey” Humphrey will compete in X Games Aspen. Humphrey is one of eight racers in the Mono Skier X event. Semifinal races will be held Saturday at 10 a.m. with the final being held immediately after. The races will be televised live on ABC. | Reno Gazette-Journal >>

Jeremy Hogan has a history of helping fellow Marines.  In his spare time, he makes American flags out of wood and gifts them to fellow soldiers and veterans. And now he’s a man on a mission. A mission to help a fellow brother. A man he has just met Thursdaybut one he shares an immediate bond with. | WBRC >>

On Thursday night, the candidates at the seventh GOP presidential debate talked a little about veterans, frontrunner Donald Trump claimed to raise millions for veterans at a separate event and veterans advocates labeled the whole situation an upsetting mess. | Military Times >>

Defense Secretary Ashton B. Carter has decided not to impose any further punishment on David H. Petraeus, the former CIA director and retired Army general who was forced to resign in a sex-and-secrets scandal in 2012. | Washington Post >>

Gov. Mike Pence’s focus on a plan to certify veteran-owned businesses isn’t enough response to reports that Indiana is lacking in services for former members of the military, four of the state’s largest veterans’ organizations said Friday. | AP >>