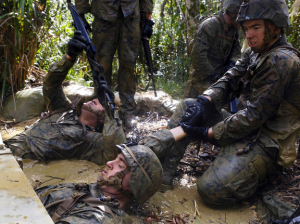 Marine Corps Lance Cpl. Jonathon E. Goff, right, pulls Marines in his squad through an obstacle during the endurance course at the Jungle Warfare Training Center on Camp Gonsalves in Okinawa, Japan, on Nov. 25. Military Times >>

TODAY’S TOP STORIES
NDAA Hits Troops’ Pay, Housing Allowances
Troops will see a 1 percent pay raise, slowed growth in their housing allowance and a $3 increase in most prescription co-pays as part of a military budget deal expected to be finalized this week. Military Times >>

Pentagon rushes new transport isolation units for Ebola
The Pentagon is rushing the development of an isolation system for U.S. troops who may have been infected by or exposed to Ebola while stationed in West Africa to treat the more than 15,000 people with the virus, a newly released Pentagon document shows. USA Today >>

AFGHANISTAN
NATO foreign ministers agreed on Tuesday to launch a new training mission for Afghanistan next year, replacing combat troops who pull out by the end of the year after 13 years of war. Reuters >>

While most deployed Fort Bragg soldiers will be home for Christmas, not all of them will be able to avoid another holiday in Afghanistan. Fayetteville Observer >> 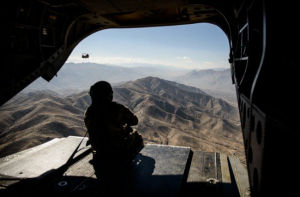 A soldier attached to the 82nd Combat Aviation Brigade sits on the tail of a CH-47 Chinook helicopter on a flight to Bagram Airfield in Afghanistan. Fayetteville Observer >>

A surprise reunion following a year-long separation from loved ones can overwhelm even the most disciplined, battle-hardened Marine with emotion. Gunnery Sgt. Chris Taylor recently returned from a year-long deployment in Afghanistan, and didn’t expect to see any family members at his homecoming. TODAY Show >>

The U.S.-led coalition has inflicted serious damage on Islamic State, carrying out around 1,000 air strikes so far in Iraq and Syria, but the fight against the militants could last years, U.S. Secretary of State John Kerry said on Wednesday. Reuters >>

The Iraqi government agreed Tuesday to a long-term accord with the autonomous Kurdish region to share the country’s oil wealth and military resources in a far-reaching deal that helps reunite the country in the face of a bitter war with Islamic extremists. New York Times >>

MILITARY AFFAIRS
The Federal Bureau of Investigation issued a warning to U.S. military members about ISIS using social media to target them for attacks. Medal of Honor recipient Dakota Meyer has some unique thoughts on the matter…Scout.com >>

In the wake of the suicide of Kosta Karageorge, an Ohio State University football player who allegedly suffered from debilitating concussions, questions once again have been raised about the link between brain injury and mental instability. NBCNews.com >>

A disparate group of senators took to the podium Tuesday to support a renewed push by Sen. Kirsten Gillibrand, D-N.Y., to overhaul the military’s legal procedures regarding sexual assault. Military Times >>

The Missouri National Guard has already begun to reduce its footprint in the St. Louis region, though troops remain in Ferguson, according to state officials. Wall Street Journal >>

NEW GREATEST GENERATION
Actor and comedian Rob Riggle is one of the funniest men on film and television. He’s in everything these days; from 22 Jump Street to Dumb and Dumber To, and even has a regular appearance on Fox NFL Sunday. Many know Riggle from his early days on Saturday Night Live or as a correspondent on Comedy Central’s Daily Show with Jon Stewart, but Riggle’s career actually began somewhere far less conventional. Task and Purpose >>

The first movie trailer for the heavily anticipated “Star Wars: The Force Awakens” premiered online Friday, bringing with it immediate buzz about a new kind of lightsaber, a potential deserter stormtrooper and a revamped Millennium Falcon spaceship. Washington Post >> 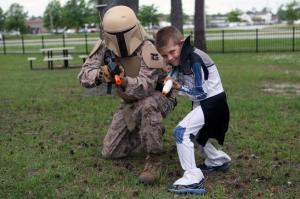 Marines and their children dressed as their favorite characters during “Star Wars” Day at the Harriotte B. Smith Library aboard Marine Corps Base Camp Lejeune, N.C., on May 4, 2013. Washington Post >>

Sgt. Alex Kinley surprised her kids at the airport with an early arrival just in time for Thanksgiving. WTVM reports. CNN >>

As Americans give thanks, there is one group of women they especially need to remember over the holidays: the Mighty Moms of Walter Reed. They pick up the pieces when their children return from war. Fox News >>

INSIDE WASHINGTON
President Obama may have picked a new defense secretary, but an older and thornier problem remains: The commander in chief, who publicly committed to ending America’s two wars, must find ways to inspire the men and women he continues to send into battle. Washington Post >>

CNN has learned the White House wanted Defense Secretary Chuck Hagel to wait until this week to resign, so it would have a new nominee in place by then. But Hagel refused to wait, deciding if the White House was going to push him out, he wanted to make his resignation known as quickly as possible. CNN >>

President Barack Obama’s expected nomination of Ashton Carter to become the next defense secretary would give the Pentagon a strong, top tier team steeped in business, acquisition and budget issues. Defense One >>

Sen. John McCain (R-Ariz.) is pressing the Justice Department to wrap up its two-year investigation into former CIA Director David Petraeus. The Hill >>