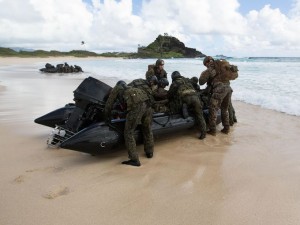 The number of homeless veterans nationwide dropped dramatically last year, but advocates say the U.S. remains far from the White House’s stated goal of completely ending the problem. According to estimates announced by federal officials Monday, fewer than 40,000 homeless veterans remained on the streets at the start of this year, down about 8,000 individuals from the same time in 2015. | Military Times >>

A coalition of military support and advocacy groups took what they called an unprecedented step Monday, collectively defending the family of a Muslim American Army officer killed in Iraq from criticism by Republican presidential candidate Donald J. Trump. | The Washington Post >>

Democratic and Republican leaders finalized their party platforms at their respective conventions in July, outlining a broad set of goals for handling national defense, Veterans Affairs reform and maintaining service members’ morale. Both parties call for a stronger military. Both promise to defeat terrorism abroad and target Islamic State fighters in the Middle East. Both pledge to overhaul veterans’ healthcare programs. | Military Times >>

A Taliban truck bomb exploded outside a protected hotel compound used by foreign service contractors in Kabul on Monday, ripping a deep crater in the ground and leaving a tangle of wreckage but causing few casualties. The loud blast was heard around Kabul at about 1.30 a.m. (2100 GMT on Sunday) and electricity was cut off in many areas, heightening uncertainty in a city on edge after a suicide attack a week earlier that killed at least 80 people. | Reuters >>

U.S. military leaders are insisting that ISIS’s Afghan branch is not strengthening, despite an attack in Kabul last week that left 80 people dead and wounded more than 200. The attack attributed to the Islamic State in Iraq and Syria targeted a peaceful protest of Afghanistan’s mainly Shiite Hazaras minority, who were asking the government to put a power line in provinces with large Hazara populations. | The Hill >>

The United Nations said on Monday Iraqi government efforts to speed up execution of Islamic State militants following a Baghdad bomb attack that killed 324 people could result in innocent people being put to death. “(It is) all too easy to permit such atrocities to stoke the fires of vengeance.” | Business Insider >>

The U.S. Air Force revealed new 360-degree footage of a U-2 airplane pilot’s perspective from takeoff to the edge of Earth’s atmosphere on Monday. The reconnaissance aircraft was an iconic aircraft during the Cold War for high altitude surveillance of Russia. Now, the U-2 remains an essential part of national security. | CBS News >>

Holcomb is coming to Fort Detrick as the first nurse to serve as commander of the medical command, according to spokeswoman Chelsea Bauckman. Holcomb previously served as a deputy commanding general at the U.S. Army Medical Command at Joint Base San Antonio. | Task and Purpose >>

As of July 27, in the continental United States and Hawaii, 1,658 cases of Zika have been reported to CDC, with the majority, 1,642, contracted through exposure to mosquitoes outside the United States. Fifteen cases are thought to have been sexually transmitted and one was the result of a laboratory exposure. | Military Times >>

The Tigers Display team have swapped their usual freefall routines to help first time sky divers complete a charity tandem jump. In 2012 the platoon that Private Adam Francis was travelling with in Afghanistan was attacked by the Taliban. His Jackal was hit by a roadside bomb and resulted in Private Francis suffering a double below knee amputation. | Forces TV >>

After the teacher was alerted, a TV was brought in and they began watching coverage of the events that were unfolding in New York, the District of Columbia and Pennsylvania. Like all Americans that day, he said they watched in shock and disbelief. “When 9/11 happened, that was my call,” Downs said. | The Post Star >>

The medically retired Air Force chief master sergeant set a U.S. record with his 8.81-meter throw at the 2016 Paralympic team trials in Charlotte, N.C., but the distance was not long enough to make him competitive in the field of international throwers. | Pensacola News Journal >>