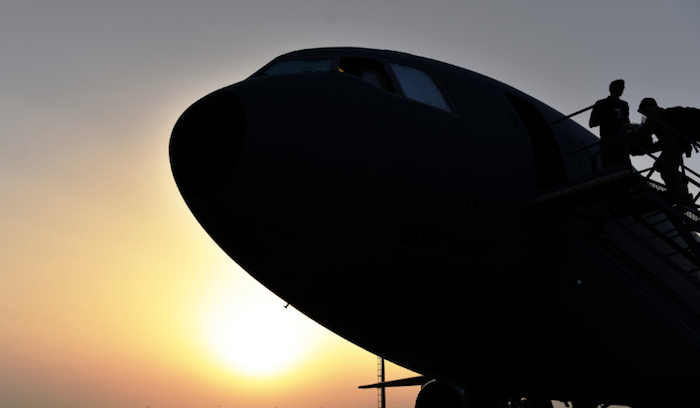 Paul Rieckhoff, CEO of Iraq and Afghanistan Veterans of America, offered similar frustration with the proposal. He said his group will strong fight any “tax” on troops to pay for education benefits, and said he doubts there is much support in the public for such a plan. “Pushing this GI Bill tax proposal on troops in a time of war is political cowardice,” he said. | Military Times >>

Some ailing veterans can now use their federal health care benefits at CVS “MinuteClinics” to treat minor illnesses and injuries, under a pilot program announced Tuesday by the Department of Veterans Affairs. The new program, currently limited to the Phoenix area, comes three years after the VA faced allegations of chronically long wait times at its centers, including its Phoenix facility, which treats about 120,000 veterans. | PBS >>

In a statement, VA Secretary David Shulkin said the move is needed “to ensure we honor our commitment to enhance the health and well-being of veterans.” The review will include a look at whether rules governing the program are being evaluated consistently, and whether officials are taking proper steps to explain changes to beneficiaries. | Military Times >>

Iraqi’s army has built a new pontoon bridge over the Tigris river south of Mosul, after flooding had blocked all crossing points, opening an escape route for families fleeing fighting between government forces and Islamic State. On Friday, the army dismantled makeshift bridges linking the two parts of Mosul due to heavy rain, forcing residents leaving Iraq’s second-largest city to use small boats. | US News and World Report >>

Near the blast site of the “Mother of All Bombs,” U.S. and Afghan forces are trying to dislodge Islamic State from a mountain stronghold where the militant group recently established a new front. Afghan commandos and U.S. Special Forces clustered with their armored vehicles on Monday by a rive at the foot of the Spingar Mountains, less than a mile from where the powerful U.S. bomb struck last week. | The Wall Street Journal >>

But ISIS is being forced to face off various attacks from multiple factions in Syria, as well. After losing large swathes of the country to ISIS and opposition groups, the Syrian government has since reestablished control over virtually every major population center in Syria thanks a series of lightening offenses supported by Russian warplanes. In March, the Syrian army managed to oust ISIS from the historic city of Palmyra for the second time. While ISIS still controls significant stretches of central and eastern Syria, this land is sparsely populated and largely barren, making it difficult to hold without vital connections to resources and markets. | Newsweek >>

“The Navy’s impending fiscal year 2018 budget request presents a key opportunity for Congress to affect the way forward for the frigate program by ensuring the Navy possesses sufficient knowledge on cost, design and capability before authorizing” the investment, the watchdog agency said in the report. Authorizing the money isn’t justified yet because the program has “no current formal cost estimate – independent or otherwise,” will not “have begun key detail design activities” and “has significant unknowns in regards to operational performance.” | Bloomberg >>

The Marine Corps is axing some online courses and adding more face-to-face training, according to an early copy of an internal message obtained by Stars and Stripes. The cuts, which include seven classes representing five hours of annual training, take effect May 1, the message said. | Stars and Stripes >>

The Pentagon’s approval for the Marine Corps to start buying Lockheed Martin’s new heavy lift helicopter came with a hidden surprise: the projected total acquisition cost for the King Stallion program has increased 6.9 percent to $31 billion. The updated estimate was provided in an April 4 decision memo by James MacStravic, the Pentagon’s acting weapons buyer, that authorized production of the initial batch of 26 helicopters. The memo, labeled “For Official Use Only,” was obtained by Bloomberg News. | The Denver Post >>

Roessner came from a military family and knew he could serve a few years for education benefits, but he was also interested in creating the story of a life. He spoke with an Army recruiter in Ohio who offered an exaggerated claim of how much money he’d receive in GI Bill benefits to pay for film school. It sounded low risk, and he enlisted in the summer of 2001, when his filmmaking ambitions and an Army life were two distinct pursuits, he said. | Stars and Stripes >>

For Staff Sgt. Jose Luis Sanchez, what it means to serve and represent his country is something he knows all too well. According to NBC, Sanchez is a retired Marine who lost the lower part of his left leg by stepping on an IED in Afghanistan in 2011. However, the former military man would not be deterred because of his injury when it came time to run in the 2017 Boston Marathon. | ESPN >>

Lisa Patterson, director of the Vet Center in Merrillville, a Veterans Administration office, said veterans should take advantage of service organizations and VA offices like hers to ensure they are receiving the benefits to which they are entitled. She said many veterans will go their whole lives without realizing they may qualify for certain benefits and the service officers at organizations like these help make those connections. | The Chicago Tribune >>