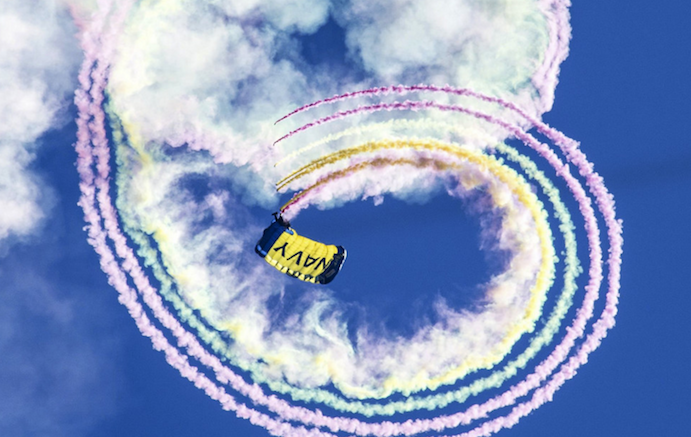 “Early intervention can lead to better recovery outcomes, lessen the likelihood of challenges becoming crises and reduce the stress that veterans and their loved one face,” said Dr. Caitlin Thompson, national director of the VA’s Office forSuicide Prevention. | Military Times >>

In conjunction with other federal programs, law enforcement agencies could get as much as $25,000 in federal money for hiring veterans and could be eligible for additional money for academy and field training, supplemental community policing training, uniforms and basic training. Officials pointed out that veterans’ experience and skills make them highly sought after by police recruiters. | The Star Telegram >>

The chairman of the House Committee on Veterans Affairs will be in the Valley on Tuesday to tour the Phoenix VA health care center. Dr. Phil Roe, R-Tenn., will be joined by U.S. Rep. Kyrsten Sinema, D-Ariz. They plan to meet with hospital leaders, caregivers and patients to monitor progress made on ensuring that veterans receive timely care. | KJZZ >>

The Iraqi military says the Islamic State group has lost more than three-fourths of the territory it seized when it swept across the country in the summer of 2014. Brig. Gen. Yahya Rasool, a military spokesman, says the extremist group currently controls less than 30,000 square kilometers (12,000 sq . miles) in Iraq, or 6.8 percent of the country’s territory, down from more than 40 percent at its height. | Fox News >>

The soldier killed fighting the Islamic State offshoot in Afghanistan over the weekend was identified Monday by the Pentagon. Army Staff Sgt. Mark R. De Alencar, 37, was mortally wounded by small arms fire during an operation Saturday in the eastern province of Nangahar, the Pentagon said in a news release. De Alencar, originally from Edgewood, Md., was assigned to the 1st Battalion of the 7th Special Forces Group based out of Florida. | The Washington Post >>

The number of casualties is hard to establish because only some of the wounded reach hospitals and most of the dead are buried immediately. At least 300 people were killed in western Mosul up to the beginning of April, according to the U.N. The World Health Organization says 1,683 wounded civilians were referred to hospitals between February 18 and April 8. Johannes Schad, a doctor in West Irbil Emergency Hospital, said that about 60 percent of the victims have blast injuries, mostly from shelling. | ABC News >>

Pilots are leaving the U.S. Air Force faster than they can be replaced, and officials are considering a drastic solution: forcing the pilots to stay against their will. “If I don’t have pilots to fly, the enemy has a vote, and if I can’t put warheads on foreheads, then [ISIS] is winning,” Gen. Carlton Everhart, the chief of Air Mobility Command, told Roll Call. | Vice News >>

The selection of Brig. Gen.(S) Fisher-Goodwin as the next Commandant of the U.S. Air Force Academy, as well as the advancement of the four other women who were recognised that day, demonstrate there are many enlightened and thoughtful senior leaders in this service. I would submit Kristin’s promotion and nomination. like the other four women, was based solely on merit and had nothing to do with either their gender, or in Kristin’s case, her sexual orientation. Simply put, she is the best person for this very important leadership position at the Academy. | The Huffington Post >>

“There may be a good reason for the price, but based on us taking apart the cable and researching the individual parts, we’ve found no reason for this part to cost as much as it does,” he said. It turned out he was right. Following an investigation in response to questions from Stars and Stripes, Barb Hamby of Marine Corps Systems Command said the cord should have been priced at about $4,000. | Military.com >>

A former Ohio man who a brother says survived explosions and battles as a U.S. Army combat engineer in Iraq and Afghanistan has drowned while saving a 6-year-old boy during a missionary trip in Indonesia. | Stars and Stripes >>

After his graduation from Cornell in 1987, Chivers served as an infantry officer in the U.S. Marines until 1994. He served in the first Gulf War and in peacekeeping operations during the Los Angeles riots in 1992. He was honorably discharged as a captain. Then he studied journalism at Columbia. He came to the Journal in 1995, where he covered North Providence and Providence politics and in 1997 won a Livingston Award for International Reporting for a series on the collapse of commercial fishing in the North Atlantic.  | Rhode Island Public Radio >>

“This election evidences a loss of trust between our people and our government and a desire for new leadership and fresh perspectives,” he said Monday afternoon as his family’s cocker spaniel and English bull terrier padded around the patio of their Fairfax County home. “It’s important for America that we fix this.” | The Washington Post >>