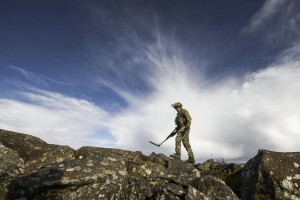 When Hal Dumas returned from deployment to Iraq, the signs of post-traumatic stress disorder were not immediately evident. And as they appeared, his wife, Kristi, felt isolated and helpless as she moved into a caregiver role. It was hard to get needed support, she said, especially because she didn’t really realize there were millions of other military caregivers who’d been thrust into the role without resources to know how to manage it. | Marine Corps Times >>

The Department of Veterans Affairs has been leasing medical facilities in recent years, rather than building its own, in order to stay flexible with changing health care needs. But the VA has failed to prove why leasing is worth the extra cost, said Rebecca Shea, an official with the U.S. Government Accountability Office, on Wednesday. | Stars and Stripes >>

Congress has rejected a veto by President Barack Obama for the first time since he became president. The House voted 348-77 Wednesday to override his veto of legislation and allow the families of Sept. 11 victims to sue Saudi Arabia for the kingdom’s alleged backing of the attackers. | The Boston Globe >>

Defense Secretary Ash Carter has announced that 615 additional American troops will head to Iraq to assist the country’s military in its future offensive to re-take Mosul from ISIS. Currently, the United States has 4,565 military personnel in Iraq who are training, advising and assisting Iraq’s military in the fight against ISIS. | ABC News >>

At least 13 people were killed by an airstrike in the eastern Afghan province of Nangarhar on Wednesday, with officials describing the victims as members of the Islamic State, while some residents claimed the dead were civilians. | The New York Times >>

Iraq is carrying out a mediation between Saudi Arabia and Iran to bring about an agreement that would lift crude prices, at a meeting of crude-producing nations in Algiers, Iraqi Oil Minister Jabar Ali al-Luaibi said on Tuesday. | Reuters >>

The U.S. Navy has launched an investigation into the case of a sailor who didn’t salute as the National Anthem played during a recent morning flag-raising at Pearl Harbor, an official said Tuesday. U.S. Pacific Fleet spokesman Senior Chief Petty Officer Joel Cesar said it’s up to the sailor’s commander whether she faces any punishment for failing to salute the flag on Sept. 19. | Fox News >>

The Air Force has asked Congress for $165.7 million to buy and convert a Gulfstream G550 into a Compass Call starting in 2017. (The service already has a small fleet of G550 business jets to fly senior Pentagon officials around the globe.) The request was not included in the Air Force’s 2017 budget request to Congress in February, but was submitted to lawmakers separately in a “technical adjustment” letter, according to a House report. | Defense One >>

Waging war in today’s complex world requires more than the ability to shoot straight or drop a bomb squarely on target. It means understanding the politics and culture that surround a battlefield. Criminal networks and shady characters can complicate a mission. Winning the war on Twitter and Facebook plays a role, too. | Military.com >>

In 2011, he was deployed to Afghanistan and placed on an elite bomb-disposal squad. On September 7, 2011 he was blinded when he stepped on a hidden improvised explosive device (IED) which exploded. | Forbes >>

Rob would talk about his past depression, his recent divorce, PTSD and suicidal ideation. Rob lost a brother in the Iraq War and is very active among war veteran communities. He wants this journey to inspire people to live in the moment and recognize how precious and wonderful being alive is.| Elite Daily >>

Colonel Gary West is no average man — he has served in the U.S. Air Force for 26 years, commanded at the Squadron and Group levels and was a F-15 Fighter Pilot. But he isn’t done fighting just yet. Now, West is in the midst of a 2,500-mile bike ride, spanning 16 states, to honor of fallen and disabled warriors. | WSVN >>