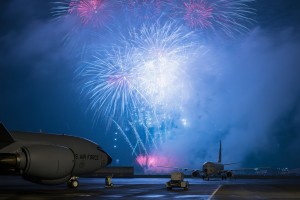 Speaking at the event Tuesday, VA Secretary Robert McDonald said that veterans often end up in the judicial system after suffering post-traumatic stress, brain injury or mental illness that can lead to substance abuse, homelessness and criminal activity. | Military Times >>

The problems plaguing the medical center first drew attention after all five of the hospital’s operating rooms were shut down in mid-February, because sand-grain-size black particles had begun falling from the air ducts. Veterans in need of surgery had to go to other hospitals for care, often leading to further delays in their treatment or postponed operations. | The New York Times >>

At least 30 minutes of the nationally televised event will focus on the security questions, expected to cover the candidates’ plans for the military budget, combating terrorism and America’s role in overseas conflicts. | Military Times >>

President Obama came face to face on Monday with the conundrum of his war against the Islamic State: Even as he claimed gains in retaking territory from the militants in Iraq, he had to steady nerves after a stabbing rampage inspired by them in the United States. | The New York Times >>

A committee has been appointed to lead the investigation, the ministry said in a statement. A spokesman said the names of the committee members were being withheld for security reasons, as they will be traveling to the embattled province of Uruzgan where the strikes occurred. | Stars and Stripes >>

Iraqi forces launched an operation on Tuesday to retake a northern town from the Islamic State group in the latest move to prepare a broad offensive on jihadist bastion Mosul. Army and tribal forces pushed towards Sherqat, which IS fighters captured more than two years ago when they swept across Iraq’s Sunni Arab heartland. | Yahoo News >>

Ten busloads of Army cadets attended funeral services Monday for teammate and classmate Brandon Jackson, the sophomore cornerback remembered for his uplifting smile, quiet confidence and for a life filled with “promise and purpose.” Hundreds gathered to mourn Jackson, killed in a single-car crash, at the Greater Allen A.M.E Cathedral in Jamaica, Queens, not far from the St. Albans neighborhood where Jackson grew up. | USA Today >>

Commack-based Bren-Tronics Inc. has won a contract worth as much as $38 million to supply military-grade battery chargers and adapters to the U.S. Marine Corps, the company announced Monday. | Newsday >>

“We all relate to each other, but we’re all different,” Staff Sgt. Melinda Smith, who has multiple sclerosis, said as she took a break from a wheelchair basketball scrimmage. “I enjoy the camaraderie. It’s the people, my wounded warrior family.” | The Lexington Clipper-Herald >>

“This wasn’t about raising awareness or funds,” Herzog said. “Sure, we did both of those things, but this was about making sure that everyone who attended had this community who would support him or her, and take suicide off the table when things get hard.” | TAP >>