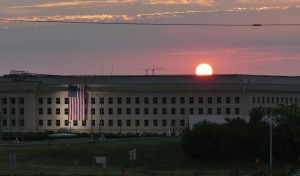 The 2016 election is just weeks away, after a whirlwind year, during which more than 20 candidates sought to serve in the highest office in the land. Now, we’ve narrowed it down to just two main candidates: Hillary Clinton and Donald Trump. The challenges and responsibilities imposed on the office of the presidency are enormous. The coming weeks will be devoted to debating which candidate has the experience, perspective, and vision to tackle them. | Task and Purpose >>

While the first presidential debate of the general election does not occur until September 26th, voters have already had their introduction to some of the arguments that will ensue. Both Hillary Clinton and Donald Trump occupied the same stage on the same evening last week—though at different times—to make their case for why they should serve as the next Commander-in-Chief for the United States. | Lima Charlie News >>

Legislation introduced Monday evening by two congressmen could pave the way for a national memorial honoring the veterans of America’s longest and most recent wars – the post-9/11 conflicts in Afghanistan and Iraq. | Stars and Stripes >>

Samim Khpalwak, a spokesman for the provincial governor of Kandahar, said the apparent target for the attack was the deputy governor who was intending to visit the hospital, a large regional facility that provides health services to war victims, including members of the army and police. | Reuters >>

The wars in Iraq and Afghanistan have cost U.S. taxpayers nearly $5 trillion dollars and counting, according to an independent analysis conducted by a political science professor at Brown University. | Stars and Stripes >>

Kathem Hussein fondly remembers the year that he made more than $4,000 on the Day of Arafah, the holiest day on the Muslim calendar. This year, Hussein, a street vendor of men’s shoes, expected no such windfall. | Los Angeles Times >>

The U.S. military’s growing alliance with the Philippines may be at risk after the Pacific nation’s president on Monday issued a stunning call for American troops to end their longstanding mission in the country’s southern region. | Military Times >>

The United States will conduct a bomber flight over South Korea on Tuesday, an official at U.S. Forces in Korea said, a show of force against North Korea after the reclusive state recently carried out its fifth nuclear test. | Reuters >>

A third class petty officer from Carrier Air Wing 3 checked into the carrier’s medical clinic after stomach pains Saturday. Nine hours later, in the early hours of Sept. 11, she gave birth to a healthy 7-pound baby girl, according to an internal memo on the incident obtained by Navy Times. | Navy Times >>

For 31 years the former pilot has been a fixture on campus, often clad in Hawaiian shirts and surrounded by students gleaning the STEM guru’s wisdom. | OU Daily >>

This past weekend, Marine veteran Ray Sumner brewed a Georgia Peach Ale at Flagship Brewing Co. There, in Tompkinsville, he’s doing his time as a 54-year-old intern, embarking on a third career in the beer industry. | Staten Island Live >>

“It’s a campaign to raise awareness about the signs and symptoms of invisible wounds of war, and the wounds you may be living with that are psychological,” Pulido said. “I will tell you that there’s a lot of service members that have experienced these silent wounds.” | West Virginia Metro News >>