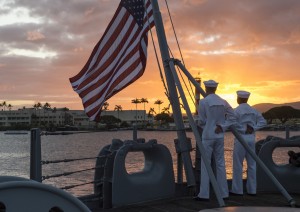 Sailors take down he flag aboard the USS Missouri during an official dinner on Sept. 30, 2016, attended by Secretary of Defense Ash Carter and ministers of the Association of Southeast Asian Nations (ASEAN) conference at Pearl Harbor, Hawaii. Tech. Sgt. Brigitte N. Brantley/Air Force. | Military Times >>

In an interview with The Hollywood Reporter, Rieckhoff was emphatic that his objectives are not political. “It’s a teachable moment for Mr. Trump and for America,” he said. “When political leaders talk about things like PTSD and suicide, they need to be responsible and precise. And unfortunately, Trump is not a precise person.” | The Hollywood Reporter >>

“We are proud to announce the shared goal of honoring our nation’s Veterans by expanding burial service to Veterans, their spouses and families in Idaho,” Interim Under Secretary for Memorial Affairs Ronald E. Walters said in a statement. “This national cemetery will help us reach Veterans in rural parts of Idaho who have not previously had reasonable access to a national or state Veterans cemetery.” | Times-News Magic Valley >>

The U.S. Department of Veterans Affairs, which has struggled to eliminate a backlog of disability claims, is planning to outsource more of the medical exams that are key to determining benefits. | The Baltimore Sun >>

Afghan officials said on Tuesday that their commando forces had reclaimed the main city square in Kunduz from the Taliban and were making gains elsewhere in the vital provincial capital, where the insurgents overran central neighborhoods on Monday. | The New York Times >>

Afghanistan is appealing to European donors to open their wallets at an international donors’ conference Wednesday, arguing that jobs created through development projects will help stem the tide of migrants that is destabilizing the European continent.| Voice of America >>

Iraq launched a radio station on Tuesday to help Mosul residents stay safe during the upcoming military offensive to dislodge Islamic State from the largest city under its control, state TV said. The radio will give instructions on possible safe exit routes, places to avoid, where to find assistance and emergency numbers to call during the offensive. | Reuters >>

The Army wants to gradually bring more autonomy, artificial intelligence and common control of unmanned systems into soldier formations over the course of 25 years, moving from having to keep constant vigilance over robotic systems to relationships where the unmanned move alongside a warfighter on a mission, much like a hunter and his bird dog. | Defense News >>

“We must be able to understand what can happen to our systems through a cyberattack, and what is the enemy’s capability and how do we counter that,” Gen. Gustave “Gus” Perna, commander of Army Materiel Command, told an audience at the Association the United States Army’s annual meeting in Washington, D.C | Military.com >>

Over the weekend, spouses, children and pets were flown by C-130s and C-17s to Naval Air Station Pensacola, Florida, deemed a safe haven as the Category 4 storm threatens the Navy’s installation on the island, said Capt. Jeff Davis, a Defense Department spokesman in a release. | Navy Times >>

He joined in 2004, between two vicious battles in Fallujah while an insurgency simmered in Afghanistan. He could have gone into water purification or finance or any number of jobs. But choosing combat arms in wartime takes a certain kind of soldier with a certain something to prove that cannot be done at home. | Task and Purpose >>

“This event is a good way to keep the memories alive and a chance for the community to say thank you for their service,” Dave Swenson said. “There’s a huge amount of support here. It’s a good day.” | Post Bulletin >>

Paralyzed and in need of help breathing, Camargo relied on his wife for everything from bathing to feeding. Unlike many military spouses faced with such situations, the former lawyer from Venezuela didn’t leave. She stayed with her wounded husband and came up with the idea for the new center after making two grueling trips a week to a similar location in Orlando. | Tampa Bay Times >>