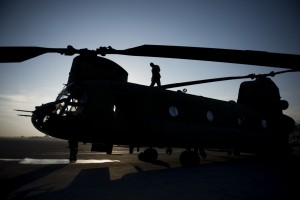 There are an estimated 21.6 million veterans in the United States. Among them, nearly 9 million are enrolled in health care provided by the Department of Veterans Affairs. About 4.3 million veterans get disability compensation from the VA and nearly 900,000 have been diagnosed with post-traumatic stress disorder. | PBS >>

Hector Barajas, an Army veteran deported to Mexico, and others like him have been working multiple political fronts to bring an end to the deportation of certain immigrant veterans, including taking their case to the 2016 presidential candidates and urging the president to take action. | NBC News >>

The programs could help as many as 2,000 veterans who sustained injuries in Iraq and Afghanistan that caused infertility or diminished their ability to parent children naturally. While Congress passed a bill last month that allows the Veterans Affairs Department to provide fertility services to these former troops, the legislation contained no money to fund the program and the VA is not required to provide the services under the legislation’s wording. | Military Times >>

Two Taliban officials said on Tuesday that the militant movement held informal, secret peace talks with the Afghan government earlier this month in Qatar, but a Taliban spokesman denied they took place. The Afghan Taliban officials, based in Qatar and the United Arab Emirates, speaking on condition of anonymity, said the talks had yielded little. | Reuters >>

Qayyarah Airbase, South of Mosul, Iraq — The American ground force commander in Iraq, Maj. Gen. Gary Volesky, said U.S.-backed Iraqi forces have momentum on their side in the battle to drive ISIS out of its Iraq stronghold, the northern city of Mosul. | NBC News >>

Thousands of soldiers have fallen gravely ill or even died from exposure to burn pits in Afghanistan and Iraq, but they are not the only ones who have gotten sick. Civilian workers and private contractors are also suffering maladies including cancer, respiratory problems and blood disorders and, like military victims, they say they are being ignored. | Fox News >>

The U.S. Army and Tufts University are working together to learn more about how people think and respond under stress. Their new cognitive sciences center officially opened Tuesday in Medford, Massachusetts. The research aims to help soldiers and civilian first responders, such as firefighters. | ABC News >>

The fight against breast cancer picked up a powerful new ally — a retired US Navy fighter jet. And of course, it’s pink. A Grumman F9F-8 Cougar, painted a vivid shade of pink called “Heliconia,” has been unveiled on the flight deck of the World War II aircraft carrier USS Lexington, anchored at Corpus Christi, Texas. | CNN >>

“I was one of those kids that always ran after the Humvees,” the 21-year-old laughed about growing up in Iraq’s second-largest city after the ousting of Saddam Hussein. “There were a lot of [American] military there — Army, Navy — but the Marines were different.” | Marine Corps Times >>

The agency is authorized 377 police officers, responsible for securing and policing its bases, but needs to recruit on a regular basis because of a high turnover rate as employees move on to other opportunities in police or government agencies, DLA police law enforcement manager Tim Gerald said in a phone interview this month. | Stars and Stripes >>

Any marathoner can tell you that training to run 26.2 miles can be mentally and physically exhausting. Runners plan months beforehand and stick to a strict exercise regimen, gradually increasing strength and stamina until the big day. But Samaria Hunter’s plans were suddenly interrupted two years ago, when doctors revealed she had been suffering from a life-threatening condition for more than a decade. | WTOP >>

There were only a hand full of Farmers Insurance agencies across the country that took part in the Suits for Soldiers drive last year during its first year, but after getting around 800 suits, it’s now a company-wide effort that will be extending to the Ken Himebaugh Farmers Insurance office in Moline. | WQAD >>