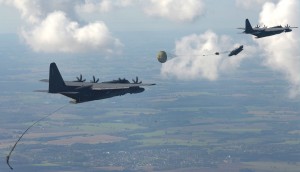 Defense officials are delaying the initial rollout of a new multibillion-dollar electronic health record system until early 2017, but insist the shift won’t hurt plans to field it throughout the military within six years or to share information with the Department of Veterans Affairs now. | Military Times >>

MVP is working to build one of the world’s largest databases using blood samples and health information from veteran volunteers. The data will be stored anonymously and used for research on diseases from cancer and diabetes to military-related illnesses like PTSD. | KTUL >>

If you’re a military veteran and looking for a job or considering a change, U.S. Customs and Border Protection may have a place for you. Today, its Norfolk office announced that it’s looking to hire officers to work in the port from the ranks of veterans living in the region. | Stars and Stripes >>

IS militants are said to have tried to use drones to launch attacks at least two other times in the past month. In response, US-led coalition and Iraqi pro-government forces have been warned to treat any type of small flying aircraft as a potential bomb, according to the New York Times. | BBC >>

Islamic State on Wednesday claimed responsibility for a mass shooting that killed at least 18 worshippers at a shrine in the Afghan capital, raising fears of sectarian violence after a string of attacks on the country’s Shi’ite minority. The claim to Tuesday’s attack, released online, came as the community observed Ashura, one of its holiest days, although commemorations have been subdued because of security fears. | Reuters >>

The leaders of Turkey and Iraq exchanged sharp words as they prepare for a military operation to oust Islamic State militants from the terror group’s last major redoubt in Iraq. | USA Today >>

The UH-1A “Iroquois” helicopter was the aerial workhorse of the Vietnam War. Originally designed to carry troops into combat, the helicopter, nicknamed “Huey”, became a battlefield jack-of-all-trades. One role the Huey became outfitted for was as a gunship—sporting rockets and machine guns—for providing close air support for ground troops. | Popular Mechanics >>

This fall, the Army will begin testing a new system designed to better measure a unit’s readiness to deploy. Called Objective T, the initiative originated from Army senior leaders who wanted to “put more rigor into how we assess our training levels across the entire Army,” said Brig. Gen. Patrick Matlock, the director of training in the Army G-3 (operations). | Army Times >>

The United States is seeing growing indications that Iran-allied Houthi rebels, despite denials, were responsible for Sunday’s attack on a Navy destroyer off the Yemen coast, U.S. officials told Reuters. The rebels appeared to use small skiffs as spotters to help direct a missile attack on the warship, said U.S. officials, who are not authorized to speak publicly because the investigation is ongoing. | Politico >>

“We would call him our therapy cat,” said King. “When you go to combat or go overseas you’re going to have lasting effects when you come back home, regardless of who you are… You can go over there and come back and have quite a big mental breakdown.” | DNA Info >>

“Because of what they had been through they were not trustworthy of humans,” said Bryce Gill, the equine manager for the Kentucky Humane Society. “They were very cautious and scared.” While the Johnson County Sheriff continues to investigate the case help for the horses poured in from around the Bluegrass. | LEX18 >>

Andy Slivka was just 19 when he was deployed to Afghanistan, leaving behind a close-knit family to serve with his fellow Marines in Afghanistan’s Helmand Province six years ago. Then he met Zia, a 39-year-old Afghan man whose role would become far greater than an English interpreter for Slivka and his platoon. | Military.com >>