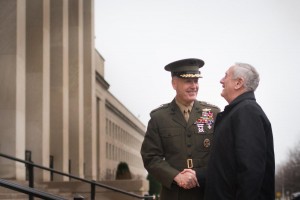 A federal hiring freeze imposed by President Trump on Monday affects thousands of open jobs at the Department of Veterans Affairs, despite the half-million veterans still waiting longer than a month for VA appointments. White House press secretary Sean Spicer confirmed Tuesday that the VA is covered under the freeze, which exempted the military and other positions deemed necessary for national security and public safety. | USA Today >>

Military Exchanges – retail stores that carry everything from appliances to jewelry – will soon be opened to honorably discharged veterans, the Department of Defense announced. The change means as many as 20 million veterans will be able to shop online at Army and Air Force Exchanges. Dubbed the “Veterans Online Shopping Benefit,” online shopping privileges will start on Nov. 11 – Veterans Day. | Alabama.com >>

Iraq’s oil is the property of Iraqis, Prime Minister Haider al-Abadi said on Tuesday, in reaction to U.S. President Donald Trump who argued that the United States should have taken possession of the nation’s crude reserves. In a speech to CIA officials on Saturday, Trump suggested the United States should have taken Iraq’s oil in reimbursement for the 2003 invasion that put an end to Saddam Hussein’s rule. | Reuters >>

The attorney general of Afghanistan has ordered the arrest of nine vice-presidential bodyguards over accusations of rape and torture made by a political rival, and the vice president himself remains under investigation, officials said on Tuesday. | The New York Times >>

Three quarters of a million civilians living in west Mosul are at “extreme risk”, the United Nations warned Tuesday as Iraqi forces prepared for a push into the jihadist bastion. A hundred days into a massive offensive to retake the Islamic State group’s last major stronghold in Iraq, federal forces and jihadists took up positions on either side of the Tigris River that divides Mosul. | Yahoo >>

Marine Corps leaders badly want their troops aboard an amphibious ship patrolling the African coast — even if that ship isn’t American. Senior officials are in talks with multiple NATO nations about the logistics of putting a company-sized element of Marines aboard an allied ship to provide presence, patrol hot spots and conduct theater security cooperation missions with African militaries, Military.com has learned. | Military.com >>

In the port city of Bremerhaven on Germany’s North Sea coast, approximately 4-thousand American troops and 25-hundred vehicles began arriving in early January. Known as the Iron Brigade, they’re from the Army’s 3rd Armored Brigade Combat Team of the 4th Infantry Division, based in Fort Carson, Colorado. This is the largest deployment of U-S forces in Europe since the end of the Cold War 25 years ago. It’s part of the European Reassurance Initiative and Operation Atlantic Resolve — a three-and-a-half billion dollar effort paid for by the United States to reinforce NATO. | PBS >>

An Air Force Base in Arizona was placed on lockdown for nearly two hours Monday while authorities acted on what they called an abundance of caution after a service member reported hearing what sounded like gunshots. Davis-Monthan Air Force Base in Tucson was still conducting an investigation after the lockdown was lifted and employees were allowed to go back to their duties. | ABC News >>

For close to a decade, Robert Armbruster woke up and put on the U.S. Marine Corps uniform. The uniform was more than cloth and thread — it was a visual reminder that he was a part of a mission larger than himself. Armbruster, a captain with the 3rd Battalion 23rd Marines in New Orleans, said he struggled to hold onto that sense of purpose in 2003 after he injured his knee while on deployment in Iraq and was sent home. The injury forced him to leave the Marine Corps on medical retirement a year later. | NOLA.com >>

The idea is to connect veterans interested in entrepreneurship with mentors, educational resources and venture capital. To the civilian, the regimented world of the military may seem in conflict with the kind of flexibility and seat-of-your-pants skills needed by entrepreneurs. But advocates say traits learned during military service — such as resilience, flexibility and autonomy — are valuable to anyone wanting to be an innovator. | Minneapolis Star Tribune >>

“It’s meant to save people’s lives,” said Waldrop, who became a manufacturer after careers in the U.S. Marines and local policing. “If you eat bad cereal, you might be sick for a day or two. But if this is bad, somebody’s going to die.” Waldrop’s interest stems from personal experience: A comrade in his company died wearing Marine-issued body armor during a 2005 IED attack in Iraq. | Military.com >>