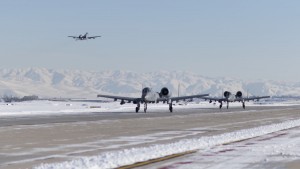 If VA treatment alone is insufficient in the treatment of our wounded service members, despite massive overhauls under Secretary Robert McDonald, the data may signify that either the VA is failing to provide adequate care, or the United States is sending too many people to war that it cannot care for. | Lima Charlie News >>

Veteran Affairs operates the nation’s largest integrated health care system, with more than 1,700 hospitals, clinics, and community living centers, while also providing benefits and services that provide financial and other forms of assistance. With more services come more numbers, and currently there are over 1000 phone numbers operated under the VA. | News Channel 10 >>

In May 2016, Amazon CEO Jeff Bezos announced the company’s goals of hiring 25,000 veterans and military spouses over the next five years and training 10,000 more in cloud computing skills as part of First Lady Michelle Obama and Dr. Jill Biden’s Joining Forces Initiative. The first cohort of apprentices under the new agreement will be trained for AWS’ Cloud Support Associate role. | Military Technologies >>

Prime Minister Haider al-Abadi and top commanders in the Counter-Terrorism Service, which has spearheaded operations inside Mosul, had already declared the city’s east “liberated” on Wednesday. | Yahoo >>

“Even though America has never waged a war so long and passionately intense in its entire history but if she insists on continuing her failed arrogant policies, one can foresee that she will ruin herself beyond repair due to a historically shameful defeat,” the article said. | News 18 >>

Residents of east Mosul held up their children and took selfies with Iraqi counter-terrorism commander Lieutenant General Abdul-Wahab al-Saadi after his men cleared Islamic State fighters from their neighbourhoods. But his tour on Saturday of homes once occupied by the militants was a reminder of the dangers ahead as security forces prepare to expand their offensive against the Sunni militants into west Mosul. | Reuters >>

Confirmed just Friday afternoon, new Defense Secretary James Mattis wasted no time in dispatching a letter to the American troops and civilians who now work for him. The recently retired Marine general — who needed a congressional waiver to serve in the civilian role — stuck with his signature plain-spoken style. “It’s good to be back,” he began. | Military.com >>

Tests of the Navy’s Type I working uniform in late 2012 showed it could catch on fire from a single match, would melt and drip when burning, and wouldn’t self-extinguish. There had not been a requirement for every sailor on board a ship to wear a flame-resistant uniform since 1996, but video of the incident alarmed sailors, veterans and their families. | Military.com >>

Soldiers who have the option of leaving the Army before October could land a big pile of money if they stay in — six figures for just 12 more months, in some cases, as well as choice assignments or schools when possible. The 2017 National Defense Authorization Act requires the active Army to get up to 476,000 soldiers in the next eight months, which is 16,000 more than they had planned. | Army Times >>

“Their experiences are your experiences, so you can talk about it with those warriors,” she said. “Other veterans understand what civilians don’t, and it makes connecting much easier.” | Daily Commercial >>

Before he stepped on a roadside bomb in Afghanistan, snowboarding was one of Justin Crabbe’s hobbies. Now, Crabbe — a 27-year-old Marine Corps veteran who lost both lower legs, his right thumb and several fingers in the accident — has been re-learning how to snowboard as part of a week-long program in Utah. | Wyoming Tribune Eagle >>

He launched the clothing line in August and offers jackets, vests and hats, made with recycled military blankets. He plans on adding sweatshirts, pants and mittens. The items are custom made locally by Harold and Jeaneth Deterling, owners of West Duluth Sewing and Design. The clothes can be purchased online or be custom fitted to the customer at West Duluth Sewing and Design. | Duluth News Tribune >>