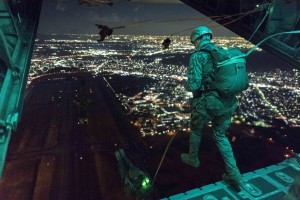 “I think top line, Bob McDonald stopped the bleeding,” said Paul Rieckhoff, founder of Iraq and Afghanistan Veterans of America. “I think we always knew VA turnaround was going to be long, hard and complicated. It needed to start with stopping the bleeding, creating a baseline of integrity and rebuilding trust. I think Bob McDonald did that.” | Stars and Stripes >>

Rep. Paul Cook, R-Calif., plans to introduce the Private Corrado Piccoli Purple Heart Preservation Act this session. The bill would penalize the sale of any Purple Heart awarded to a member of the Armed Forces by imprisonment up to six months or a fine, which would be determined by the Department of Justice based off the federal fine schedule.| Military.com >>

Paul Rieckhoff, founder and CEO of Iraq and Afghanistan Veterans of America, said his group will have tough questions for Shulkin. The organization is concerned about the department being led by a non-veteran. “He’s going to have to explain why he is best-suited for this job,” Rieckhoff said. | Daily Messenger >>

“It’s not as if it is a large, armed UAV [unmanned aerial vehicle] that is dropping munitions from the wings – but literally, a very small quadcopter that drops a small munition in a somewhat imprecise manner,” said Col Brett Sylvia. | BBC News >>

The United States’ longest and most expensive war — with the largest U.S. troop presence in a combat zone — was mostly absent from the presidential campaign. On the rare occasions Trump has spoken about Afghanistan, he has sounded as conflicted as his predecessor. | The Washington Post >>

“Today we celebrate … the liberation of the eastern bank in Mosul,” Shaghati told reporters in the nearby town of Bartella. He said that recapturing Mosul’s western half, which the jihadists still fully control, would be an easier task. Officers have previously said that the more densely populated west bank of the Tigris could pose additional military challenges. | Reuters >>

President Obama on Tuesday pardoned James E. Cartwright, a retired Marine Corps general and former vice chairman of the Joint Chiefs of Staff who pleaded guilty to lying to the F.B.I. about his discussions with reporters about Iran’s nuclear program, saving him from a possible prison sentence. | The New York Times >>

The Army has proven that the hoverbike its contractors are developing actually works during a flight demo with the Department of Defense. Dr. William Roper, director of the Strategic Capabilities Office for the Secretary of Defense, watched the large rectangular prototype quadcopter take off at the Aberdeen Proving Ground in Maryland on January 10th. | Engadget >>

In its 2016 index of U.S. military strength, the conservative Heritage Foundation gave the Navy a “marginal” rating. And there was no shortage of talk in the past election year about the American military falling behind. But it’s hard to make the case that the Navy is outgunned when it comes to aircraft carriers: It currently has 10 1,000-foot Nimitz-class carrriers in service. | Yahoo >>

Bradley Livingston is on a 4,000-mile journey to raise awareness for Post Traumatic Stress Disorder (PTSD) and he’s doing it primarily on foot. Livingston, a U.S. Army veteran who lives in Park Rapids, plans at the end of March to hike the popular 2,650-mile Pacific Crest Trail (PCT) from California to Canada. If all goes well and he completes the PCT, he’ll be back in Park Rapids to tell his story in September. | Park Rapids Enterprise >>

It’s the night before a special performance put on by people who have walked through life as a civilian, a member of the armed forces, and now as a student at Syracuse University. Kierston Whaley is one veteran in this show called ‘Separation,’ she spent 16 months in Afghanistan. | CNY Central >>

Davis, a Medal of Honor recipient, has been an eyewitness to every American president taking the oath of office since Richard Nixon’s first swearing-in on a cold January afternoon in 1969. Davis is returning to Washington this week and says he is eager to watch Donald Trump become the next president of the United States — marking his 14th ceremony he will get to experience first-hand. | NBC News >>