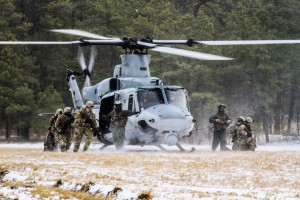 But the Department of Veterans Affairs Thursday, after more than a year of work, finalized rules that will allow potentially thousands of veterans stationed at the base — or surviving spouses — to receive automatic benefits if they have been diagnosed with one of eight diseases. | Task and Purpose >>

There are more vets per capita in Alaska than any other state. One out of every three people is either military or a dependent, according to Verdie Bowen, director of veterans affairs for the state. Alaska offers vets opportunities in oil fields, health care, mining, aviation, military contract work and the federal workforce. In a place where bears eat out of trash cans and moose rut in cul-de-sacs, nobody makes a big deal about owning guns. And Alaskans tend to value self-reliance and practicality, Bowen said. | Stars and Stripes >>

Significant improvements have come to the Veterans Crisis Line to address its troubled history of long wait times, unanswered calls and over-reliance on backup centers, according to Matt Eitutis, acting director of Veterans Affairs member services in Topeka, which oversees the crisis line. At one point, up to half of the workload was going to four backup call lines managed by Mental Health Association. | The Topeka Capital-Journal >>

Iraqi forces are nearing what is expected to be the toughest part of the fight for the northern Iraqi city of Mosul. As troops push toward the river dividing the city, they face new tactics from Islamic State fighters adapting to an urban environment and the limitations of U.S. air and artillery support. | NPR >>

The aid group thanked Afghan authorities and community members who helped secure the man’s release, but would not identify the abductors and their motives, or provide any details on how the employee was freed. | Reuters >>

The Army and local police are investigating the deaths of 11 Fort Hood soldiers who have died on and off the large Texas base in the past three months under mysterious circumstances, according to reports. | Fox News >>

Officers at the Marine Corps Warfighting Laboratory/Futures Directorate in Quantico, Va., came up with the idea last year to host a sci-fi contest to spur creativity, as well as get uniformed Marines to conceive of threats in a different way. A total of 84 entries were narrowed down to 18 finalists, who were paired with professional sci-fi writers—including “World War Z’s” Max Brooks—during a workshop co-hosted by the Atlantic Council. | Wired >>

One Marine was killed and a second Marine wounded while conducting small arms live-fire training Friday at the Marine Corps Air Ground Combat Center Twentynine Palms in California. Both Marines’ names are being withheld pending next of kin notification, according to a news release from the combat training base. An investigation into the accident has been launched. | Marine Corps Times >>

This was the fifth year for the hunt, which has proven to be very successful. Each year, word about the event spreads, and more and more disabled veterans reach out to Bair to express interest in participating. This year, six veterans hunted over three days during the regular Pennsylvania firearms deer season. Five of them each took home a deer. | Lancaster Online >>

Veterans aspiring to open their first business may not have scored a deal Saturday with celebrity “Shark Tank” investor Mark Cuban, but they got the next best thing: first-hand advice from one of America’s most recognizable entrepreneurs. | San Diego Union-Tribune >>

“I guess you can say it’s an adrenaline thing,” said Skeeters, who failed to stay on his bull for eight seconds. “Bull riding is my release from being in Afghanistan and places like that. It actually keeps me kind of calm and keeps me from going insane.” | The Augusta Chronicle >>