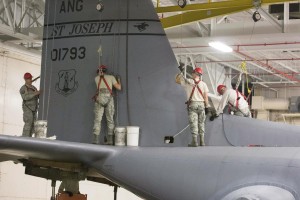 U.S. Senator Joni Ernst, a combat veteran, today sent a letter to U.S. Department of Veterans Affairs (VA) Secretary David Shulkin about the department’s recent decision to move ahead on the VA’s own internal medical scheduling software program. This move results in the VA juggling four duplicative scheduling programs all at once, which could negatively impact veterans’ care. | KIOW >>

Federal authorities are stepping up investigations at Department of Veterans Affairs medical centers due to a sharp increase in opioid theft, missing prescriptions or unauthorized drug use by VA employees since 2009, according to government data obtained by The Associated Press. | CBS News >>

“There’s concern about providers backing out of the network,” said Chief Master Sergeant of the Air Force James Cody, who is a member of the council and has seen the submissions. He asked about oversight DoD is providing, given the anxiety of some service members and families. “We’re already seeing some ill effects,” he said. | Military Times >>

Speaking at the end of a day of meetings in Baghdad with military commanders and Iraqi political leaders, Mattis said he is open to any request from his military commanders to aid the battle to retake Mosul and launch a major battle to oust IS from the base of its so-called caliphate in Raqqa, Syria. He would not provide details. | Chicago Tribune >>

After three years of being told they could not go to the front lines, U.S. troops advising Iraqi forces as they evict ISIS from Mosul no longer face those tight restrictions, according to the top U.S. commander in Iraq, Lt. Gen. Stephen Townsend, as the new defense secretary stood by his side in Baghdad. | Fox News >>

New Marine Corps recruiting commercials set to air next month will not include any tagline at all, said Lt. Col. John Caldwell, a spokesman for Marine Corps Recruiting Command. Instead, they will end with the word “Marines” and the Corps’ eagle, globe and anchor emblem. | Marine Corps Times >>

“He’s a man of tremendous talent and tremendous experience,” Trump said on Monday, according to a White House press pool report. “I watched and read a lot over the last two days. He is highly respected by everyone in the military and we’re very honored to have him.” | Military Times >>

Alfonso-Zea has found healing through Forgotten Not Gone, a local organization that focuses on preventing veteran suicide by promoting physical activity. “The isolation is really what kills people. Being alone, not being able to get out of the house,” said Forgotten Not Gone co-founder Kelley Guidry. | KTNV >>

“I have been doing this for 17 years, and I love it,” she said. “It is great to see so many veterans creating art and taking advantage of the recreation-therapy programs the medical center has for them. Many veterans find relaxation in the art and the camaraderie with other veterans they meet in the hobby shop.” | Herald Mail Media >>

“I faced a lot of the same barriers that those ladies faced,” Montague said today on “Good Morning America,” recalling a time when a fellow employee asked her for a cup of coffee and she replied that she’d like one too, adding, “Be sure mine has cream and sugar.” | ABC News >>